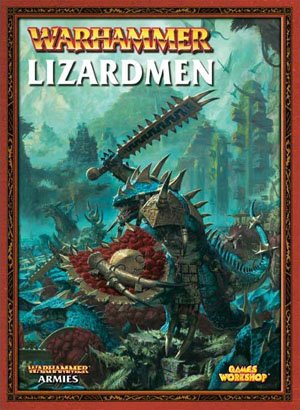 A guest review by iamaddj

As everyone should know February sees the release of Warhammer Armies: Lizardmen, a brand new army book for the Lizardmen of Lustria. Having gotten my hands on this beautiful new book I thought I’d take a few minutes to sit down and give some first impressions and thoughts on the army. First off let’s talk about a few of the unit changes.

The Slann
For many players the changes to the Slann Mage-Priests (giant toads of DOOM!) will be the most obvious change. Simply put the Slann is now a lackluster level 4 caster. Gone are most of his crazy abilities, replaced with the option to buy a handful of Disciplines, none of which are worth their hefty price tag. In addition the Slann now only picks spells from a single Lore of Magic, greatly limiting his potency. Coupled with a rather lackluster choice of magic items for the Slann, this is one lord choice I would stay away from.

Saurus Leaders
The mediocrity of the Slann is more then made up for by the power of the Saurus Oldblood. At half the cost of a Slann, the Saurus Oldblood is one of the best close combat lords in the game, with a base S and T of 5 and 5 attacks (1 more than most lords) he is equipped to hand out a major beating. Additionally, the ability to get a 0+ armor save using only mundane items means that he can spend more points on cool magic items, such as the Blade of Realities (more on that later). The only down side to the Oldblood is LD 8, which though low for a lord is balanced out by cold blooded. The Scar-Veteran (the hero version of the Oldblood) is also a good buy, though he loses 1 wound, 1 attack and 1 point of weapon skill, he keeps T5 and S5 making him an excellent hero choice. Stegadons
With an awesome new plastic model and some very good and inventive rules I think players can expect to see at least one of these babies in every Lizardmen army you face. While it IS possible to have up to ten of these in an army, you are more likely to face 1-3 of them. Overall the basic Stegadon is an overpriced mix between a bolt-thrower and a good chariot, I would avoid these unless your just trying to fit in a lot of Stegadons. The Ancient Stegadon, with the ability to put out 4d6 S3 poison shots and still be a effective combat monster seems like a much better buy. This book also allows you to buy the Stegadon as a mount for a skink priest in which case is come with a “Engine of the Gods” which allows you to pass out a few effects, much like the Dark Elf Cauldron of Blood. The real powerful one of these is the ability to inflict d6 S4 hits on all enemy units within 2d6 inches. Imagine four of these things working together to really mess up enemy units. On top of that, ridden Stegadons can join units, which can lead to some nasty combinations. Just think of the new mega unit of four Stegadons in a unit of Cold One Cavalry running around the battlefield just running everyone’s day.

Skinks
Here it is at last, the long awaited return of mixed unit of Skinks and Kroxigors, a old favorite from back in the day is back at last, and it is somewhat lacking. Now contrary to some rumors out there you can still field Skinks as a skirmishing unit and you can still field a unit of just Kroxigors. However there is now a new option that allows you to field a unit of ranked up skinks that may include some Kroxigors (one for every eight skinks). The Kroxigors have a special rule that allows them to set up in the second rank of this unit and still attack enemy units, sounds great doesn’t it? Well it has some downsides. In addition to being able to attack enemies, the Kroxigor’s rule allows enemies to attack the Kroxigors in the second rank, giving the enemy the choice to either attack the weak skinks and rack up kills, or attack the kroxigors which are the only real threat in the unit. In addition the unit doesn’t even protect the Kroxigors from being shot at, as any shooting at the unit is randomized, on 1-4 it hits skinks and on a 5-6 it hits the Kroxigors. To make matters EVEN worse the cost of buying eight Skinks for every Kroxigor effectively doubles the cost of a Kroxigor WHILE giving the enemy soft targets to attack. All in all you would be better served just taking a larger unit of pure Kroxigors.

Salamanders and Razordons
The Salamanders have undergone some major changes. They now shoot a breath weapon template (flamer template for the 40k players out there) an artillery dice worth of inches in front of them which hits at S3 but with a -3 to amour saves. This seems like an interesting ability and could prove to be quite devastating but I am still on the fence about these guys. The Razordons are effectively what the Salamanders used to be, each one shooting an artillery dice worth of S4 shoots. The major difference being that they have to roll to hit (though they do not take most of the negative modifiers) In addition when they stand and shoot (which they MUST) they get to roll 2 artillery dice and add them together for the number of shots. The downside to the unit is a 12 inch range and BS 3 which in my mind make these a twice as expensive Hellblaster volley gun. In other words, not worth taking.

Saurus Warriors
The basic Saurus warrior has changed little. A small boost to the armor save and the ability to use both attacks when using spears makes them solid heavy infantry. The lack of any special rule or spawning rules puts them behind Chaos Warriors and on par with Dwarves. However if a canny player was to throw, say a Stegadon with a character into the unit, or an Oldblood on a Carnosaur, then you could get some really nasty combinations going.

Magic Items
In a strange move most of the best items seem to be weapons, starting with the before mentioned Blade of Realities. The Blade of Realities is the big Lizardmen weapon, and boy is it worth it. Every time a model is hit by the blade they must pass a LD test (on their own unmodified LD) or be removed from the game with no armor, ward or regeneration saves allowed! Even if the victim passes the test, the attack still hits at the normal strength. While of only mediocre use against rank and file units, this weapon is a potent character killer, and is incredibly effective against units like trolls, with a low LD but multiple wounds.

Though The Burning Blade of Chotec is cheapest of the Lizardmen magic weapons it is worthy of mention. The ability to give a character flaming attacks is not to be sneered at in today’s game of Fantasy. Couple that with an additional -2 to armor saves (meaning a total -4 on a Saurus character) makes this a great weapon to give to a hero.

The Cupped Hands of the Old Ones is a very interesting Arcane Item that allows a wizard to ignore the effects of miscasts, and even better force enemy wizards to suffer them instead. I expect to see this item show up a lot as it is cheap enough to be given to a hero.

This army book breaks with previous Lizardmen books in a major way. The new Lizardmen army is going to focus on close combat, rather then being a magic heavy army. Over all I would put the Lizardmen army in the top tier of current armies as they now have some very interesting units and a lot of combinations. I think this army will be best run by a player who can really think outside the box, and come up with some wacky combinations. One thing I really like about this army book is there are clearly many different ways to now build a Lizardmen army. From hordes of Skinks, to a wall of Stegadons, to a fearsome battle line of Saurus warriors, options abound within this newest army book.

Physically, the book is up to current GW standards, and has the same organization and relative size as the other recent publications such as Warriors of Chaos and Dark Elves