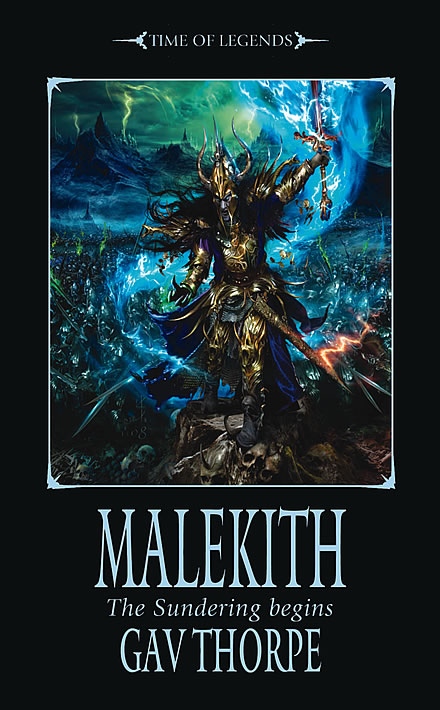 A guest review by Timo,

The Time of Legends series now consists of three parts: after Sigmar and Nagash, we now get a book about the life of Malekith (or at least about part of his life, since a life span as enormous as that of an Elf doesn’t call for completeness).

As I opened the package with Malekith in it, my first horrified thought was “an entire book revolving around Elves….!?”. Sometimes a man’s gotta do what a man’s gotta do, you know, so I heroically approached my bleakest vision: a book about elves.

Of course I don’t want to offend any Eldar and Elf players out there, but Elves are just not my thing. I mean, “they can’t even grow beards”!

Anyhow, the book covers about 1600 years in Malekith’s life. It focuses on his conquests in the colonies, the relationship with his mother and his irrepressible hunger for power… but let me start at the beginning.

After the death of his father, the first Phoenix King of Ulthuan, Malekith is refused the right to the throne. He remains prince of the Nagarythe and sets out to the colonies to try his luck there. Here he quickly gains power by military force, pushing further and further into an unexplored continent. After some time, he encounters some possible allies: the dwarves.

Dwarves? Now Gav Thorpe has managed to get my full attention!

A strong alliance with the dwarves as well as a deep friendship between Malekith and Snorri Whitebeard is established over a long stretch of time. This friendship along with the conquests seem to give the Elf a certain sense of purpose for a while. The ghosts of his pasts catch up with him at some point, however, and he begins to search for a new challenge. All this time he doesn’t even notice that he is right in the middle of a downwards spiral.

I may have been skeptical before actually opening the book, but after the first few chapters I was rapt. Malekith is written in a suspenseful, intelligent and very subtle manner; it doesn’t just throw facts at you, it doesn’t spell things out. You can’t ever pinpoint an exclusive reason reason why the main character slowly but surely heads toward his own demise.

What causes Malekith’s fall? Is it the influence of his witch mother? Is it his anger at Ulthuans’ government or even some dark legacy within his soul? All these questions help develop a kind of personality profile, which attaches the reader to the book and makes him want to read the story in its entirety as quickly as possible. Furthermore, you’re pushed almost to the edge of darkness yourself when the story reaches the point of Malekith’s fall: suddenly you’re on the last page and you realize that it will probably be another year before you can find out what happens after the betrayal.

Did I just use positive phrases regarding a novel about Elves? Yes, Sir. And that leaves me no choice but to give it a 5/5!

~Timo strikes again. Hmmm this “Time of Legends” sounds suspiciously like they are to add a “back in the mists of time, almost Horus Heresy” vibe into the Fantasy novel scene.