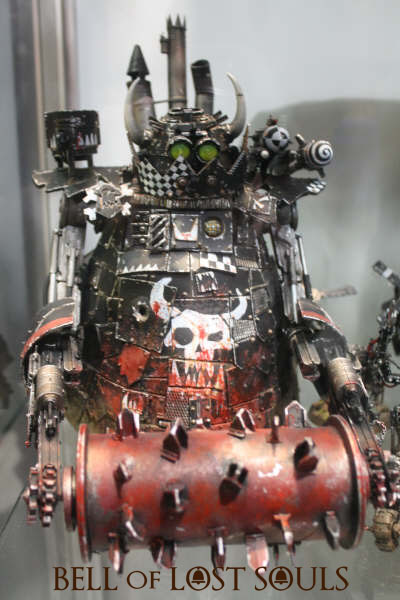 We just got word that the upcoming White Dwarf will be have a set of new 40k Apocalypse sheets for both the superheavies and the Stompa.This is what we’re hearing regarding the Stompa:

Instead of assaulting, each Stompa may move 6″ plus additional d6″ directly ahead
Every model ( friend or foe, not super heavy) that one Stompa moves over on a 4+ suffers a single Destroyer hit. Immobilized or stunned vehicles are automatically hit. Any models ending up under the Stompa are pushed the minimum distance out from under the stompa (to the standard 1″ distance).

Superheavies and Gargantuan creatures: The Stompa will stop and engage it in CC as normal, but with +D3 attacks for charging instead of the normal 1.

Standard terrain is destroyed, but impassable terrain stops the Stompa and causes d3 s10 hits to its front armor.

At the end of the charge roll a d6. On a 1,2,3 the crew gets carried away. The Stompa may not change direction during the next turn, and must continue the Stompede. If the stompa goes off the table edge it is removed from play.

The mega deff-rolla rules are roughly the same as the Stompede! rules, but with only one Stompa.

~Well, the Baneblade got a formation datasheet for 3 of them, so its only fair the Stompa got the Stompa Mob. That should be a highly entertaining face-off on the apocalypse tabletop.