Today Loremasters, the Neverborn of Nurgle claw their way to the top of our dossier.

Terrible news! A dire fate descends upon the Imperium–and that’s been dark enough as it is! The Emperor protects, I know, and I don’t want to be a heretic–but fellow loremasters this is an ill-omened day. The Deathguard have been sighted en masse. Breaching the Cicatrix Maledictum and pushing back our forces at Konor (in spite of our victories), the forces of Nurgle spread throughout the galaxy and immaterium alike–a rotting plague of corruption that will bring about the END OF HUMANITY!

There is no hope left–I’ve tried warning the other loremasters, but they scoffed and said that the Emperor would protect–but against forces like these, I fail to see how. Leaving aside the corrupted Astartes, the Neverborn of Nurgle alone are enough to smother the galaxy in fetid rot. Their putrescence is palpable… even now I can feel myself sweating. Infection! It must be! I’m not sure there’s much time left–so quickly learn about these foes and our impending doom.

Let us begin with the greatest of all of Nurgle’s…children. The Great Unclean ones…massive daemons who are bloated with disease and decay. Surrounded by rotting flies who swarm their organs as they spill out from their horrid forms, the stench alone is enough to drive back even the staunchest soul.

In combat, Great Unclean Ones wield enormous blades and maces of iron, crude, corroded cleavers and immense plague flails — each one dripping with pestilence. Frequently they carry a blade known as a Plague Sword – these massive, rusted blades are said to be dipped in the foul pus and contagion at the base of Nurgle’s throne.

Despite their completely bloated and putrid appearance, Great Unclean Ones are neither deathlike or morbid in character. In fact the opposite is true, and the daemons are motivated by all the trivial human enthusiasms which drive the living. They are gregarious and even sentimental in nature, and hold their followers dear, even referring to them as their “Children”, and taking an obvious pride in their appearance and endearing behavior. Even surrounded by the pitiful moaning of the sick and dying, they smile with pure-hearted benevolence, and their long, pus-coated tongues dangle from toothy, face-splitting grins.

Their appearances on the mortal plane are heralded by disease and desolation on a planetary scale. If an incursion is left unchecked, whole worlds can go dark: their populations reduced by six-sevenths, their feeble leaders filthy and raving, their very cities collapsing around them. Through it all waddles the beaming, bile-slicked plague-father, bestowing his blessings, borne along on a living tide of chortling, chattering Nurglings. Great Unclean Ones are beings of decay and entropy made manifest, and before them the works of man are but castles made of sand, perched on the edge of a storm-wracked sea.

We are dust before these grotesques! It even says it in the archives! The Loremasters who have come before know what I now have discovered. Let us trust in their wisdom that our foremasters have wrought. Indeed, even lesser foes spell the end of Mankind! 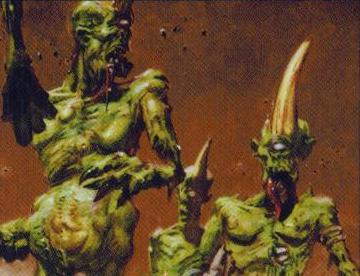 Unlike other Daemons that are born from a tiny piece of a Chaos God’s power splitting into a seperate being, Plaguebearers are born from the energy of mortal souls succumbing to Nurgle’s Rot.

These daemons have gangling, bony limbs, their bodies swollen with decay, so much so that glistening innards are exposed through rents in their skin. They possess a single, cyclopean eye and a single horn rising above their haggard, drawn faces, their bodies covered in filth and parasites. Despite the Plaguebearer’s unusual appearance, they are supernaturally resilient to harm, the gifts of their master having inured them to all pain. Plaguebearers are constantly surrounded by clouds of droning flies and chant monotonous hymns, their gait a staggering lope.

Plaguebearers carry rusted, heavy blades known as Plague Swords. These weapons are infused with foul infections and toxins that can make the merest scratch fatal. These daemons are solemn, cruelly efficient warriors in battle, despite their sickly appearance, Plaguebearers pose a lethal threat to anyone they encounter since their otherworldly toughness allows them to endure most attacks with ease.

Nurglings are concentrated pus and contagion come to life. They start as small blobs of filth, feeding on the rancid juices of the Great Unclean One’s innards until they are able to leave his body. Even then, much of their existence resolves around their “father”. They roam around the Great Unclean One and bicker among themselves for his attention, though there are always some unfortunate enough to get accidentally squashed or picked up as snacks.[1][2]

Nurglings are also eager to follow Champions of Nurgle around, be they mortal or daemonic, feeding upon the flakes of foul flesh these beings leave behind. They are willing to carry well favoured Heralds upon their bestowed palanquins and make the well-being of their Champions a personal matter. 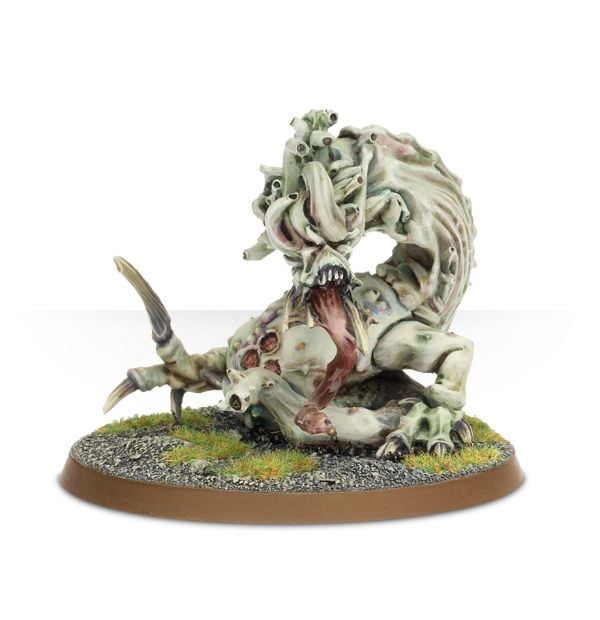 Beasts of Nurgle are huge, happy, slug-like creatures that slither across the battlefield leaving a trail of slime behind them. They incarnate the Plague Lord’s bountiful excitement, and show a friendly nature utterly at odds with the consequences of their presence.

The beasts are propelled forward with undulating ripples and clawed flippers, and include fronds of writhing tentacles that sprout from their blob-like heads and which expel vomit-inducing gasses, clouds of flies and deadly fluids; these poisonous tentacles they use to hug and wrap the playmates they find in battles, unwittingly causing their deaths. Once their “friend” lies inert, the Beast searches for a new one to play with. 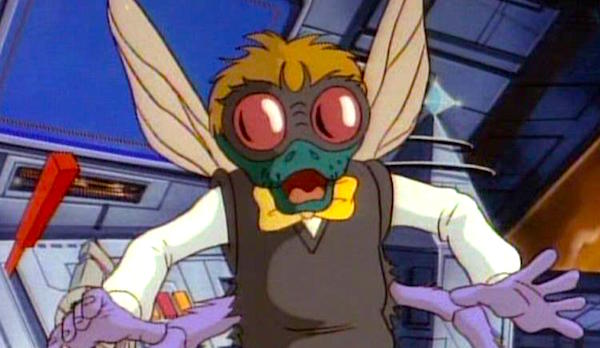 Rot Flies are Daemonic Steeds of Nurgle. Formally Beasts of Nurgle that have since transformed into nightmarish insectoid-like creatures, these colossal Daemonic insects have an appearance so repugnant it is said to be able to scar the mind. Rot Flies are among Nurgle’s most loathsome creations, and only the Black Library of Chaos speaks of the process by which they are created. Hatching from within the Garden of Nurgle, some Beasts of Nurgle develop bitterness at the rag-doll inactivity of their mortal playthings. This eventually leads to frustration and ultimately an aching resentment. Over the millennia, a seed of malice grows within the Beast’s heart, and the final straw comes when the Beast is betrayed unto death by those it wishes to call its friends. Seeking reconciliation, the Beast will put side its doubts and charge at its mortal target. Should it fall in the attempt and be banished back into the Warp, where it is then dropped into the Garden of Nurgle out of despair it can not return to its mortal plaything festers into a cocoon that will eventually give birth to a putrid fly. These flies have a number of horrifying abilities, such as spraying corrosive acid onto victims to liquefy them, allowing their remains to be sucked up and digested.

Even now I can feel their putrid presence in the libraris with me. Emperor preserve us all–we are lost!

(Editor’s note: Our loremaster was found gibbering in a corner of the library following a minor incident and has been sent to be volt-calmed. We regret the unfinished nature of this article.)

If you feel you may be infected, consult your Primer for instructions.

Author: J.R. Zambrano
Bell of Lost Souls Staff Writer and DM, J.R. covers RPGs of all stripes and on occasion eats sandwiches. You can ask him about either at [email protected]
Advertisement
Chaos Daemons Lexicanum Lore Warhammer 40k
Advertisement