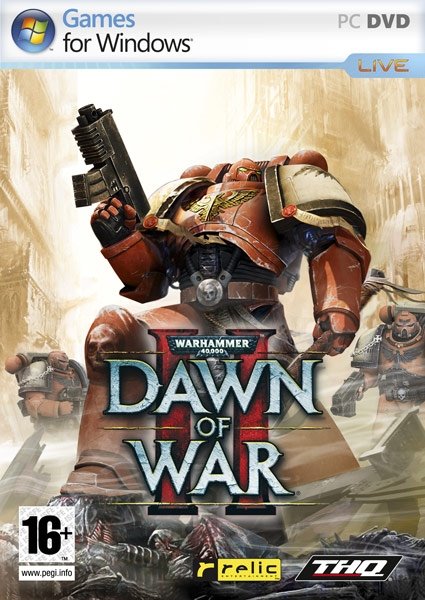 THQ’s follow up to every avid 40k players favorite RTS is finally in stores and I for one could not wait get my grubby little hands on it. Having watched the intro video posted some time ago I couldn’t wait to smash chitin under power armored feet and show those dastardly xenos witches the true power of the Emperor.

Popping the disk in to my computer I was greeted to a “robust” installation process. You install the game using the Steam client. “Awesome” I thought to myself since I have a large friends list and like the Steam client for finding servers to jump into for pickup games. I downloaded and installed the game through Steam in a jiffy and fired it up. The first surprise was encountered here, you have 2 CD keys, one for single-player and a second for multiplayer which you have to put in when you play online. Granted it does remind you what it is each time, but 2 keys seems a bit much.

Before you can fire up the game you must next create a Windows Live account in addition to signing in with Steam. The game only uses Steam to deliver the game to you; not any of its other features. Needless to say I got the game running after satisfying Microsoft and fired it up. The first thing you do is name your captain who looks just like Rocky IV’s Dolph Lundgren, which I guess is appropriate as you are a young up-and-coming Space Marine Captain of the Blood Ravens Chapter. You are dropped on a world with a squad of 4 tactical marines and told to assist your chapter master in defending one of your recruiting worlds from upstart orks led by a big mek. You get no real tutorial or anything, you just get thrown into the action which I actually appreciate. Any game that can be learned “on the fly” while the bullets are flying is well designed in my mind.

As soon as the game begins you discover why there is no single player campaign for anyone but the Blood Ravens, as you kill easily over 100 Orks on the first map leaving a mound of bodies everywhere your marines walk. It is about this point that you figure out that you are playing Space Marine the hybrid RTS-RPG, instead of the old-trusty RTS that Dawn of War was originally. And its OK. Its time to dispense the Emperor’s justice on the foes of man. The lack of base building and resource management is odd at first but liberating after a while as it leaves you time to slaughter and concentrate on getting to the next teleport relay to replenish the casualties if you take them. The game has an experience system that lets your squads and captain level up as they move through the game. You have 4 traits to put points into as you level which increases their stats and unlocks abilities. Be wary as you don’t initially get a good understanding of what’s more important: health vs. damage resist or how important having an additional accessory slot. Your first couple of levels might be wasted since you have to feel your way through these choices early on.

You find wargear along the way to equip your squad leaders and your commander. The Blood Ravens are apparently leaving chapter relics all over the sector, they should really get a handle on that 🙂 The game does a good job of making the wargear choices real decisions instead of the newest thing always being the best. You have a limited amount of spots to store gear , but you can trash old gear for a small XP reward with some notable exceptions, so be careful. You also gain items that you may not be able to use for a level or two which is a tad annoying. Game play itself is excellent representing everything that I love about Dawn of War, the knockback, AOE and cover systems are superb. The maps themselves seem to have changed very little in terms of detail but are still awesome and provide a great backdrop for the game. Be sure to take time to zoom in and watch you commander butcher everything in his path as well as your assault squad as the new kill animations are particularly neat. The boss fights provide a nice cap to the end of each level and gives you an idea how tough things like Wraithlords and Eldar Farseers should be (I hate Wraithlords even more now).

The difference in damage output between the Eldar, Orks and Tyranids seems to me to be pretty extreme. The Orks and Tyranids seem almost like cakewalk compared to the thrice damned Eldar who seem to randomly shred my squads if I’m not paying attention and their eagle-eyed snipers in building that are impossible to get rid of with frag grenades.

The final issue with game play you may encounter is some of your squad’s abilities such as Focused Fire or Battle Cry you want to be on at all times. In boss fights it’s a nuisance to have to constantly click it every 5 seconds while maneuvering out of grenades, bio plasma and the like. It would have been nice to have a macro to key all the abilities at once; but that’s just me being super-picky. Overall , I had an absolute blast, and DoW2 is the best thing to come to the computer for 40k players since Armybuilder. This is an awesome game that I recommend any lover of 40k to pick up and enjoy for countless hours. Remember Brother, The Space Marines fear no evil, for we are fear incarnate!