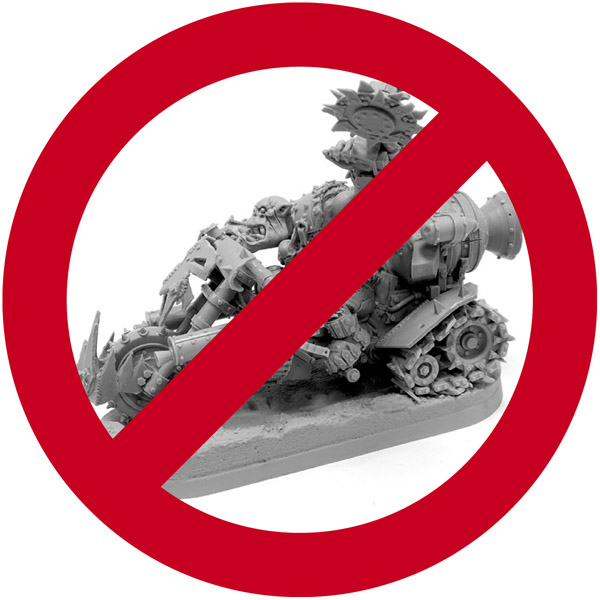 Hey all, Jwolf here. So reader Bob asked for a list of what to kill Nob Bikers with for each Codex. I didn’t want to go crazy and promote units that most people wouldn’t take anyway, so here’s the list.

Blood Angels: Terminators and Furioso(s) charging with Dante and Corbulo should kill them all.

Chaos Space Marines: Lash of Submission and Obliterators/Battlecannons. Follow that up with a charging Defiler and whatever is left is insignificant.

Chaos Daemons: Soulgrinders are very cost effective for killing Nob Bikers. Pretty much anything in the Codex is good for tying them up, though I’d suggest Bloodcrushers and Bloodletters are better choices. Tzneetch Daemon Princes and Fateweaver nearby means doomed Nobs, especially once the Warboss becomes a Spawn.

Eldar: Fortuned Seer Council charging Doomed Bikers = wins combat and can run them down. Fortuned Harlequins are also a good choice; saves aren’t as good but rends mean more wounds get through. A lucky Mindwar on the Warboss cripples the unit as well.

Witch Hunters: Lurk in Rhinos unit they charge, then pop out and use Divine Guidance flamer spam. It is best to shoot them dead unless you’re a fan of Penitent Engines, but that’s not terribly hard to do if you point the whole army at a single squad. Exorcists are also good things to lay into the Bikers with, though Lootas tend to suppress their fire effectively. The most fun possible way to kill Nob Bikers? A 2+ invulnerable Cannoness with a S:8 Eviscerator killing a couple Nobs and then running them down.

Daemonhunters: Nothing particularly good for the job, but driving around in Landraiders makes it hard for them to do anything to you. Shoot them a lot and charge with Grey Knights once they’re weakened is the best bet, and it’s not a great bet.

Tau: Shoot them with heavy markerlight usage to get them nearly automaticly pinned. Repeat until no more Bikers are alive.

Necrons: C’tan can keep the Nobs from ever being in close combat, so C’tan the Nobs into a corner and shoot them. 2 units of Nob Bikers are a big problem, so kill one first then get to the other.

Imperial Guard: Demolisher and Battle Cannon rounds, followed with gouts of Hellhound promethium while leaving nothing worth killing to attack is the basic plan. Guard can kill Nobs over several turns if they leave the Nobs no way to earn their value easily. Also repeated tank shocks will break them, which is possibly the most fun thing in the game.

Tyranids: Implant attack is the bane of Nobs. Jumping on a unit of Nobs with implant attack Genestealers and Carnifexes will kill them. A Lash Whip Tyrant and Guards will drop the Nobs attacks by 1/3, which means the Carnifexes get to eat them and keep going.

~So there you go Bob – you asked for it, you got it. If any of you have a more efficient way to deal with a large Nob Biker squad, Lets hear about it.