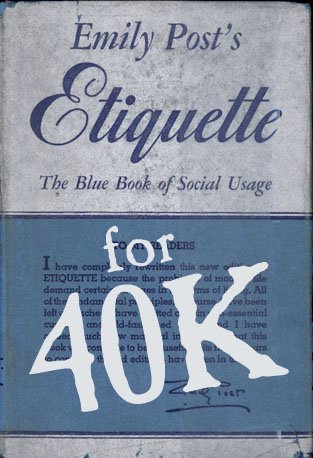 Jwolf here. There’s not a lot of need for preamble; I wrote about what is wrong with Warhammer 40K a few weeks back and touched lightly on etiquette. From the responses, it seemed worth doing to list some basic etiquette. Note that games among friends can and do break whichever of these conventions they see fit.

Physical Aspects:
-Have a typed list, with unit costs and a total. Ideally this would be in Army Builder or a similar format, but typed is key.
-Have all the materials to play the game – dice, measuring device, templates, BRB, your Codex.
-Be clean. Seriously, a smelly player is a bad thing.

Dicerolling Conventions:
-Announce what you are rolling for before rolling any dice.
-Roll the dice, pick up misses, then pick up hits to roll for wounds.
-Follow the same rules every roll on cocked dice – if it’s okay once on terrain, it’s always okay.
-Reroll any die that your opponent questions.
-So-called practiced rolling is cheating, even if it doesn’t work.
-Casino dice are only fair if they are rolled, and most tables simply don’t have space to roll them. They require 2 bounces minimun in Las Vegas when playing Craps for a reason.
-Bring a box if you want to roll giant dice.
-No special dice for leadership tests. If you have different dice for different conditions, you are attempting to cheat.

Measuring:
-Measure from front to front, not middle to middle (for your movement).
-Give the opponent the benefit of the doubt where possible with movement and templates.
-When moving a vehicle that you are also rotating, the distance between the closest spot of the original position and the furthest spot of the end position is the distance you have moved.

Behavior at the Table:
-Keep cool, losing your temper is certain to make the game worse.
-Play in a manner consistent with at least 6 turns being completed in 2 hours, unless you discuss playing slowly with your opponent before the game starts. This means that you may have to go faster than you would like to in order to make the game more enjoyable for your opponent.
-If you believe your opponent has broken the rules, ask him a question rather than making an accusation. Most competent players will fix their honest mistake or be able to articulate what they are doing and why they think it is correct.
-Be cordial and commiserate with your opponent if they have bad luck. Never complain about their good luck or your bad luck.

Other:
-Learn the rules. Don’t skim through the book one weekend, actually read the basic rules as if studying for an important test.
-Unless specifically playing in a no-holds-barred event, make lists people can enjoy playing against. Things like 2 Nob Biker squads, 2 Lash Princes, or 5 Landraiders make for no fun in most cases.

~Following these should keep a lot of the incidental rough edges out of your 40K experience and make the hobby as a whole more enjoyable. Now go politely and kill something. If you think I missed something or have your own Etiquette story to tell, you’ve found the perfect place.