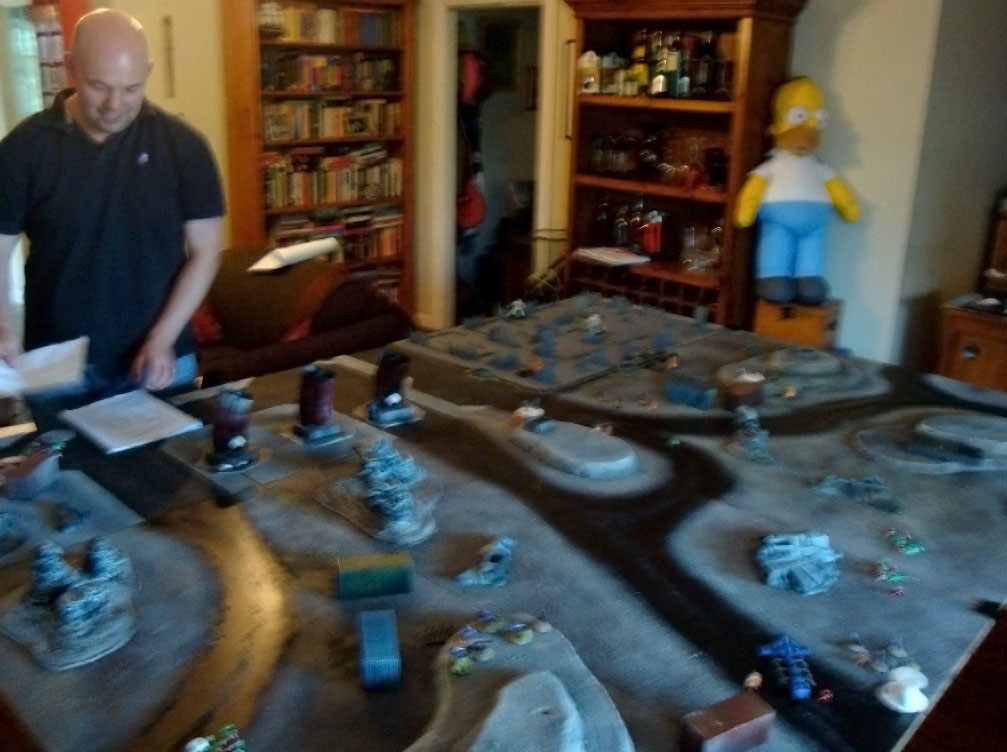 Starting on the Epic Campaign Trail

If you play a lot of tournament-style Warhammer 40,000 or Epic:Armageddon games with your mates, you eventually start looking for ways to vary the gameplay a little. One way of mixing it up a little is scenario play, which is a lot of fun, but–to my way of thinking–an even better thing to try is a campaign.

There are many ways to campaign in the Warhammer 40,000 universe, regardless of the game system you employ, but my preference is for the map-based campaign game.

In a map-based campaign, the battle games are over-arched by a campaign macrogame–each battle is a game within a game.

The difficulty with map-based campaigns is that the macrogame can, if overly complicated, start to overshadow the battle games, which is the opposite of what you should be trying to achieve with a campaign–it should be all about the battles.

For this reason, I like my campaign macrogame’s complexity level to sit somewhere just slightly above that of, say, Risk. To that end, I have developed my own set of campaign rules to enable all the Epic or Warhammer 40,000 games I and my gaming mates could ever want. This rulebook is currently set up as a two-player affair, and describes the Eldar campaign to cleanse the planet of Quintairn. It can easily expand into a multiplayer macrogame, however, and my intention is to start a wider Order vs Disorder campaign for our Sydney-based gaming group once my initial playtesting is complete.

First and foremost, my campaign rulebook provides a context for the Epic battles that will ensue. Second, it provides a framework for how the massive forces involved interact with the environment and each other. Third, it provides a set of rules that help the players define the magnitude and style of games that will result when the two forces eventually meet (such as battle-of-equals- or attacker-defender-style games).

My intention is to use these campaign rules for Epic-scale battles; nevertheless, I added a little thing to the campaign rules in order to allow the occasional Warhammer 40,000 skirmish battle because I really dig the interplay between the 6mm game and the 28mm game in the context of a campaign (the next step is of course to work Battle Fleet Gothic into the mix–yeah, baby!).

These very small-scale Warhammer 40,000 clashes (around 200 to 400 points) are intended to represent specific “strike opportunities” that might arise prior to the Epic battle. For example, prior to assaulting a fortified position (using the Epic rules), the attacker might gain an opportunity to take out the generators powering the defender’s emplacement weaponry. This would be played out using the Warhammer 40,000 rules, where victory means a significant advantage on the Epic battlefield, while defeat brings some minor disadvantage. My campaign rulebook describes various strike opportunities, but there is nothing to stop us making up the scenario on the spot.

The above is just a few tidbits of the sort of thing you can and should build into your campaign bible–it’s just my two cents worth, so feel free to take or leave what you will.

That’s enough blather from me about the hows and whyfores, anyway…checking out an actual campaign is way more interesting. To that end, a description of the campaign I am currently running with my mate horse appears below (we are mid-way through Week 3 of the campaign). Welcome to the Quintairn Conflict.

Initial Setup
Quintairn is the site of various Imperium military storage and re-supply facilities in the realm of Ultramar. Its proximity to Macragge brings it under the auspices of the space marines of the Ultramarines chapter, who remain involved in the world’s administration and day-to-day business at a superficial level. It is defended by a Planetary Defense Force (PDF) that follows standard Imperial Guard organisation and doctrine.

Other than as a convenient re-supply point between Macragge and the rest of the of Segmentum Ultramar, the planet retains little strategic interest.

However, a craftworld full of Eldar, on an endless patrol of once-Eldar worlds, has now arrived at Quintairn, which, as it turns out, was once a jewel of their ancient empire. They are very displeased to find it now sullied by filthy humans.

The Ultramarines maintain a fortress in High Stand, at Melenkunon Skyweir; it is usually not garrisoned, however, guarded and maintained by servitors only. Unfortunately for the Eldar, though, two Ultramarines vessels, the strike cruiser Tyrade of Destruction and the battle barge Distribution of Pain, were already en route to Quintairn for re-supply at the outbreak of hostilities, and these ships have just arrived.

The Eldar forces know that the proximity of Quintairn to Macragge is not in their favour—as it means that, given enough time, the Ultramarines can throw an almost overwhelming fleet at them. It is estimated by the Eldar leadership that a Macragge fleet could arrive within two months at the earliest, however, and so the Eldar have given themselves that long for the campaign before retaking the planet will be all but impossible. WEEK 1
The Eldar campaign to retake Quintairn began with a massive assault launched from space. The Eldar forces quickly took the north-eastern province of Tyran, Normere in the north, the central province of Andelain, and mountainous region of Southron.

Meanwhile, the stalwart Ultramarines decided upon a defensive strategy by digging in at Cavendown, High Stand (where their fortress is located) and Westron.

WEEK 2
The two sides adopted cautious stances, digging in and fortifying their territories, hoping to force their adversaries to dash themselves upon the hastily-constructed defensive structures.

The Ultramarines felt the pressure, however, as taking the time for these works left them with just six weeks to repel the invading Eldar.

WEEK 3
The time for waiting and posturing was over. The Eldar struck first, launching a ground attack of armour and infantry supported by Revenant titans upon the Ultramariens defending Westron. The ensuing battle was bloody. The Eldar probed the Ultramarines defenses up and down the line, and even broke through at one stage. The Ultramarines held their ground, however, and eventually forced the attackers back. Historians make special reference to the courageous and heroic (yet ultimately doomed) counter-charge made by elements of the Ultramarines 3rd Company. A Landing Craft deployed two Tactical detachments supported by Predators and Vindicators behind enemy lines in an effort to destroy two Revenant titans–a move that would have served to effectively extinguish the fires of Eldar morale.

Not only was this effort largely ineffective, but the taskforce was wiped out in an ensuing Eldar assault that the Landing Craft alone managed to escape. Despite this, the Ultramarines’ valiant defense was eventually successful, and the Eldar were forced into retreat.

The Ultramarines victory earned them no respite, however, as another great battle over the province of Southron loomed. At Southron, Ultramarines forces with a battle value of 4,400 points assembled to assault the heavily fortified Eldar defenders at Southron, whose battle value is estimated by scholars to have been around 4,000 points…

And this battle will be fought over the coming weekend. If you do or don’t want to read about it, please let me know–just sound off in the comments.

I hope this post has given you a taste for some Epic/Warhammer 40,000 campaigning, and that the creative juices are already flowing, causing a flood of ideas for gaming awesomeness. Also, my intention is to make my campaign rules available for download once we have playtested them sufficiently, should anyone be interested in trying them out.

Thanks to horse for providing the venue for our first campaign battle, for bearing with me while we playtest my campaign rules, for taking the pics, and–of course–for keeping it real. (You rule, man. Tell your friends.)

~Bigred here. How many of you guys have taken part in map-based campaigns, Epic or otherwise? Lets hear about them and what you most liked or disliked about them.