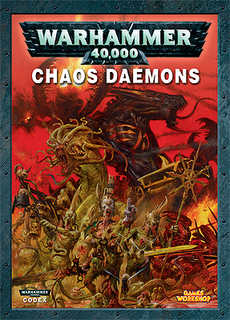 A recent request from a BoLS follower for tactica for demons led to a discussion amongst the Fly Lords. We decided to split up each of the Gods and since there was one of us that played a demon army comprised of the forces of a single God it worked out well. As likely the most active demon player of all, this is the first in a series that will touch on the aspects of all the individual forces.

The demons of Tzeentch are the only shooty options in the codex. Few other basic troops can out shoot horrors and flamers can annihilate entire squads at a time. When I devised my army list, I was going for an all around force that can generally handle itself at range, as well as possibly tie up squads for entire games.

The heart of my force is Fateweaver and my attack is centrally focussed around him. His ‘Oracle of Eternity’ ability is amazing and makes the army really difficult to take down with any sort of focused fire. I have been seeing more demon armies of the other gods adding him as well as more and more recent requests to borrow my Fateweaver model. Supporting Fateweaver are four squads of Horrors, each eight strong. I give each squad a bolt of change for anti-light vehicle fire, as well as an icon for reserves. One squad also includes the changeling who is one of the best 5 point upgrades around. I generally keep them as close to Fateweaver as possible, making them very difficult to wipe out. With three AP:4 shots each, they can annihilate lightly armored squads in a single round of shooting. Behind the Horrors are the Flamers of Tzeentch, one of the most potent template squads available from any codex. I run three squads of four in my army. Four breath of chaos shots will likely wipe out even a large squad of terminators or obliterators. I’ve even killed off tyranid monsterous creatures with them. The ability to glance vehicles can also provide a way to destroy weapons or at lease prevent it from shooting.

The anti-vehicle support is comprised of two Soul Grinders with tongue. I almost always include them in the first wave to try and destroy a heavy vehicle early, or if they fail to do that, they are incredibly dificult to take down in close combat. They will also cause instant death to nearly all character models.

Backing up everything is a Demon Prince of Tzeentch. He is usually equipped with nearly every base upgrade he can get, but I feel giving him multiple shooting attacks and Master of Sorcery makes him too costly. I use him more as a backup counter assault monster. I’ve been experimenting with one of my favorite shooting attacks from the book, Boon of Mutation. He is often in combat with character models as well and there’s nothing more fun then turning them into spawn.

I have not found a good place for Screamers of Tzeentch in my force yet. Their anti-vehicle roll may be better served in less centrally focused forces. I find though they may take down an enemy vehicle once, they are often wiped out by close range fire as they are too far from Fateweaver to benefit from him. I am also working on a Blue Scribes model as well as some other Tzeentch Heralds for some testing without Fateweaver.

So what’s your tabletop experience with Tzeentch? If you have any comments or questions, throw em out there, petty mewling of the material plane! Only the Ruinous Powers can say whether a treatise on Khorne, Nurgle or Slaanesh will be detailed next…. Thanks to Goatboy for the art!