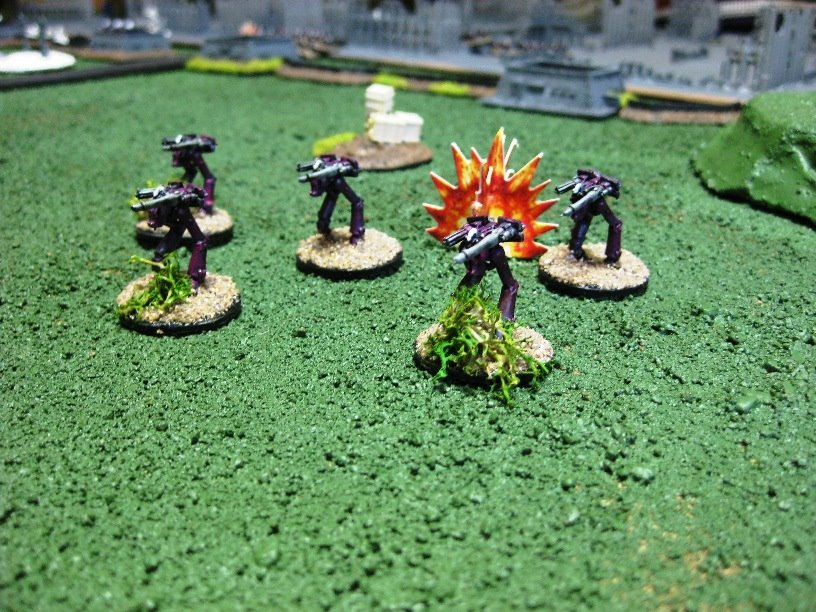 An Epic battle report by Gr00v3r

In my last post, I described the start of the Eldar campaign to cleanse Quintairn of its human defenders (PDF and Ultramarines). For those who missed it, here’s the set up:

CAMPAIGN SUMMARY
Quintairn is the site of various Imperium military storage and re-supply facilities in the realm of Ultramar. Its proximity to Macragge brings it under the auspices of the space marines of the Ultramarines chapter, who remain involved in the world’s administration and day-to-day business at a superficial level. It is defended by a Planetary Defense Force (PDF) that follows standard Imperial Guard organisation and doctrine. Other than as a convenient re-supply point between Macragge and the rest of the of Segmentum Ultramar, the planet retains little strategic interest.

However, a craftworld full of Eldar, on an endless patrol of once-Eldar worlds, has now arrived at Quintairn, which, as it turns out, was once a jewel of their ancient empire. They are very displeased to find it now sullied by filthy humans…

It is Week 3, and the second battle of the two required by the current turn has now been played.
The campaign map looks like this: WEEK 3:BATTLE FOR SOUTHRON
At Southron, Ultramarines forces with an approximate battle value of 4,400 points assaulted the heavily fortified Eldar defenders at Southron, whose battle value was estimated by scholars to have been around 4,000 points.

SETUP AND DEPLOYMENT
The Ultramarines attackers The Battlefield
The battle took place on the outskirts of the ruined Imperial city. The plains of Southron offered little cover for the Ultramarines, whereas the fortified Eldar defenders enjoyed the cover provided by DC2 walls and DC3 bunkers, as well as the ruins themselves. Objectives
The objectives were designated by both sides, as was each side’s forward operations base (blitz objective). THE BATTLE
The Marines went on the offensive immediately, teleporting no less than three Terminator detachments in behind the Revenant titans (destruction of which would hand the Ultramarines the Break Their Sprit victory condition). This strategy was an incredible gamble, as a failure to gain the initiative would without doubt doom the Terminators and cause the entire operation for Southron to fail. The God-Emperor was with the Ultramarines that day, however, and they caught the Eldar by surprise (won the Strategy roll). The Emperor’s most elite warriors engaged the Revenants in close assault, and managed to destroy them utterly. The Ultramarines followed up this victory with a orbital assault upon the Eldar forward operations base. An intial bombardment softened up the defenses, and the drop pods soon followed. The brave Eldar flanked the assaulting force, but the stalwart Ultramarines were able to hold their lines and advance to engage the defenders of the Eldar base. The Ultramarines took significant casualties storming the base, but the result was worth the cost, as victory was now well within their grasp (having taken the Blitzkrieg victory condition, and should have been able hold the Eldar blitz objective until the end of the game). The Eldar pushed in upon the Ultramarines forward base and the Reaver defending it (to take their Blitzkrieg and Break Their Spirit objectives) in an effort to change the momentum of the battle, but were repulsed when two detachments of Devastators arrived via Thunderhawk gunships to support the Reaver. And so the Ultramarines won the day (with an emphatic 2-0 victory).

PACKING UP
I hope you enjoyed this brief campaign battle report. Sadly, my campaign opponent, horse, is headed overseas for several weeks, so you won’t see any progress in the Eldar purge of Quintairn for a little while now.

I have plenty of Epic action up my sleeve, though, and will be bringing you a plethora (ooooo!) of Epic Awesome in future posts, including hobby-related posts and some of the best Epic battle reports I’ve found in my trolling of the intertoobs.

~Give it up for Gr00v3r folks. More epic stuff is coming your way.