LoTR: Misty Mountains by the Numbers 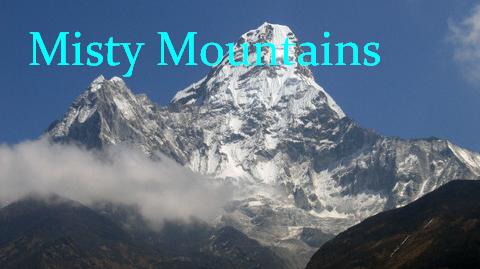 In part two of our War of the Ring ‘by the Numbers’ series we bring you The Misty Mountains.
Misty Mountains is a very odd list. It is made up of cheap troops, high offence/low defence cavalry, and really big monsters. I still haven’t quite figured out the best way to design lists using the Misty Mountains, but lets take a look at their units.

Infantry:
Moria Goblin Warband
. Wow, these guys are cheap. But, you get what you pay for. All of their stats, save movement, are low. However, the ability to take a shaman (magic), prowlers and large formations make it a tempting choice. These are good for screening your more expensive formations

Moria Prowler Warband. These guys are all about the special rules, Prowlers with poisoned weapons and two handed weapons. Don’t let these guy flank you, or you are in for a world of hurt. Even though they cost more than the Goblins, I think their special rules are worth it.

Gundabad Blackshields. Goblins with higher defence and strength. For the price, they are good. Unfortunately there are better choices for your rare formations.

Cavalry:
Warg Pack. Good strength and average defence with a low cost makes them a good choice. Like almost all other Misty Mountain units, the prowler ability will come in handy.

Giant Spider Brood. Extremely fast, great strength but poor defence. These guys are a total offence unit. You have to hope you kill your opponent on the charge, because if he has anything left, these guys are toast. They are almost twice as expensive as a warg pack, so choose wisely.

Cloud of Bats. I guess every list needs to have a unit that makes you scratch your head and wonder why the designers priced it the way they did. These are the same cost as the Giant Spiders, but less than half the strength, terrible defence and none of the cool special rules of the spiders. Sure they can move like flying creatures and case terror, but really not worth the cost.

Spider Broodling Swarm. These guys are awful. High price and low stats. I would never use these units…unless I am facing archers, in that case they are awesome. Being able to be defence 10 to shooting is a great way to spoil an elf’s day.

Monsters:
Spider Queen. Like the Giant spiders, the Queen is more offence than defence. Not sure she is worth two trolls though. Her Inspiring Leader (Spiders) makes her a good choice if you are running a giant spider heavy list.

Cave Troll. Not as impressive as its Isengard and Mordor brethren, it is still a tough beast for the points. Probably one of the better choices for a small points game.

Stone Giant. The Trolls big brother. This guy is tough, and gets the Extremely Hard to Kill table. Pay close attention to his shoot value; he can throw plenty of high strength rocks in the shoot phase. He is expensive, but is good in both offense and defence roles. No model for this guy means lots of people will be painting their fantasy giants grey for a while.

Cave Drake. Not an outstanding stat line as far as monsters go, but his special rule is nice. He is definitely a character killer.

Dragon of Ancient Times/ The Balrog of Morgoth. Now we come to the great debate. Which one is better? I’ll give you my take on it and let you chime in and tell me how wrong I am. Assuming we give the Dragon the magic upgrade, they are both about the same points (give or take a company of worgs). The Balrog gets 2 more attacks in combat and gets to roll 1 dice lower to cause a wound (form his strength). The Dragon can move further, has one higher defence and gets the Fire Breath shooting attack. For formations with a Defence less than 7, the Balrogs extra strength is negated. However, the dragon must make a choice, use the cool Fire Breath attack, or charge. Between the two, I would probably have to choose the Dragon, but not by much. Despite the iffy nature of the Fire Breath, that one extra point of Defence makes a big difference. Against your average strength 3 opponent, he will take half as many wounds as the Balrog.

Characters:
Durburz. Pretty low stats for a character, but gets the Overlord ability. Druzhag is a better choice.

Druzhag. Ok, here is a model that is the same price as the shaman, only with better magic. But that’s not the good part; spend a might point and get D3 Beasts for free! Even in the worst case scenario, he can get 120 points worth of beasts for no cost, and up to 360 with good rolling. How is this guy not worth more points. Never leave home without it.

And that’s it, Misty Mountains by the numbers. As always, let me know what I have overlooked.