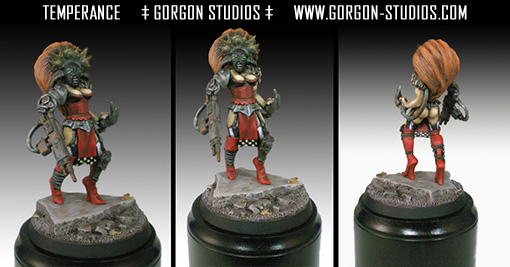 Hi guys a bit of community news for you this evening:

A year after its creation, the Vassal40k.com team are proud to
announce the release of their newest module: V40k Version 5.2
Including all the new Imperial guard units and plenty of other updates
this download is a must!

‘Temperance’
Gorgon is happy to make its first Collector’s range model available. We are proud to introduce “Temperance”, a 40mm post-Apocalyptic she-devil. Sculpted by Steve Saleh, this multi-part figure heralds Gorgon’s eclectic Collector’s range. Walking directly from the blighted and nightmarish wastelands of the dark future, Temperance makes a formidable addition for the collector, painter or wargamer. ‘At the Hot Gates’
Over the next few months, Gorgon Miniatures plans to release its first two ranges of 28mm historical miniatures. First off, will be the re-release of Steve Saleh’s excellent range of early Spartans, as a forerunner to a comprehensive treatment of the Classical era. Keep checking the website for availability, updates and previews of forthcoming figures.

Concurrently, Gorgon Publishing is working on both miniatures rules and some exciting RPG material. Stay tuned! The next few months will see lots of surprises. Again, all details of our products will be announced first on our website. Keep checking for updates.

~Vassal as always is cool, and Gorgon Studios is the baby of some of the founders of Adepticon. It will be interesting to see where this leads.