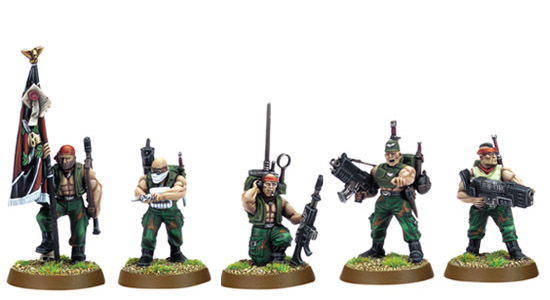 Hi everybody, Its VOTING DAY! Below we have the 10 finalists from the pool of entries BoLS received. We got a good selection of entries and it was very difficult to pick 10 finalists. Thank you to everyone who entered. The 10 Command Squads below are randomly ordered, and the summary of the Squad along with thier creator are listed BELOW EACH ONE. Look each one over, and judge them as you will. When you have selected the best one, vote in the poll. We will have our winner in a few days time, and they will recieve a brand new Valkyrie courtesy of Battleforge Games as a prize well deserved. The Cadian 22nd Regiment, known as the “Bloodhounds of the Emperor”. General Rokossov, known as ruthless leader is the glorious Company Commander. His veterans are real “Dogs Of War” and true specialists of their own military profession.
By Konstantin Kucher Commander Ivan Karamazov of the 501st Valhallan has been in command for the past twenty-two years and has seen more combat than most can stomach (his bionic left arm a battle wound left by a stray Las-Cannon shot from one of his more drunken heavy weapon crews.) His regiment, the “Ice Dogs” as they are referred to for their gritty determination and rather crude methods of warfare, has most recently been dispatched to hold defenses on an outer world against the encroaching Orks.
By Kevin-TF This command group came from a very small planet used for advanced tech research, since the planet has an acid atmosphere not compatible with human life the whole squad is forced to wear masks. They are well equipped and specialized in fast hit and run attacks, they are knows as the Heron Hounds.
By Luther Blisset The vostroyan Military is known for one thing, their ridiculous headgear. Although the Vostroyan headdress is considered a symbol of noble blood, Field Marshal Demitriev, commander of the 1st platoon of the Vostroyan 9th regiment, refuses to create such an obvious target for his enemy. He and his platoon are looked down upon as peasants by others in their regiments for refusing to don such foolish garments. Demitriev and his subordinates take comfort in the fact that the other prouder Vostroyans won’t be around long enough to mock them.
By Alessandro Kitchener Hauptmann Hermann Musk of E Company Cerberus VII Regiment and his staff.
Musk, along with the remains of the Regiment, disappeared following the purging of the Librarians of Ush in the services of Ordo Malleus Inquisitor Dunstable Llan. Hauptfeldwebel Schwartz carries a copy of Llan’s Inquisitorial Mandate under which the Regiment fought during the conflict. After-action reports archived by the Departmento Munitorum record tales of “saints” aiding the attackers, and Inquisitor Llan’s movements since the conflict are unknown…
By Simon Brown The Catachan XVII ”Swamprats” are the deadliest jungle fighters ever known in the Imperium. Led by the infamous Colonel Gator, the Catachan 18th fought the Tyranids in a seven year campaign on Koralkal VII.
By James Beng The Catachan 233, “Ol’ Painless”, were thought KIA on Kynlee Secundus, a world being devoured by the Tyranids from Hivefleet Jericho. They signalled for rescue 3 weeks later, 750 kilometers from their last known location.
By Joshua Goss Command squad for the 72nd Krieg Siege Company. They are currently being re-deployed further from enemy lines as they were a bit too aggressive in their shelling and accidentally demolished a key fuel depot that the 22nd Armored Regiment was set to capture. Commissar Von Lietzietz (far left) summarily executed Captain Strough and has taken command due his failure and negligence.
By Will Downey 82nd Platoon Command of the Iron Army of the 14th Grand Company led by Tiresias the Lost. Tisesias was a small boy when the 14th conquered his world and as the Warsmith strode upon the field of victory, Tisesias was brave (or foolish) enough to not look down. The Warsmith had him immediately blinded and promoted to the lead the 82nd platoon. He is accompanied by Niles the Unspoken, who is required to be gagged or else will continue to scream blasphemies until he passes out.
By Joseph Baird Colonel Aristides and his staff from the 9th Prosan. The regiment is currently stationed at Blutenanger, taking part in the Bavarius Campaign. Former achievements are the “Devensor Cadium” during the 13th Black Cursade the “Medusa Star” and the “Via Mortis”. The regiment was founded on the training-deathworld of Prosan in the Cadia system. The soldiers are well known for their light infantry and being far from home, the regiment has no more recruits but a lot of veterans.
By Johann Bauer

~I’m sure the entrants would love to hear your comments folks. We have a really great pool of painters out there and I would like to say THANK YOU to each and every one who entered. I really enjoyed the little stories entered and the variety of conversions and painting styles. Good luck, and may the best 40k hobbyist win! Poll, right column, VOTE!