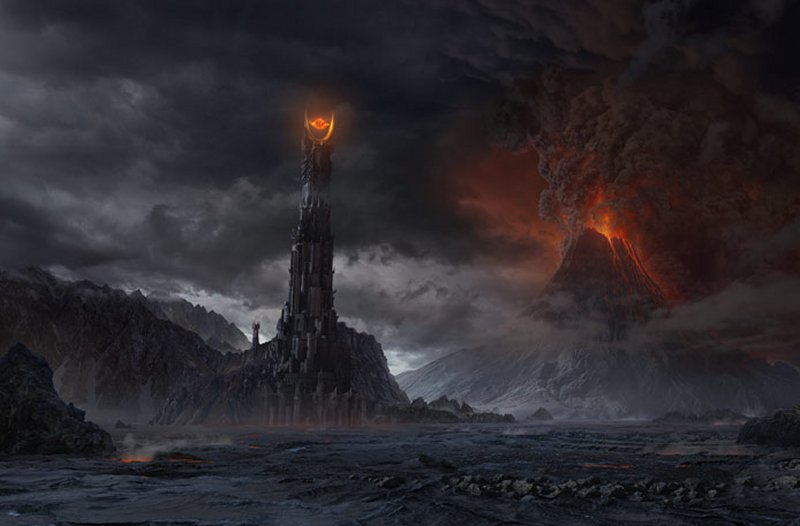 A guest tactica by: iamadj

In part four of our ongoing War of the Ring series I am going to discus one of the most iconic armies of all time, Mordor. This is it, the original Orc horde, the horde from which all other hordes spring. So lets get down to it.

INFANTRY
Mordor Orc Warband.
Mordor Orc are a cheap and flexible unit, able to take two handed weapons, shields or bows, along with the full list of command, including a Shaman. They also have the Mob Rule, special rule, meaning each company of Mordor Orcs in support will add 2 dice instead of 1, so big formations are more useful. The down side to Mordor Orcs, as would be expected, is a rather sub-par stat line, especially in defense; even with a shield they have a measly 5. Because of this I find them best taken with two-handed weapons. They will die in droves but they’re cheap so who cares and their large numbers will generate a massive amount of attacks, which the two-handed weapons will translate into kills.

Morannon Orc Warband. Morannon Orcs are Orc heavy infantry and are pretty much the equivalent of other armies main line infantry, such as Warriors of Minas Tirith, Isengard Uruk-Hai, Dwarf Warriors, etc. Use them as such. While many are drawn to them over the Mordor Orcs due to their better stat line, I prefer the sheer destructiveness of Mordor Orcs.

Mordor Uruk-hai Warband. I’m not really found of these guys, they represent a midway point between Mordor and Morannon Orcs, but don’t really seem to fit either role well. I feel that if I really want Uruk-hai in my army I would be much better off allying with Isengard.

Morgul Stalker Warband. This is a pretty cool, and underused unit. While their stat line is not amazing, S4 and prowlers means that they can really hurt units by hitting them in the flank. Wounding most heavy infantry on 4+s is nice. Ambushers is as always a nice rule and helps them get those much needed flank charges, while enchanted cloaks are just fun.

Black Guard of Barad-dur. Now this is a brutal unit, that can really wreck things. High F,S and D are the stats you want in your unit and these guys have them all. Having a captain with fight 6 means they can take on Epic Heroes without to much trouble. These guys really shine when taken with a Shaman (or Ringwraith) The combination of casting “Strength From Corruption” on the unit and their own Berserk rule means that they will on average be S8 on the charge (maybe 10), allowing them to tear up lesser units.

Shagrat’s Tower Guard. A legendary formation of Mordor Uruk-hai, with all the weakness of regular Mordor Uruk-hai, this unit does not really endear itself to me. Shagrat is a pretty good captain, F6 with 3 might, but doesn’t really justify taking the unit to me. The ability to spend might to automatically pass Courage tests is nice but of limited use on a small formation (only 3 companies) with low defense.

Castellans of Dol Guldur. Well whats to say about these guys, they are most likely the best single infantry unit in the game. High strength and defense (without shields!) are nice and make the unit good, but resilience two infantry are what make the unit amazing. Combine this with a host of good rules and they guys can form the center of any battle line and be counted on to destroy just about whatever they face. Expensive? Yes. Worth it? Totally.

Gorbab’s Morgul Rats. This is one of my favorite units in the Mordor list. Essentially a unit of normal Mordor Orcs with the ability of move At the Double! twice a turn, I like to combine these guys with the Witchking’s ability to allow units to automatically pass At the double! tests. This in effect allows the Morgul Rats to act as foot cavalry, great for getting flank charges with two-handed weapons.

ARCHERS
Mordor Orc Warband. Poor but cheap archers, they allow you to put out a lot of shots for not too many points. Not a huge fan of these guys myself.

Orc Tracker Warband. Better Orc Archers, with prowlers and Ambushers. These guys have the ability to pop out form hiding and shoot up a units flanks/rear. Prowlers means that even trough they are archers the enemy will think twice about giving you flank/rear charges. They are a little pricy for Orcs.

War Catapult Battery. The heavy artillery of the evil side. Expensive but able to put out a whole lotta hurt, I would take this in bigger games and watch then just smash enemy units.

Siege Bow Battery. One of the better of smaller classes of Artillery, the siege bow is far better then the Gondor equivalent and out ranges in Dwarven counterpart. This thing will tear up enemy units. Taking 3-6 of them may win you games, but it won’t win you friends.

Grishnakh’s Trackers. A legendary formation of Orc Trackers, these guys are pretty nice. Grishnakh has the Take Aim ability allowing him to temporarily increase the shot value of the unit, good when you just HAVE to have those shots, and his 3 might means more heroic shooting. Better then Orc Trackers which are already pretty good these guys have a lot going for them.

CAVALRY
Warg Rider Warband. Mordor’s one unit of cavalry. These guys are firmly in the realm of Light Cav. While they are a good way to get your heroes around these guys need to aim for flanks and rears to do much damage in combat. Don’t expect them survive much punishment either.

MONSTERS
Mordor Troll. The Mordor troll is pretty much your basic monster to which all other monsters are compared. 7s for a lot of its key stats means this guy will either wreck stuff, or die to the first attack he suffers. I’ve seen both happen a lot. Good for either running in groups, or alone on a flank you will see these guys in almost any Mordor army, and for good reason.

Mordor Troll Drummer. A more expensive troll, the drummer allows all friendly formations nearby to count as having a drummer in their formation, i.e. +1 movement. Other then that he is you standard troll. Expect to see with other trolls.

Mordor Troll Chieftain. The Granddaddy of all trolls, this guy can hand out a real beating. Better then a normal troll in almost every way (and twice as costly) with a host a special rules, use this guy anywhere a normal troll isn’t good enough. He can also be used a potent hero killer. I would use him to “lead” a small group of trolls.

Mordor Battering Ram. An amusing unit, useful in scenarios or if you expect to attack a lot of defended terrain. Useless in any other situation.

EPIC HEROES
Shelob. Shelob the Spider queen, while in the books she may lose to a single angry hobbit (and lets face it would you want to fight an enraged hobbit with a glowing sword?) in this game she will kill more then her fair shard of enemies, combining a good number of attacks, S7, prowlers and the ability to reroll misses, she is a deadly killing machine. She is best used against small expensive units as she is not to tough and even a small number of return attacks can see her slinking off to her lair, head hung in shame.

The Necromancer of Dol Guldur. The first (and cheaper) incarnation of Sauron in the Mordor list the Necromancer is one of the most potent casters in the game. With a Mastery level 5 and access to 3 lores he can really put the magical hurt on the enemy. Keep him out of combat, and out of danger.

The Nine are Abroad. A powerful unit combing all nine Reingwraiths into one uber-unit. This is an incredibly deadly unit, but will have a hard time earning its points back. Mastery level 10, means you can cast a lot of spells, but without the ability to cast the same spell more then once you will almost always run out of spells you want to cast before you run out of mastery. While this unit is nice, and can pack a punch, I would rather take the Ringwraiths as special heroes.

Twilight Ringwraiths. Weaker less useful ringwraiths best left for scenarios and the like.

Ringwraith/Winged Nazgul. A discussion of the Ringwraith abilities and which ones ones are best on foot or mounted is best left for its own article. It is sufficient to say that both are very useful choices are I would include at least One Ringwraith and one Winged Nazgul in just about any Mordor army I take. In particular I see no reason to ever take an Orc Shaman when for 25 pts more you can get a ringwraith, who knows more spells, has mastery 3 rather then 2 and a nifty special rule. In addition a word to the wise, be careful with your Nazgul, they are potent, but fragile.

The Mouth of Sauron. Another good Shaman replacement hero. I find the Mouth to be a relatively week hero and would always just rather take a Ringwraith over him.

Gothmog, Castellan of Minas Morgul. Gothmog is without a doubt one of the best heroes in the game. While 4 might, overlord, being an army banner and the all important Epic Strike all for only 110 points might seem like a really good deal, the “Master of Battle” special rule really pushes him over the top. Master of Battle allows Gothmog to mimic any enemy’s heroic or Epic action taken with 12’ of him, for free, even if he cannot normally take that action. Let that sink in. He can mimic for FREE. I can’t really describe how awesome this is, but Gothmog is a must have for any Mordor, or any evil player.

Kardush the Fire Caller. Another Shaman replacement hero. Kardush has the ability to cast spells of ruin, something with the Ringwriaths cannot do, which is the only reason I would take him over a ringwriath. Still if you plan on taking Kardush I would think long and hard on whether a Ringwraith can’t do his job just as well.

Sauron, The Dark Lord Of Mordor. This is it, the big guy himself, the Lord of the Rings, and boy is he a monster! Clocking in at a mean 500 pts of man killing and elf roasting badness, Sauron is the Lord of Mordor. With the ability to call free epic actions and getting free might Sauron can either make himself a combat monster OR a master wizard, without expending points. While Sauron is a massive beat stick, able to put out the hurt like few other heroes (or full units) he needs to be protected as he can be killed, and without much effort by some heroes or units.

Gollum. A neat little hero that joins enemy rather then friendly units. Gollum doesn’t have much effect on the game by himself, but rather increases the number of casualties an enemy unit is going to suffer. Gollum will almost always end up earning his 50 pts back so if you’ve got the model and the points you might as well try him out.