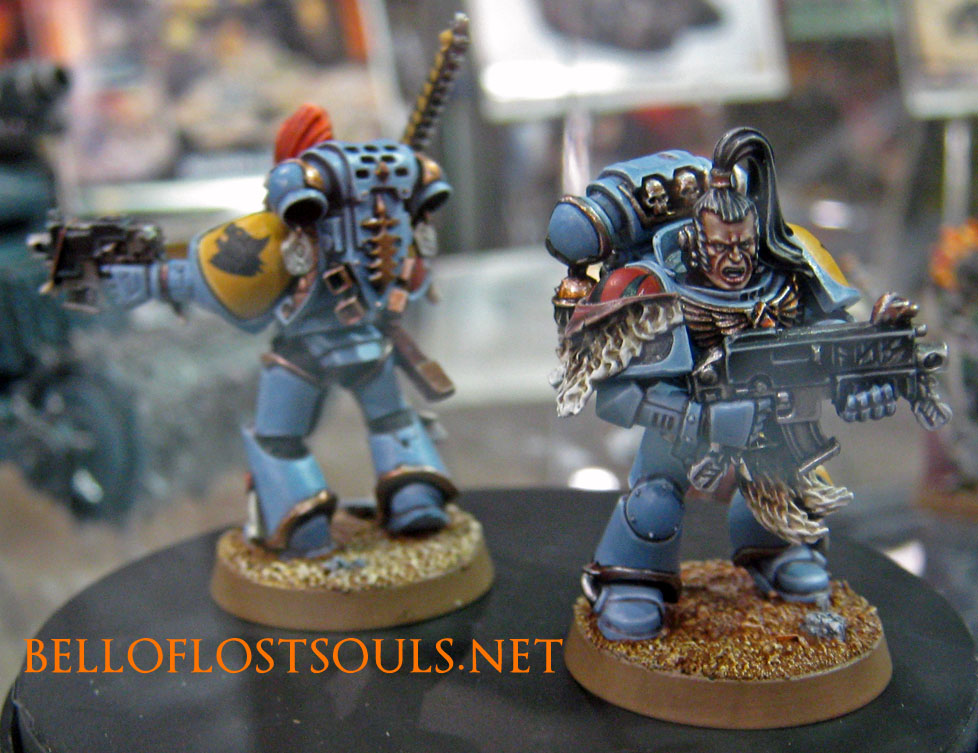 Lots of Space Wolves stuff kicking around the net these last few days. Lets get right to these:

I asked him about Björn and the rumour about his AV14. He responded that he couldn´t tell,but Björn would be the most survivable Cybot in Game.
We also talked in general about Space Wolves and he said that Space Wolves would have extrem stats and some nice special rules but would pay with a lot of points. “You will be always outnumbered”.
Logan Grimnar isn´t a fighting character,he is more like Creed, he gives you some special abilities like standing near a Long Fangs and saying you become tank hunter. He will also give even imperial guard special rules,because he is an amazing leader.
If you want a close combat monster you should choose Ragnar,he is young and berserker like.
All of the Special characters will be priced high over Gazhgul Thraka.

I also asked him about Wulfen and 13. company.
I was a little bit shocked when he said that Wulfen won´t come back as a unit. He wanted them more mysterious. You can still fill in some wulfen,but not as a unit costing 18 Points.

And last,i asked him about the Sagas. He confirmed that Sagas will give the complete army boni,not just a unit.

That´s all what i can remember, I hope GD uk will reveal more.

My brothers Njal the storm caller has granted me this vision so that you too may know the terrible might of the Space Wolves and howl as their heavy tread draws closer!

I know not of the new range of miniature representations of the sons of Russ, but I have seen the awesomeness of their almighty codex. Gather round now and listen!

Njal is back in all of his glory. The cyber raven joins him and the most easy comparison is with Tigurius, except that he wears terminator armour and carries mighty runes which blaze and improve his invulnerable save to a 4+. Truly unstoppable he remains.

A storm now covers Njal and this affects enemy shooting and combat prowess (-1 to both within 18″ or something like that) and at higher levels can destroy foes and cast them around the table with it’s mighty winds. Njal is the master of all six Space Wolf Psychic powers and yes, he is really expensive. Think 250+ points.

Bjorn the Fell Handed. Bjorn is incredibly strong, AV13 to the front and of course venerable. Put those two factors together and he is an almighty warrior. He has four attacks basic and is strength seven. He is also very expensive.

There is also a Telion type upgrade for the Space Wolf equivalent to scouts. This hero, more than three centuries old is the equivalent of a captain and yet with his unruly manners cannot be accepted among the battle brothers, not least because he stole one of the Chapter’s thunderhawks and then crashed it during his flight. He upgrades his squad, I cannot remember how.

All Space Wolves have counter attack and acute senses.

Wolf Guard are deceptive, they start off at a little over thirty points but they get very expensive very quickly. A wolf guard with Thunder hammer and Storm Shield weighs in at just under seventy!

There is a character with a special storm shield who can get an extra attack which represents him slapping his opponent with the shield when he charges. He also has furious charge and a thunder hammer that he can throw in a shooting attack. yes, a thrown thunder hammer. When it hits the foe there is an explosion and it reappears with a flash in his hands… Not bad eh?

Wulfen are gone as a unit.

There is a character who rides a Fenrisian wolf in to battle. It’s a bit He-Man esque, but in a good way.

Long Fangs, Heavy Bolters for only a handful of points, you know about the same as a meltagun for regular marines… Also you can carry five heavy weapons… It’s brilliant.

Kit? Oh yeah, every space wolf carries a chainsword, bolt pistol and boltgun. Extra attacks, I think so. You can kiss good bye to true grit though.

Oh and one last thing. Dark Angels are now not alone in being able to field Terminator only armies! SW’s can field all terminator armies as one of their characters makes it possible to field T’s as troops choices!

~Feel free to chime in or jump into the discussion in the Lounge here.