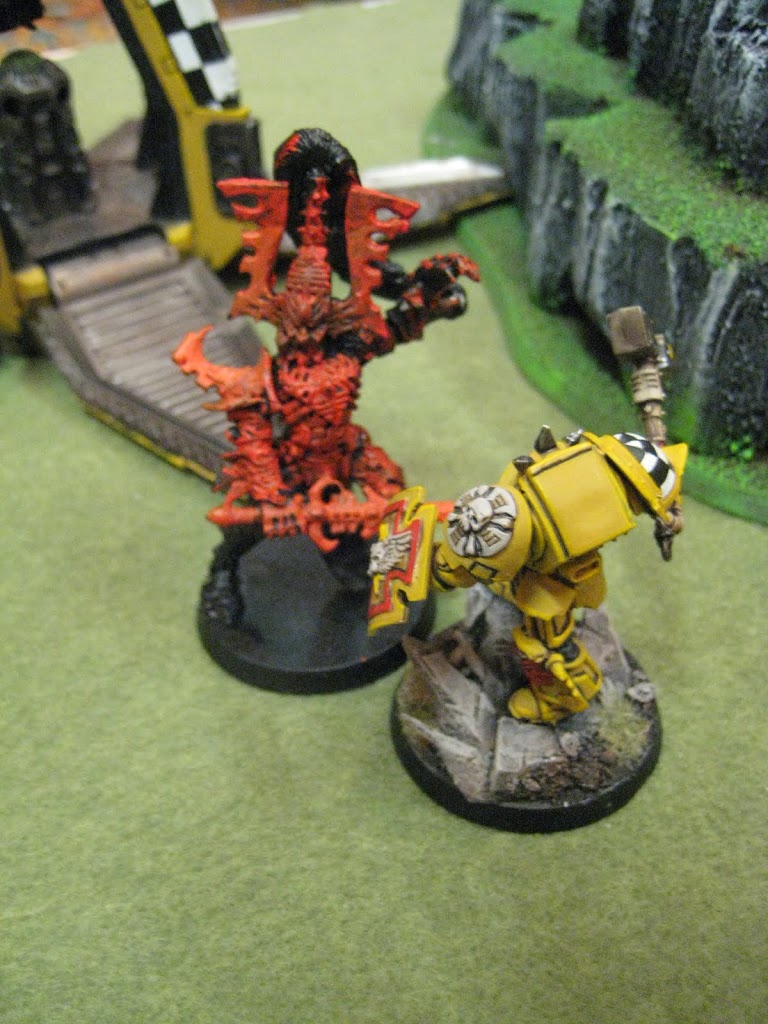 So I just completed 7 great games of 40k over the course of two days at the first annual Bell of Lost Souls Con. You can see the list I played here. It was an early morning start on Saturday, and it started off in a panic. They announced that pairings were posted, and I was nowhere on the list. Fortunately for me it was just a clerical error, and there was another person who had been left off as well. So with a little shuffling I was ready to sit down to Game 1. Objectives
Primary– Seize Ground
Seconday– Have more units in terrain than not in terrain at the end of the game.
Tertiary– Score 1000 or more VPs.
Bonus– Kill all vehicles and monstrous creatures +2
If your opponent has no heavy support left +2
If you end the game with an HQ in a terrain feature +1

Nick was a very new player. Being very familiar with the Eldar I was able to help him with the rules questions he had, but I wasn’t going to tell him tactics (I didn’t think it would be fair to him or me). He had a mixed force with Eldrad, an Avatar, a Wraithlord, a Falcon, and a boxed set worth of a half dozen Aspect Warriors. My droppod full of Lysander and Sternguard landed right on target and blasted Eldrad away with a bevy of bolter drilled hellfire shells. The picture above shows all ha had left at the end of the game. I got all the points besides a couple bonuses. 44/47. Objectives
Primary– Modified Annihilation (No KPs are awarded unless the enemy HQ is dead)
Seconday– Never place an HQ in a transport.
Tertiary– End the game with more of your units outside your deployment zone than in it.
Bonus– You gain bonus points equal to the turn number in which you destroy the first enemy HQ.

Colby was fielding a pretty butch army consisting of a Company Command in Chimera, four vet squads in Chimeras (2 triple melta, 2 triple plasma), Marbo, two individual Banewolves, a Battle tank squadron, and two single Demolishers. I was able to start collecting KPs pretty quickly thanks to Shrike getting a first turn charge on the Company Command, who were on foot because of the Secondary objective. My Land Raider threw a track on some rubble and spent the game far away from the battle, and the rest of my force just didn’t have the staying power to deal with that kind of firepower. I got the secondary (a gimme) and tertiary, plus 3 bonus. 25/48. Objectives
Primary– Annihilation
Seconday– Score 1000 or more VPs.
Tertiary– Destroy all non-vehicle troop choices.
Bonus– +1 for each category of your opponents army with no units left at the end of the game.

Adam had a pretty cool Rhino based Veteran Assault army with Dante, Corbulo, and a few Attack Bikes. I was over aggressive with my forward elements (Shrike’s infiltrating Assault Terminators and Lysander’s Sternguard). If I had held back he would have come at me anyway, but instead I put the control of the game in his hands. My mistake. I managed to get the Secondary by Dante making a unit of Devs fallback, he couldn’t catch them or stay within 6″ of them, so in my turn they swung back around and blasted Dante in the face with a lascannon, pushing me up over 1000 VPs. 15/47. Objectives
Primary– Seize Ground (5 objectives)
Seconday– Kill HQ.
Tertiary– Have units in terrain
Bonus– +1 for each category of your opponents army with no units left.

Well it took until my fourth game to play someone from Austin, but to my great fortune it was actually someone I had not ever played before. John was fielding an army of mechanized Sisters with a whole mess of Exorcists and Immolators, all led by Saint Celestine and her Seraphim bodyguard. The army started with an impressive 12 Faith points. He held a large portion of his army in reserve (I’m still not sure why). My first turn pressure units were able to kill a Rhino, and the whole squad inside whilst my Land Raider rushed towards his lines. I was able to kill his Seraphim with some great shots from my Thunderfire cannon (causing 19 wounds in one turn kind of great shots). My melta Tactical squad accounted for both Exorcists and an Immolator. By turn 5 all he had left was Saint Celestine, who was saved from being charged by Shrike and Lysander because the game ended. 33/47. So I did not treat myself nicely on Saturday night (mainly due to goatboys bachelor party) and it showed in my Saturday morning game. Apparently I also somehow upset my dice. I’m sure I wasn’t razor sharp with my tactical decisions, but I couldn’t roll a dice through a wet paper bag. Some examples from the game: Shrike charges a missle launcher dread (no DCCW) and is dead within three rounds of combat (pictured above), my Assault Terminators charge a unit of regular Terminators and are wiped out to the man, my Land Raider immobilizes itself trying to take an objective late in the game. Maybe it’s just this table (it was the same one I played the Blood Angels on). 0/47. That knocked me down about six tables. ugh. Objectives
Primary– Capture and Control
Seconday– Annihilation
Tertiary– Have more units in the opponents deployment zone then they have in yours.
Bonus– +1 for each table quarter
+1 for killing the highest cost HQ

So I finally played someone who I knew from Austin, guess it had to happen at some point. Michael had a bunch of over 200 point big bugs supported by a big brood of Warriors, some ‘without number’ Gaunts, and a unit of outflanking Genestealers. This time taking the fight to the enemy didn’t seem like the logical choice, but it was definitely the right one. Shrike got a first turn charge on the Warriors, almost died, but the Terminators caught up right on time to save him. Lysander and the Sternguard came down (Pod landed on his objective) and hellfired the Flyrant to death. The game devolved into a big scum in the middle (Lysander v. 3 Fexes), while my rearguard objective holding force staved off iminnent assault two times. One of his Fexs destroyed the contesting Drop Pod, but my Land Raider rolled in at the last minute to steal the win. 46/47. Objectives
Primary– Modified Sieze Ground (6 objectives) at the end of each turn roll a d6 for each objective, on a ‘6’ the objective takes off. If a player is controlling the objective at the time, then the models are removed from play, the objective permanently belongs to that player, and the unit that was holding it deep strikes back onto the board the next turn.
Seconday– Have units in all four table quarters.
Tertiary– Kill half the units in the enemy army.
Bonus– Assault the enemy with an HQ choice +1
Have a surviving HQ +2
Have a scoring unit within 3″ of the table center. +2

In round 7 I played jawaballs of ‘Way of Saim Hann’ fame, who is a real nice dude. He held a bunch of his units in reserve, which I didn’t understand. I combat squadded onto a couple objectives and decided to ‘outflank’ Shrike and the Terminators for the first time in the tournament. It was a fun game, but it is kind of a blur because of how tired I was at that point (that point, ha, I’m still exhausted). I had two of my units take off and claim objectives permenantly, while jawa had one of his units do it. He managed to kill my Land Raider in the last turn to grab an objective and force a 2-2 tie. PIctured above is Lysander getting killed by an exploding ‘Baal’ Predator. 37/47.

~All together combined with my paint and excellent sports scores I pulled off 9th overall. Not bad considering the size of the tournament. I’m already stoked about next year. Woo! Any of your other BoLScon attendees feel free to drop in your stories, thoughts, and best moments from the weekend’s festivities. You can also follow the BoLScon threads in the Lounge.