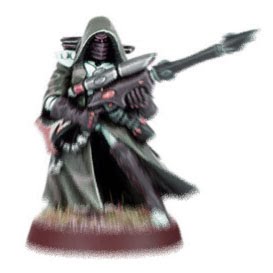 Pinning Tactica 101 ~ A Guest Tactica by Way of Saim-Hann’s: Fritz

Anytime you roll dice in 40K bad things can happen…failed armor saves, perils of the warp, exploding vehicles, etc., and it is with this idea in mind that I try to get my opponent to roll those dice as often as possible- which leads us to the topic of this article: pinning.

Pinning as a viable and useful tactic rather then just a little used rule on page 31? Why yes! Consider this army:

Everything in the army has a chance to pin enemy units, Eldrad has eldritch storm, harlequins with the death jester, rangers with the sniper rifles, and the ‘lords with missile launchers. With nine chances to score a pin each turn, it opens the concept up as a tactical option which is used to control your opponent’s shooting and movement. Examples of pinning in action from two recent games…

Two groups of nob bikers zooming towards my two harlequin troupes- one nob group is bigger then the other and even with doom backing the clowns I can’t take on both going one to one. I need to bomb the bigger biker group with clowns and throw in doom for good measure. What to do then about the other biker group since they will then charge me next turn? Pin them of course with my rangers and wraithlords! Cause a wound, roll the dice, and the second bike unit is pinned buying me time and some breathing room.

Now I won’t say you should rely on this any more then counting on melta guns to actually explode tanks and then roll a “1” on the damage chart, but the concept does open up options that are often never considered by some players. They key to a pinning load out is to not sacrifice your build to favor pinning- it should be something that can compliment your army, adding to it as opposed to focusing it or narrowing it down, you are also going to have to find a way to build in pinning shots from multiple units to make sure you have the redundancy to make it count when you need it.

~A crazy idea? Maybe, but sometimes left field is all you need to give you that slight edge in a game for the win! Obviously throw all this out the window if you are facing mass fearless troops, but hey, not everybody in the 40K universe is fearless…yet…

~Bigred here, lets give it up for Fritz in what will hopefully be the first of many future articles here on BoLS. I’m sure he will be jumping into the comments and would love to hear your thoughts on pinning.