BFG: How to Inflict Damage 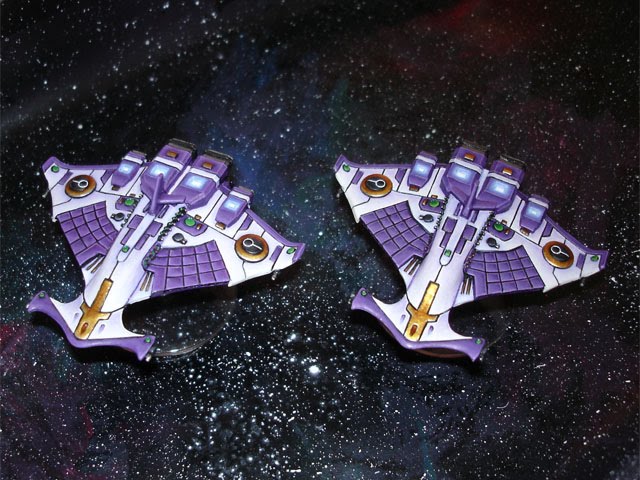 Fracas here, you Naval Cadets. Before I get further into each Battlefleet Gothic fleet list, I want to go over how, in game terms, you inflict damage on your opponent ships. In each and every phase of the game there is an opportunity to inflict damage. How is that for a wargame!

Movement phase.
To inflict some hurt while moving, you have to ram. To ram a ship must first pass a special leadership test to go on “All Ahead Full.” Then if the movement takes into base to base contact, a leadership test is immediately required to actually hit the target ship. This leadership test is easier when ramming a larger ship and harder when ramming a smaller ship. The result of ramming is a number of dice used to inflict damage; the number being dependent on size of ship. Shields are ineffective against ramming. Both ships are at risk for being damaged but if rammed in the side or rear, the rammed ship will likely take more damage than the ramming ship. Once ramming attack is completed, the ramming ship must move forward and completes its remaining move. However, a ship can only make one ramming attack per phase. Note that since ramming requires base to base contact, cruisers may opt to be on a large flying base rather than small ones, and thus increase its ability to ram. Obviously doing so will make it more vulnerable to ordnance attacks.

To inflict some hurt while your opponent is moving, you must have deployed ordnance attacks (torpedoes or bombers) in the path of his ship. Once in contact, ordnance attack is immediate. Shooting phase.
Always start shooting with batteries rather than lances. Each hits (whether damages is inflicted or not) typically leaves a blast marker on your target. Battery weapon effectiveness will be degraded if it has to fire at or through any blast marker. Since shooting is by one ship or squadron at a time, batteries based ships should fire first, mixed battery-lance ships should be in squadrons, and lances should be used to finish the destruction.

To increase a ship’s shooting effectiveness, consider rolling for that ship to go on special order “Lock On.” This will allow the ship to re-roll all misses. However, all special orders, except for one, must be declared at the beginning of the movement phase, so a little forethought is required.

The one exception to when to check for special order test is the special order “Brace for Impact!” Bracing can be tested for against any attacks made by your opponent, thus this is typically during your opponent’s shooting phase but can also be tested for during his movement phase (against ramming) or the shared ordnance phase, or the shared end phase. Bracing gives your ship a 4+ save against each damage inflicted but must be declared and test for before the number of actual damages inflicted is determined. Note that a failure to brace against one ship’s attack does not prevent rechecking when another ship attacks whether it be against the ship that previously failed a Brace for Impact test or another ship that has not even tested. In general, if you estimate that there is a reasonable chance your ship will be crippled in the entirety of your opponent shooting phase, not just from this one ship currently attacking, you should consider going on Brace for Impact.

One amusing target for attack during shooting, as well as during the ordnance phase, is to attack your opponent’s hulks. A lucky roll may cause it to explode and engulf surrounding ships with equivalent of lance attacks (4+ to damage). Note though that any ships within range can be damaged by such a blast, yours and his. If your ships are more resilient against such attacks, say by having hollofields or with active saves, it might make tactical sense as well. The Ordnance Phase.
The decision to launch ordnance must be made at the beginning of the movement phase. This is because other than the launching of ordnance is free the first time and does not require the special order “Reload Ordnance.” Every subsequent launches require the special order to be passed and this has to be declared at the beginning of the movement phase.

Since the ordnance phase is shared, once you are done with moving your ordnance, your opponent will get to move his. Thus the first thing I do is use my fighters to take out his ordnance. This will clear the board for my ordnance to move and attack. Note that bombers or assault boats can take out an equal number of enemy fighter. This might come into consideration because a) he cannot reload ordnance until his own movement phase, b) he might fail his reload test and thus his other planned special orders as well and c) you might want to sacrifice some attack craft so that others may reach their target.

Since most torpedoes cannot maneuver and must move directly forward, I typically attack with my torpedoes first. Defensive turrets can only defend against either torpedoes or attack crafts. If there are threatening bombers within reach, your opponent will have to decide whether to waste his turrets against less effective torpedoes or save them for against a more vicious bomber/assault boat attack that may never come! Next I direct the bombers to their target. Unlike torpedoes, bombers can attack any enemy ship within range. Assault boats are killer against escorts but are less likely to kill capital ships. The basic assault boat attack has a 5 in 6 chance of taking out an escort. I save them till the end to finish the kills I need as I usually prefer to kill capital ships before escorts. The End Phase.
There are two ways to inflict damages in the end phase: boarding and teleport attacks. Since boarding must be declared in the movement phase when a ship ends its movement in base to base with an enemy ship, it seems best to resolve boarding before teleport attacks. Larger ships are more effective against smaller ships but both ships can be damaged.

Final Thought.
You really have to plan ahead with BFG, starting with what special orders you want for each ship/squadron, and prioritizing the order to test for because once failing one, you cannot test the remainder. In addition, knowing how to inflict damage and more importantly how you want to inflict damage will affect your fleet’s ship choice, as well as how to safeguard against them.