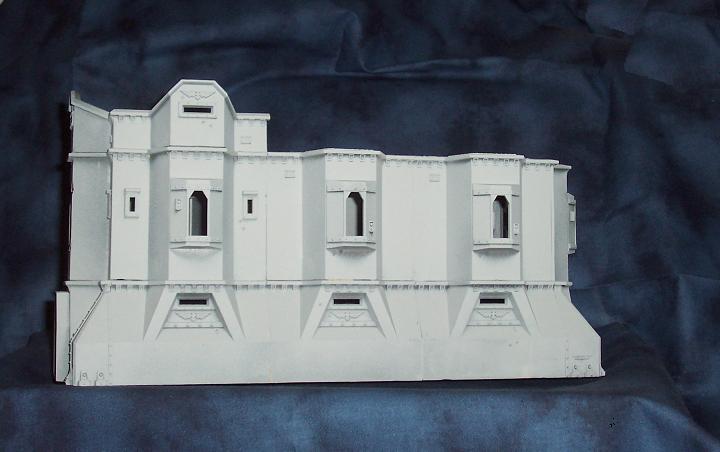 It’s been a while since my last kitbash project, so I started a new one this past weekend. After building the Capital Imperialis last year, I wanted something that would look impresive, but be very simple to build. I liked the idea of a Leviathan and, fortunately, GW was kind enough to give us the Bastion kit to make it with. Now, this may not be the nicest Leviathan on the block, but you should be able to make it in just a few weekends worth of work.

Two Bastion boxes gives us the perfect base for a Leviathan. I’ll give more detailed ‘How-To’s in a later post, but for now you can see that I took 2 bastions minus their 4th walls. I then used these wall sections to connect the two towers into a single long structure. The top crenelations are only over the front section. I lowered the floor by 3/4″ on the middle and rear section to give it a walled in look. The front gun-window was removed and I’ll raise it up by about 1/2″ and put the battle cannon in there. I’m thinking about converting the door on the front to house the main cannon, but will have to see what kind of cool bits we can find at Home Depot. I’m unsure what to do with the treads. It could have then coming directly out of the bottom of the structure, or I could build out the bottom 1/2″ and have them sit a bit wider than the structure (similar to the capital imperialis).
I’m totally in the dark for the top of the front section. I’ll need to roof it in, but it will be difficult to make it look right with the ‘up-and-down’ crown look it has going on. It’ll also need to be topped with antennas and such.
Anyways, it is on it’s way. Expect more updates in a week or two.