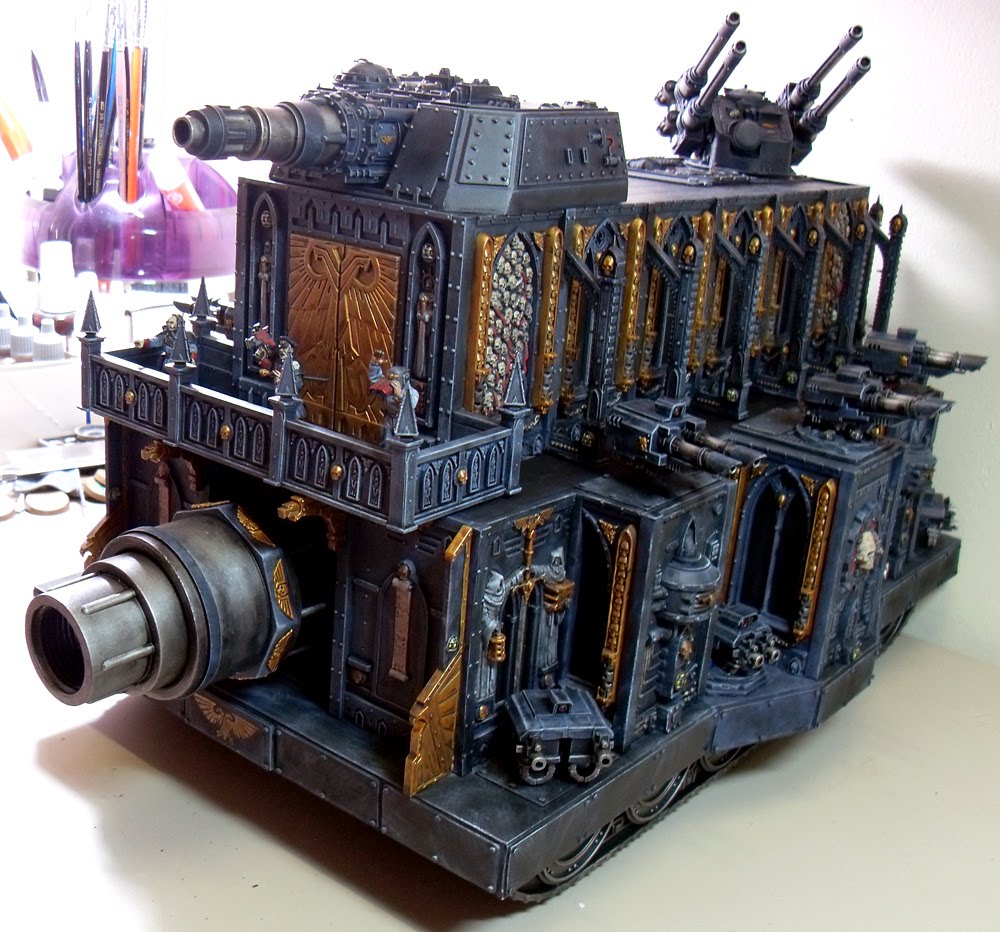 Today is crazy project day, and we have a wonderful scratchbuilt Leviathan for you guys from BoLS reader: Tim Kline. Lets see how he did it. Take it away Tim:

I found an old tank toy in my attic while I was cleaning and I thought it would make the perfect base for something BIG for Apocalypse, like a Leviathan. I found the Lords of Battle PDF on Bell of Lost Souls and built mine based on the rules they made. I edited mine slightly and added a hydra turret to the back. It just looked like it needed something back there, and I could always use some extra AA guns for the big battles. Here is an updated PDF I made with my “upgrades” 🙂 www.timkline.net/wargames/leviathan.pdf

It took me about 6 months off and on to build and paint. I used plasticard to build the armored base around the tank treads. I used about 4 boxes worth of COD terrain to get all of the wall sections I used to build the first and second “floors” (and now I have plenty of leftovers for building lots of terrain). The Doomsday Cannon was made out of 2 pieces of PVC pipe, I just picked something that would look good painted up. For the top turret, I bought a Shadowsword model and used some plasticard to give the cannon housing a bottom (and used the rest of the model to build a 2nd Baneblade!). The Hydra turret on top is just the Forge World model. For the side guns, I ordered 4 Land Raider Terminus upgrade kits and that gave me all of the lascannons and heavy bolters I needed, and I have plenty of bitz left over to build other things, like some Vendetta conversions. The tank measures 14″ long, 10″ wide and about 11″ tall. As you can see from the pics, it really dominates the battlefield and towers over almost everything (except for titans). It’s not too heavy since the insides are all hollow. To transport it for games, I just wrap it in a towel and put it in a box. I doubt there’s any army carrying bags that will be big enough for this 🙂 Tim Kline has been into GW’s games since 1993. He started with 40K and got into Fantasy also around 2000. He’s collected many armies over the years but Imperial Guard is his “main” one, in addition to his Alienid army, a tyranid army based on the Alien movies. If you would like to see more of more of Tim’s stuff, feel free to check out http://www.timkline.net/wargames/

~Lets give it up for Tim and his great labor of love. That Leviathan is just fantastic! If you have any comments or questions, I’m sure he will be along shortly. If anyone has a really special project you want to share, you know where the BoLS mailbox is.