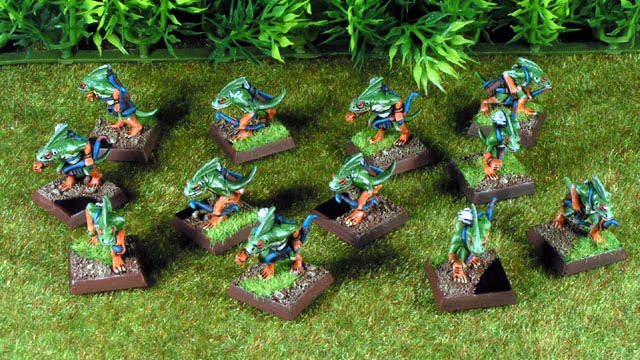 A guest article by Jordan Braun
Skirmish units are incredibly valuable on the the tabletop. Here are three ways to utilize some of the awesome abilities skirmishers provide.

Skirmishers are harder to kill off at range with ballistic shooting then normal rank and file. In general skirmishers are relatively low point cost. By getting your opponent to shoot at your skirmishers not only will this lower the damage he may cause, but, you will also keep your more valuable troops alive.

In the picture below you can see the more costly outriders are screened by empire archers. This protects the outriders from the dark elf shade’s repeater crossbow fire. Giving the unit a solid turn of full strength firepower. Flank charges are not once what they use to be. However, they are still vastly important for some of the older armybooks. Skirmishers flee using the closest model center to the center of the charging unit. This means you can easily get an enemy unit to be put in a rather bad position if they choose to charge your skirmish unit. And if they don’t charge it buys you one more turn of not having to face that unit in combat. This really only works with non immune to psychology skirmishers. Sorry Tzneetch flamers you’re already good enough!

In the picture below you can see some Fleshounds who have to charge the skirmish Skaven globadiers or they will be doing nothing this turn. But once they do, they open a flank up to the Clanrat unit. The Clanrats would probably not stand much of a chance vs fleshhounds in the front. However, they can handle them in the flank with little trouble. Utilizing the skirmish rules combined with the there must be room for your model rules you can protect units flanks from some of the nastier large flyers. Knowing that units have to charge the closest visible skirmisher you can set up situations where they either charge your skimishers or force them to move again. Again this is used with skirmishers that have the ability to flee charges. ~Here are just some of the ways skirmishers can effectively turn the tide of battle. Skirmishers make excellent meat shields for expensive elite troops from shooting. They can also give you the upper hand in the movement phase. How about it BoLS readers? Have skirmishers made it into your fantasy list lately?