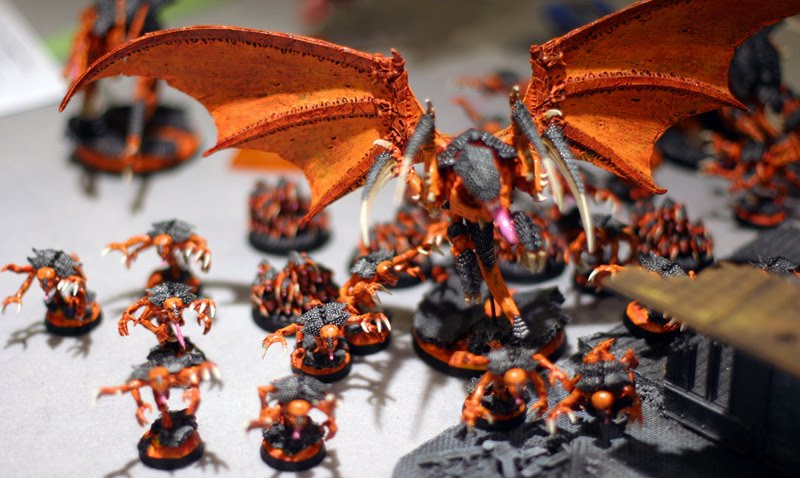 Darkwynn here. One of things that people ask a lot is what was the process that I take when developing a list. When I crack open any codex and start looking into it I immediately begin started to process the rules, costs, and FOC organization as I look through all of the units. I am going to take you through the way that I develop lists and look at units. Some people might recognize this process if they have ever taking an undergrad business class.

The tool is called SWOT and I usually use it on Business or Business related item that I do daily. The SWOT stands for: Strengths, Weakness, Objectives or in this case Opportunities and Threats. I break down each unit and then break it down the army list as a whole, looking at all my options, stats and going from there.  Here is a first pass SWOT list for the Tyranids. I’ve been processing all the Tyranid info that is being talked about and putting on my thinking cap.

Threats: Heavy Close combat unit such as TH/SS Terminators, Units with high amount of rending attacks and IG plasma command squads with bring it down.

Opportunity or ideas on play: Leaving them in the unit of Termagants to give them an added CC ability and to come out of reserve through the Trygon holes. It will give units such as Thunder Wolf Calvary and Nob Bikers a Second thought of attacking as testing on LD 8 on 3d6 or die. He will also be great to join Hive Guard also if they come through the hole or shore up their CC if need be.

Threats: Flamers and Strength 10 shots. My worry about this is when he is with Termagants and the unit gets hit with a high amount of flamers. His whole unit will die but he will be left stranded and will be out in the open.

Opportunity or ideas on play: These guys are great for blowing up Transports. 6 Str 8 shots at Bs 4 that don’t need Line of sight will be great for popping those light tanks.

Threats: Units rushing into combat as once they are in combat they are not going anywhere. Marines will tie them up for a long time as two attacks at strength 5 that allow saves isn’t going to kill a lot of guys.

Opportunity or ideas on play: The idea is with these are you needed to get them close and in range to pop the big targets. The landing spore gets them close enough to take out those key targets. They have a better chance of staying around and hitting for at least two rounds with the 3+ invaluable save. You just need to make sure that you land your spore away from any type of close combat infrantry.

Threats: Staying away from

Trygon
Strength: High Toughness with High wounds, High number of attacks, High Strength, Deep Striker with a tunnel behind it

Opportunity or ideas on play: The idea I have with these is overloading your opponent and having three high toughness and high amount of wounds in your face and ready to attack. It WILL force your opponent to deal with this unit somehow. Most lists will not be able to drop two Trygons a turn.

Threats: Very little… KILLS EVERYTHING. My only worry is TH/SS Terminators which you will need to have the Trygons double up on to attack or have the Alpha warriors attack TH/SS Termonators to kill them off.

The list gives you 11 Toughness 6 models on the table. Five of those models are with 6 wounds and can be given Feel no pain. Idea behind the army is it will be weak in turn one or two but once it ramps up its going to blow you over unless your opponent is able to control the flow of the game and start taking down models. You will have 12 strength 8 shots and 3 strength 10 shots that are reliable in the sense they will still be around turn 3 or turn 4, which isn’t great, compared to other codex’s but it gives you some ability where the previous codex didn’t have. You have to target key units to at least shake them, buying your big bugs time to get into combat and they will just rampage through everything. The Zoanthropes with the landing spore and the Termagants coming in from tunnels hopefully force your opponent to choose either the Trygon or the Zoanthropes or choose something but they will be forced to lose units and it will have a waterfall effect on their army.

The only thing that that I might adjust from this list is as a personal perference is dropping the Alpha warriors, one or two of the regeneration upgrades, and some of the hive guard. It would allow me to buy a Hive Tyrant with the +1 reserve and Tyrant Guard to give a close proximity combat unit that can support the Tervigon or Hive guard. It won’t be great in making its points up in combat but it does make sure that I will be able to form an overloading flank more effective. The other idea is drop a unit of Hive guard and get a Deathleaper to reduce a psyker’s hood LD down by d3 so you have a better chance to get off your psker powers but you reduce your some of your anti tank down to kill transports.

~Thoughts are welcome gentlemen, on both the list and the SWOT process applied to army construction. Darkwynn out.