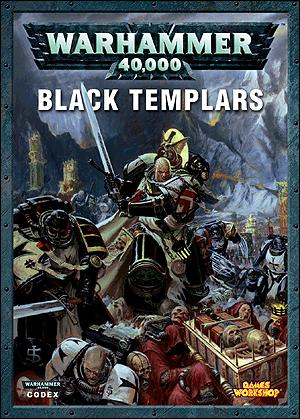 I have loved the Black Templar since the start of time.

Since I started Warhammer 40,000 I’ve played many armies. Starting from Eldar in the Rogue Trader days to the my latest Imperial Guard. The one army that I’ve always had a soft spot for are my Black Templars. I remember when they first came out and the Emperors Champion could challenge annoying powerfist sergeants and protecting himself from the other squad’s members as the pair dueled to the death. They also had Sisters of Battle supporting the army that handled the range firepower. The editions have changed and so have my play styles and list over the years. Here is one of the latest versions I use for 1850 on the previous GT circuit.

Emperor Champion
-Accept any challenge no matter the odds

Terminator Assault Squad
x3 Lighting claws and 2x thunder hammers (I do switch this around at times to a 4:1 ratio)

Terminator Assault Squad
x3 Lighting claws and 2x thunder hammers (I do switch this around at times to a 4:1 ratio)

Army Tactics
Deployment
This army has always been simple to play. It is unforgiving in a lot of ways and gives you a good all-comers list if you can understand it’s weakness and know its strengths. I have two methods of deployment with the list. Usually it depends if I am going first or second. If I am going first I will deploy both my Land Raiders in the middle or on one side of the table to divide my opponent’s army. I run the Land Speeders behind the Land Raiders to provide protection till it’s time to hit key targets. The army has a problem as its sweet spot is in the range of 12 and 24 inches. Any army that has mobility can be pain in the butt for you to face and if they can stay 24 inches away there is a good chance they can win. You use the Land Raiders to cut off angles and the drop pods to box them in allowing your Terminators to come out and multiple assault bad guy units and just eat everything up with the reroll miss and reroll to wound lighting claws.

If I am going to go second I will usually reserve my whole army. Having the old edition of Drop pods combined with the reserving Land Raiders can limit the amount of damage my units can take and put them into key areas for counter assaults.

Unit Notes
The main hammer of the army is obvious the Terminators in the LRC which will have the Emperor’s Champion in it sometimes or the Marshall depending what armies I am playing. The problem I have with these is you have roughly 1000 points invested into these 4 units (Terminators and LRC) and if one of these units breaks down or gets destroyed you take out a big piece of the hammer and a big portion of the army’s hitting power. You have to be careful yet aggressive with these units which can be tough at times.

Emperor’s Champion is a great troop killer instead of a character killer. He has no longer become a Slayer of Champions so use him to the best you can and get him in the meat grinder.

Marshall is great for the LD:10 to the whole army as I always have units break and he limits that a lot. With a Thunder Hammer he can assault bigger units such as Monstrous Creatures and tanks and has a chance of breaking them with STR:9 on the charge.

Crusader squads are cheap units to land in key areas to hit tanks, slow units down, put pressure or lead groups into the hammer.

Land Speeders are just there for some cheap mobility anti-tank which Black Templars have always lacked. Since they have lacked anti tank, I have never bothered going through the old 4th edition of las plas squads which they can do. Because if you are going to use the las plas setup in a game, why not play normal space marines?