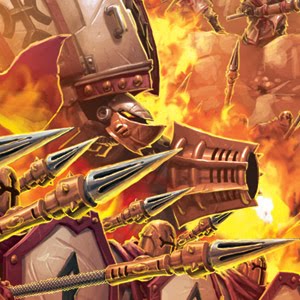 Hi guys.  I have something very cool today.  Privateer Press sent over this exclusive teaser pic just for you BoLS readers to check out.

The armies of the Lawbringer march to war! Here’s a sneak peak of just a small portion of the cover of the upcoming book:

Forces of WARMACHINE: Protectorate of Menoth!

Now we have no idea of the contents of this one, but is is slated for April.  The Khador and Cygnar Forces of WARMACHINES books each have a new Warcaster and unit of some type, so perhaps these two fellows fit the bill:

~It would appear that not only the Protectorate book, but plastic Light Warjacks are indeed headed to a battlefield near you.  What do you hoping to see in a Protectorate book, and what new stuff would you like to see coming down the pike for WARMACHINE?