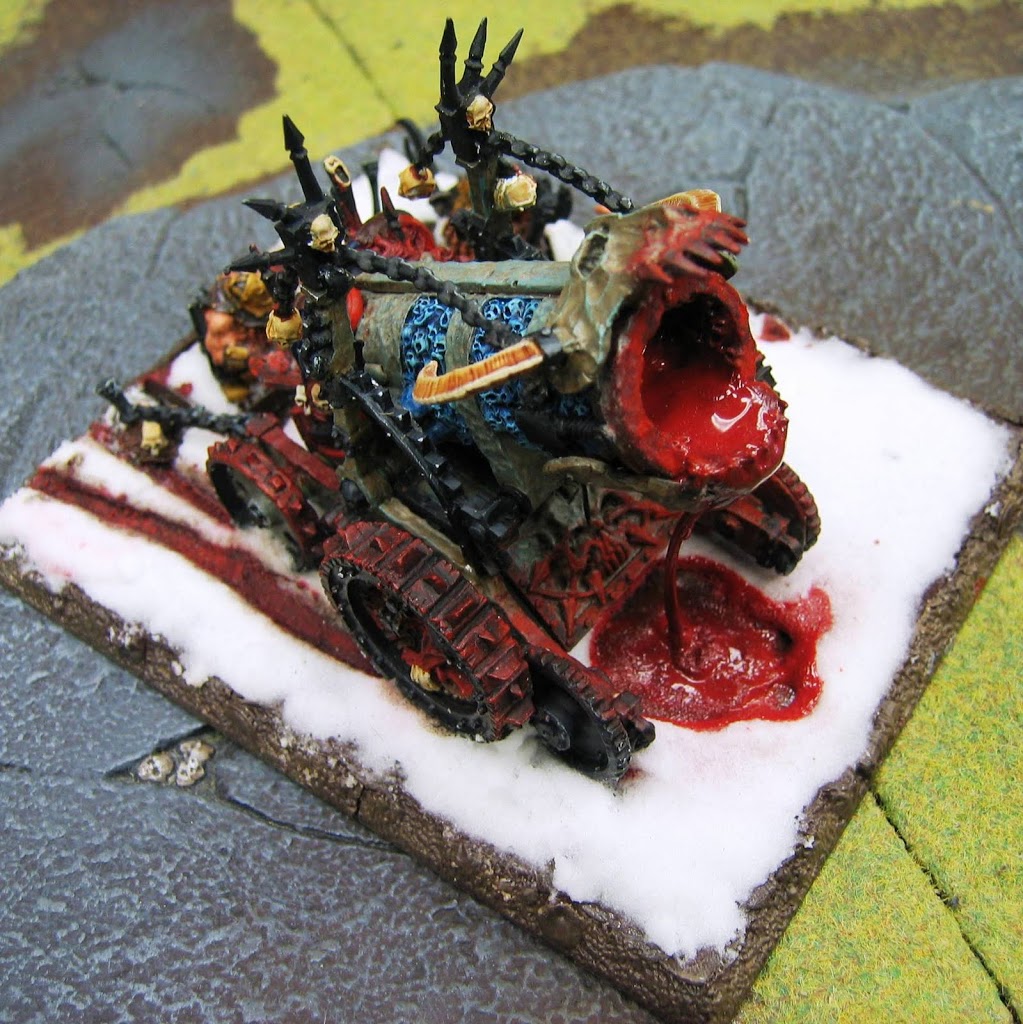 A friend of mine recently built and painted a Hellcannon and in the spirit of the recent “most gruesome” modeling contest at our local GW store he decided to make his Hellcannon as horrific as possible. Personally, I have to say I think he succeeded in making this model terribly gruesome to look at. The pictures here barely do it justice as in person the color and nature of the “blood” on this model is absolutely disgustingly realistic in color and overall appearance. The blood tracks in the snow are especially disturbing up close. The first time I saw this completed project I had a hard time looking at it! While photos don’t fully convey the impact of the color and detail as well as seeing this model in person, I thought some of you out there might enjoy a few photos of this hellish model and a bit of explanation from its builder on how he accomplished it.

From the builder and painter: “Having been modeling/painting for a whole six months I decided to tackle the Hellcannon and make it spectacularly gruesome. The current codex says, “Flesh runs like wax as the fire-daemon inside the cannon’s hearth feasts on body and bone.” How could something like that be shiny?

In any case, I got an idea in my head of blood spurting from the maw of the cannon, but realized I was in no way going to be able to pull that off. I then poured myself a cup of coffee and promptly spilled coffee as it clung to the lip of the carafe and realized the Hellcannon would probably have something like that happen immediately after spitting out its latest round of victims.

Before adding the blood, I first painted the Hellcannon, and much of it before assembly. I wanted the blood to stand out, so I picked a very cold stone color for the cannon’s body-work and the agonizing screams were first done with Mordian Blue, layered with Royal Blue and highlighted up through Ice Blue. Again, shiny seemed the antithesis of everything this model should be, so I did all the metal work in Chaos Black and then layered it up adding equal parts Ice Blue and Codex Gray to the mix and did a very broad highlight of a pure Codex Blue/Ice Blue mix on the chains with a very fine edge highlight with just Ice Blue on some of the sharper edges. As much as I wanted the Blood to stand out, I also wanted it to be in very stark contrast to the snow. To accommodate that, I kept the skulls very dark with a Bleached Bone base-coat, and Gryphonne Sepia wash and just a small amount of highlighting with Bleached Bone. The Snow was just your usual mix of Elmer’s glue and GF9 snow. First I covered the entire base with a very quick-setting epoxy resin, leaving slots for the dwarfs, base-coated it in Scorched Brown, drilled holes for the ties to hold down the cannon, then made two successive layers. I’d rather have a thinner, runnier mixture of glue in two layers than one super puffy layer in one. That is just my personal preference. After assembly I proceeded to mold the form of the pouring blood with green stuff and let it dry overnight. I then painted the parts that would be covered in blood (most of the front of the model, admittedly) with scab red, layering on some Blood red and washing it with Devlan Mud. I also hit the rims of the wheels and the back of the furnace. I left the doors off the furnace so the viewer can see the goriness inside. I also laid blood down in the tracks (made just by tamping down the snow with a small file) using the same procedure. I covered the last dwarf’s shovel with blood the same way. After all that I made a mixture of 3 parts Scab Red, 1 part Blood Red and 1 part Scorched Brown and added it to some GW water effects. I added it till I could just barely see through about 1 mm of the mixture while it was wet. After base-coating the bottom of the cannon’s maw and the green-stuff with scab red I used a pipette to pour the water effects into the maw. It eventually spilled over and followed the mold until it reached the base where it pooled.

The following morning I turned it in for my local store’s “Most Horrifying Model” contest. I was rushed at the end and plan on cleaning it up a little in the future, but for right now I am happy with the skills I have gained in the last six months and plan on completing it when I have the skills to do it true Justice.” Shortly after my friend’s Hellcannon model was finished I set about finishing up the planned “blood pool with bobbing skulls” on top of the Tower of Skulls I built last year. I finished just in time to enter my Tower of Skulls in the same contest as the Hellcannon shown above. The color I went for there was heavily influenced by the Hellcannon shown in the above article as I thought it was some of the best color for the purpose I’d ever seen on a model. I was especially impressed given the short time span my friend has been in the hobby and the short time he had to work on this project before the store contest. I hope you enjoyed seeing his gruesome creation too.