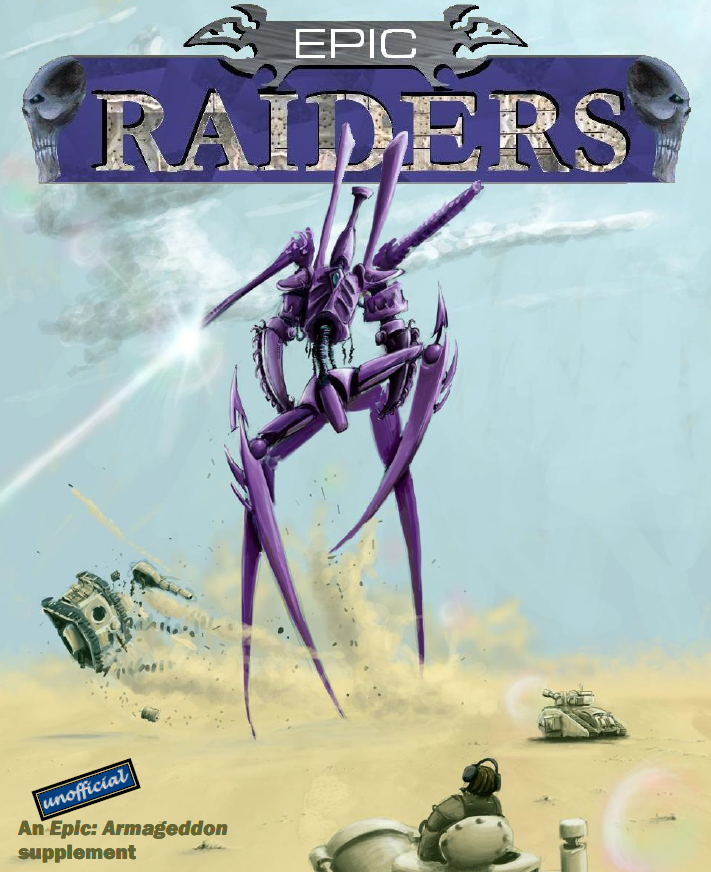 GR00V3R here,
Epic: Raiders is a free, fan-made unofficial supplement for Epic:Armageddon that introduces Dark Eldar and Necron armies. The supplement was created by a group of Epic fans in order to encourage expansion of the game, and the result is a very professional body of work used by Epic players worldwide.

Epic: Raiders works in conjunction with the official rulebooks released by Games Workshop, Epic: Armageddon and Epic: Swordwind, and describes an original story that takes place on Scarab, a mining world and way point for Imperial forces. The story involves the Minervan Armored Legion (Imperial Guard), the Necrons and the Dark Eldar, each pitted against the other.

The supplement includes army backgrounds, stats and lists, as well as several very engaging scenarios that can serve as a campaign for the world of Scarab—several Battle Fleet Gothic scenarios are even included, which is sure to make fans of that other excellent system happy. The book also includes an exhaustive modeling section aimed at helping would-be Necron and Dark Eldar player realize their dreams of playing with these forces using the Epic system, as these models are not currently available for sale from either Games Workshop or Forge World. The fiction and army lists correlate with the existing 40K universe, and yet provide for a full and fun Epic experience in its own right. The authors understand that fans of 40K and Epic alike are extremely particular and do not like seeing the Epic setting “polluted” in any way. In the developers’ own words, “mention of Dark Eldar war engines or Necron harvesting machines can make one fan wince in pain while another drools in anticipation”.

They were quick to recognize, however, that there are huge gaps of missing unit types that simply must be in existence in order for the 40K setting to have some cohesion. “The Necrons did not wage war against the Old Ones with Monoliths alone, and the existing fictional accounts are ripe with vague descriptions of horrifying machines and powerful weapons. Likewise, the Dark Eldar must have vehicles that fall somewhere between the frail Raiders and the massive Torture Class Cruisers for them to destroy entire regiments of Imperial forces.”

The authors created Epic: Raiders with the goal of having a Games Workshop-friendly document. “We fully support that players purchase their army units from Specialist Games and from Forgeworld whenever possible.” The Minervan list includes beautiful units that can be purchased from both of those sites, and the authors have included modeling sections to help the reader scratch-build or convert the Necron and Dark Eldar units that cannot be purchased from these sources. The production quality of the Epic: Raiders supplement’s 130-plus pages is superb, from the beautiful artwork to the model beauty-shots included with the stat boxes. The full book, which weighs in at around 20MB, can be downloaded for free. Epic: Raiders is a exceptional achievement, and one of the most impressive productions I have seen produced by a gaming community. I have also been told by the authors that the 2nd edition of the book is due for release in the not-too-distant future, which bodes well in terms of ongoing support for these armies. Whether you play Epic or not, I highly recommend you take a look at this awesome work by some very talented gamers.

~This is QUITE the amazing labor of love from the Epic playerbase. If you needed YET MORE evidence that the Epic-playing community is clamouring for support for an expanded 6mm model range…seriously, Necron, Dark Eldar and Tyranid ranges would be very nice, thank you.