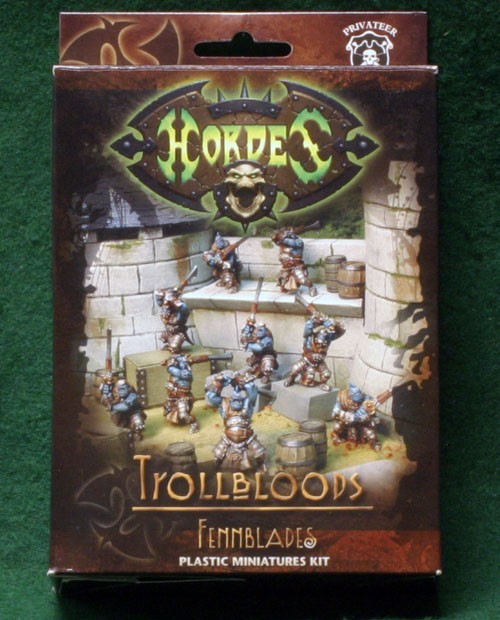 Not every Warmachine player was as excited as I was when Privateer Press announced that plastic minis would be on their way in soon and would become a regular part of their future product releases. The biggest bonus right off the bat was the anticipation of lower prices for these new models. While some of Privateer’s older minis, particularly the warjacks and warbeasts, are priced pretty reasonably, some of the more recent stuff has been a little harder on the wallet. I was also looking forward to the possibilities of poseability and conversions with this much easier to work with material. Having clipped my share of Games Workshop sprues, I also couldn’t help but wonder what if any cool little bits would come along with these new kits.
What follows is a quick overview of my first Privateer plastic kit to assemble and paint (more on the assembling and painting later). This may be old news to a lot of Warmachine players, but between the posts I still sometimes see on the Privateer forums asking about these plastics, and the potential curiosity of anyone who reads BoLS, but doesn’t play Privateer games, I decided I’d hammer out this quick article anyway. So here we have Privateer’s latest plastic releases: the Trollblood Fennblades.

Of course the first thing I noticed was that the price was right. $50 USD seemed like a good buy for 10 oversized trollkin wielding giant hooked double-handed swords. You get less mini for your money than you would from say, Games Workshop’s $35 space marine boxed set, but the Fennblades are about Terminator sized, and the armies are much smaller in Hordes/Warmachine, where a force with two or more full units of single wound infantry is considered a pretty numerous affair. Even if these guys keep their current MkII field test points cost of a meager 4/6 they’ll still constitute about an eighth of a standard force. And while some of Privateer’s metal infantry still comes in under $50 for a full unit, the other single wound Troll infantry choices run between $75 and $86. Turns out big metal figurines are expensive. As soon as you open the box you will realize you are in unfamiliar country. There are no sprues here. Instead, all the parts for each mini are sealed individually, bases and all, in 2 bags with 5 guys in each.

So while you miss out on the cool extra bits that come with the GW plastics, it is my opinion that the level of detail and the quality of the sculpts are every bit the equal of any other plastic miniature kits currently on the market. They are designed more with quick assembly in mind than with the potential of multiple poses. There are five different sculpts in all in the box and all the poses are very dynamic, with each trollkin having his own unique bit of character. Each model only has three pieces: the bodies, arms, and the back tartans so assembly time is minimal. There were some problems with heavy mold lines on some of the sculpts but the others were mostly clean. All the parts connect with pegs and the arms can actually hold to the body without the need for glue. The pegs are a little thick so I’d definitely recommend trimming them down a bit so they fit together more easily. There’s one very important thing you need to know before you start gluing these guys. Privateer Press doesn’t use polystyrene plastic for these guys. They’re made out of something else, and you can feel the extra weight of this different material when you pick them up. This means polystyrene, or “plastic” glue won’t work on them. You’ll need glue of the “super”, or cyanoacrylate variety. In all likelihood this rule will apply to future plastics as well, including the heavy ‘jack kits we’ll be seeing in late January. And here’s a shot of the guy with some of his fellow trolls. To the left is Borka Kegslayer, currently the largest trollkin model. And to the right is a kriel warrior, representing a “normal” sized Trollkin. Kriel warriors are about a head taller than a human, so as you can see this fella’s a big ‘un.

~Privateer’s ventures into the field of plastic miniatures have taken a unique approach compared to the Games Workshop sprue system, but I think this is a great kit. The only other thing I really could have asked for would have been interchangeable heads, although any reasonably experienced modeler can probably make some swaps of his own with a hobby knife and some Green Stuff. I’ve gone ahead and followed up this article by taking step by step pics of painting these guys, so if you think you could use some more painting insight, keep your eyes peeled for a future article.