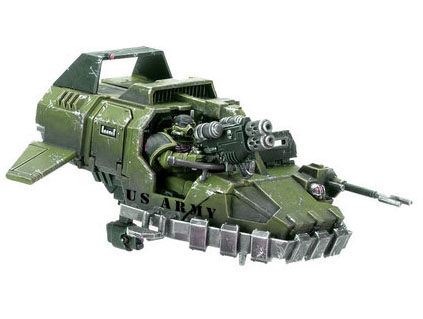 So you thought the real life bolter was cool?  Check out what the Army wants proposals for now (like in 2 weeks):

The “Transformer project,” launched by the Defense Advanced Research Projects Agency, would create a vehicle that can travel on land or through the air.

The vehicle would be able to fly like a helicopter, drive off-road and carry up to four people, according to DARPA’s Dec. 23 announcement. The ability to fly would help escape ambushes and land mines and cross rivers.

In DARPA’s terminology, flying and driving, “enables the warfighter to approach targets from directions opportune to them and not the enemy.”

The Transformer also must get good gas mileage, because it’s able to conduct “tactically relevant missions” on a single tank of fuel.

DARPA, the Pentagon office that oversees long-range research, is leaving up to private researchers and contractors to determine how a vehicle would do all that and what it would look like. Interested firms will meet with DARPA officials Jan. 14 in Arlington, Va.

~Even more here.  Now I swear if I see some news article about US Army Terminator Armor in the next couple of months I will *officially* start being wierded out. (Yes it is a slow news day)