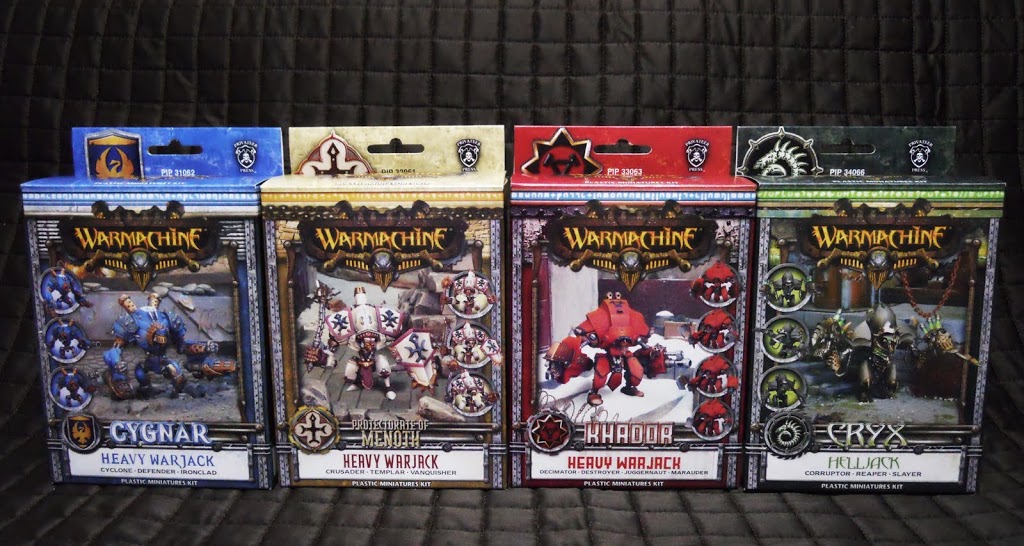 So who wants to take a detailed look at the new upcoming Warmachine Plastic Warjacks?

Hot off the heels of the Fennblade article, Privateer Press has graciously sent along preview copies of their latest endeavors in the field of plastic miniatures, and let me tell you ladies and gentlemen, these are the kits you’ve been waiting for. In these boxes you’ll find pretty much everything you could ask for in a plastic kit: poseable minis, the potential to build variant models, and the requisite extra bits left over. So if you tuned in for the Fennblade review, or have already purchased one of Privateer’s plastic kits, this method of packaging will be familiar to you. All the pieces are divided into different sections of a plastic bag, and tucked into a black tray with the cards in a notch in the bottom. For those of you unfamiliar with Warmachine, as of now each faction has two different chassis for their heavy ‘jacks which, augmented with different armaments, create the individual ‘jack types. These kits represent the Prime heavies: those released in Warmachine: Prime; the first Warmachine book. There is everything you need here to build new sculpts of those original heavy warjacks, along with the pieces to assemble each faction’s newest heavy. And speaking of which, here are those pieces.
CYGNAR: IRONCLAD, DEFENDER, CYCLONE So you’ll notice how all the ‘jack’s arms have ball and socket joints for maximum poseability. The legs fit in statically, but the fact that they’re plastic will make it that much easier to hack them up if you need to have… say… your Crusader crushing some heathen under its boot. You can magnetize all the arms if you like, to make 3/4 ‘jacks in one, but if you don’t, a little modelling could turn them into some useful wreck markers. And then theres all the obvious conversion potential. I personally have my eyes on the loose fists that come with the Cygnar kit. Not sure what I might do with them but there’s got to be some troll model out there that needs over-sized three-fingered gauntleted hands.

But what has really amazed me about these kits is the true 3-dimensionality of them. And since that must sound ridiculous allow me to explain. We all know how the molding process works right? The two halves of the mold come together like clam shells, the casting material gets poured down a channel, and when the material has cooled the two halves come apart. It means sculptors have to be careful when putting on certain details because if a part sticks out in the wrong way you’ll get what is sometimes referred to as undercutting. This is where a protruding detail has extra unwanted material that gets imparted into the mold during… well molding. Its something I see a lot on rivets, especially from older sculpts. Its not as big of a concern on metal molds as they are soft and peel away from the finished model, but you’ll still notice it a lot of the time. Its particularly evident with plastics, as the polystyrene injection method involves solid molds that have to come apart perfectly. If the molds aren’t done just right you’ll get areas that look stretched or seem to have reduced detail near the mold line. Avoiding this effect is one of the reasons why polystyrene plastic kits are so intensive to plan and involve so many pieces. Not that I mean to disparage the plastic kits of any other miniatures companies. If anything its amazing how hard it is to notice this effect on them most of the time. At any rate, somehow, whatever Privateer’s methods are with plastics, they’ve solved the undercutting problem in a way I wouldn’t have thought possible even with metal.

Heres the new Cygnar heavy Hull. Its one solid piece. There are rivets on it everywhere. Perfect little round rivets. And here’s the arm for the new Cryx Corruptor. Look at that metal texture on the inside of the thumb. And you can even see a little bit of the mold line running down the middle of the same digit. Not sure how they did that. This is the new Crusader Inferno Mace. And on this one they’re just showing off. When I saw the photo of the completed painted version of this kit on the Privateer website, I took it as an indicator of how many pieces would be involved with these plastic warjacks. I assumed this mace would have to come in at least 4 parts. Shaft, head with two blades already attached, and then two more blades to glue on to either side. But no. This is all one solid piece, and on it there are 4 blades, joined at the middle at 90 degree angles to one another, but yet at 45 degree angles to the fist. And if that wasn’t enough, each blade has two little sections cut out of it. I’m really still scratching my head over this one. I even looked it over to make sure no one had glued it together at the factory. Many years ago I tried my hand at casting, and let me tell you, this piece defies all logic.

~ So, all hyperbole aside, these new warjacks have completely surpassed my expectations. Privateer has really knocked these initial heavy warjack kits out of the park and they will be indespensible core purchases for players of the various factions. So get your paints and brushes ready, these big boys are headed to a store near you in just a couple of weeks. In the meantime, new kits means new painting and hobby articles so keep checking in to see what we do with these guys.