Whether Flames of War? An Introduction 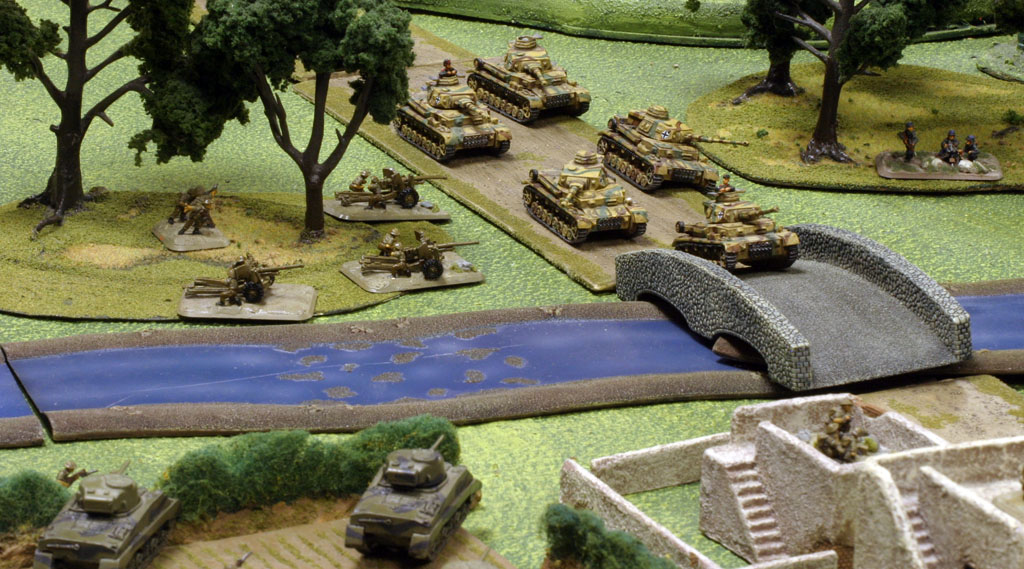 Hi guys, Bulwark here.  Lately I’ve been playing a lot of Flames of War, the WW2 miniatures game. It’s not one of those cliched die-hard, by the numbers, brass tacks, historical games that many venerable WW2 miniature games are; this one is actually enjoyable to play.

Battlefront has done a superb job of taking a classic mini game setting and produced a fun rule set to go with it. I’m not going to get too much into the game in this introduction article, but I will tell you several of the things that I enjoy about the game.

First and foremost is the look of the game. Because of the smaller 15mm scale (roughly half  the size of 40k/WFB/WM) and the generally greater amount of terrain, FoW tables look very nice. Rolling hills, large forests, streams, roads, deserts, you name it. For you old school readers out there, Flames of War is pretty much exactly half way in scale between 40k and Epic. The second thing I like is the game is the greater tactical flexibility of the system. There is the concept of a squad, but not all models need to stay with their squad. You can leave behind some of your squad to guard a choke point while the rest of the squad moves forward. You can also split your fire. Imagine being able to have your heavy weapons nail enemy armor while your small arms blaze away at enemy infantry; this is allowed in FoW. There are also a couple of game-play rules I would enjoy having in all my other wargames systems. Premeasuring is allowed at any time. You never have to risk moving your infantry out of cover to assault only to find they are out of reach. There is also something we call the ‘intend-to’ rule. If you position your tank behind a building with the intent that it is out of line of sight, you can tell your opponent that when you place it. If he agrees that it is out of sight, then it is, regardless of whether it is or not. This type of system solves a lot of arguments that are common other systems.

Another thing I like is that there are very few special rules in this game. Once you learn the few Nation specific special rules, you are set to go.

Battlefront also does a very good job of supporting their players. One of the ways they do this is by releasing army lists on their website. By using the lists from the website, you are able to play very obscure, but historically accurate, lists. For example, lets say you want to play the Brazilian 1st Infantry Division, they have a list for that. Want to play a Finnish armored company with looted Russian tanks? They have a list for that. How about Palestinian Jews fighting with the British, or a New Zealand light tank company in Tunisia , or Russian naval infantry? They have lists for all that and more. The Scottish even get a bagpiper in their companies! Polish, Estonians, Canadians, Czech, Indian, Greek, they are all in there.

~There are a lot more specifics of Flame of War that I could get into, but I think after this brief introduction I will just leave you with a few pretty pictures, talk to you more later: This town ain’t big enough for the two of us…