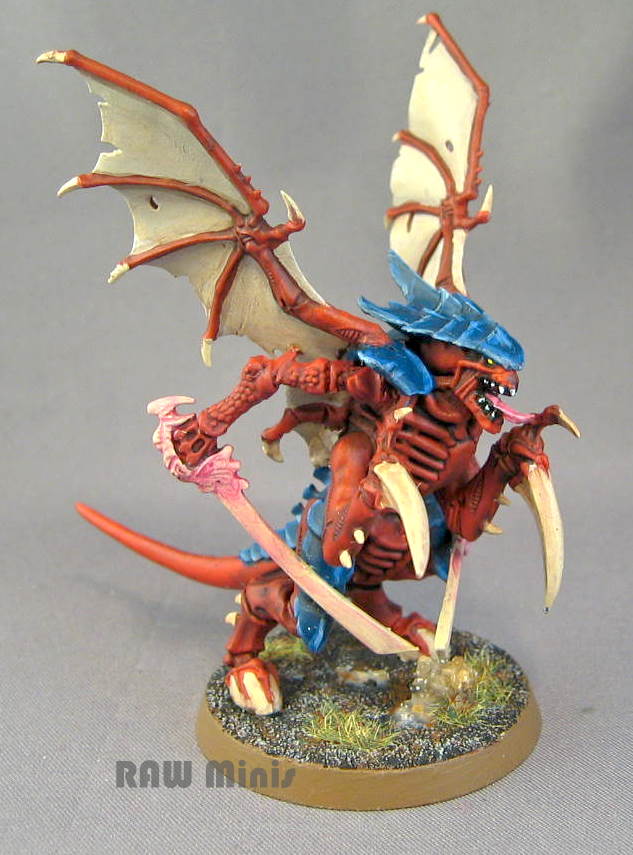 The new Codex Tyranids is loaded with cool new model types for which there are no model kits and among those creatures are winged Tyranid Warriors, the Shrikes. However, thanks to the new plastic Gargoyle kit building Shrikes is a relatively inexpensive and simple model conversion to perform. Here’s how I accomplished my own.

First, I trimmed the edges of the wings that are to be glued to the Warrior bodies with a modeling knife. Trim them ever so slightly so that they make as much contact with the body as possible. This means trimming them so that they follow the stepped nature of the dorsal carapace as much as you are able. If you wish to maximize the wingspan of the models, then adjust the wings to fit as far apart as possible. This is what I did.

Next, glue the wings to the Warrior bodies with plastic cement. After the cement is dry, blend the joins with some modeling putty. Kneadatite (“Green Stuff”) or Aves Apoxie Sculpt will do nicely. After the putty has the shape and smoothness you desire be sure to let it harden before working on the models any further. Be sure that the wings will not make it impossible to attach the arms or head later by checking the clearance of all parts before attaching the wings permanently.

After the wings and putty are firmly set on the model, finish attaching the arms and head. I did this after attaching the wings to ensure the arms and head did’t get in the way of the conversion work and so that I could make the pose of the arms and head feel natural with the pose of the wings. I wanted scything talons and boneswords on my Shrikes. The scything talons come from the Ravener plastic sprue and the bonesword arms were left over in my bits box from Advanced Space Crusade (1990) or Tyranid Attack (1992). Yes, I’ve been at the Warhammer hobby for just a little while.

Notice from the two pictures shown here above and below that there are differently angled wings on the Gargoyle sprue, so you can choose wings for different poses. That’s it, Shrikes relatively fast and easy without purchasing expensive upgrade parts. At just under $3 US per Gargoyle even when purchased at list price it’s fairly economical to cannibalize a few sets of wings from a Gargoyle box set to transform some of your Tyranid Warriors into Shrikes. Happy landings and thanks for flying the friendly skies of the Hive Mind.

For those interested in the color scheme shown above here are a few quick bits of info on the major elements. The red is Blood Red washed with Devlan Mud. The blue is Regal Blue shaded in the plate joins with Badab Black. Wing membranes are Dheneb Stone washed with very thin Gryphonne Sepia. Boneswords are Bleached Bone washed with thinned Warlock Purple, then wet blended on the blades with more Bleached Bone. Regal Blue is highlighted with Ultramarines Blue and then edged with a mix of Regal Blue and Skull White.