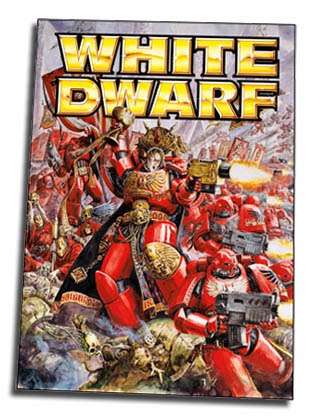 So the floodgates are open and the community is flipping through preview copies of the Blood Angel codex, and drooling over the minis. The initial rules rundown is here, and the painted minis are here.  So the question gang is what do we thing the design studio has dropped in our laps?  Here’s my first impressions:

1) Blood Angels are the “fast marines”, almost sitting astride the Space Marines and the Eldar codex in terms of overall mobility.

2) This army will be decisive, and favor the bold.  I can see many games effectively decided by the end of turn 2, with so many options to reach an enemy in force early game.

3) The army is a bit unstable with those random rolls for the unit special rules, but is a high rate of fire medium-short range killer (12″-24″).  It luckily has all the tools it needs to get in there with minimal effort.

4) Some of the rules are now bordering on the outlandish.  We are seeing the extreme other end of that long road that started with the “prim and proper, nothing fancy” design ethos started way back with Jervis’ Dark Angels codex.  Things like magna-grapples and deep striking Land Raiders represent almost comic-book concepts I would never ever have expected to see in an official Games Workshop codex.  Imagine the howling if someone had tried that in a home-brew codex.  It will be interesting to see if the Design Studio will pull back a bit from this design direction, or if we will see fever-pitched rules headed our way with upcoming projects like Dark Eldar.

5) Games Workshop has really captured the long-lived artisanship of the chapter.  The Ultras look Roman, the Wolves are Vikings, Templars are Monks, the Dark Angels are…misunderstood, but the Blood Angels have bling that goes to 11!

6) Finally, where is the Stormraven kit, and why is it not in the first wave?  I believe months after the fact, that a big part of the success of the IG was the innovative Valkyrie kit that kindled imaginations and brought new players into starting IG armies.  I can’t help but feel that the Stormraven could have captured that intoxicating magic all over again, but alas…

~The floor is yours Generals.  What’s your take on what the Blood Angels will being to the game and how you plan on using/dealing with them?