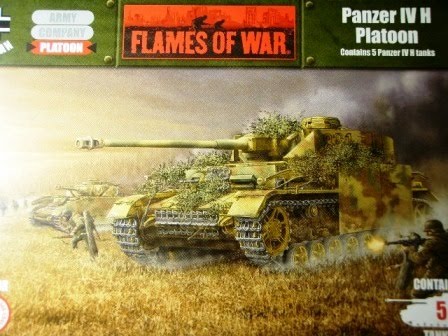 As part of our expanding Flames of War coverage here at BoLS, I thought I’d show you how to build a typical tank.  In this case, lets take a look at a box of German Panzer IV tanks.

These are great medium tanks that can be used in mid and late war and models a lot of German players will want to add to their army. The box comes with 5 tanks inside, the maximum size for a platoon.   In Mid-War armies, this one unit can compose 1/4 of your points, meaning that roughly $50 will give you a huge chunk of your army.  That’s a nice deal, and one reason tank companies are so popular.
The tanks themselves come mostly assembled already.  I’m mainly a U.S. player, and I’ve built a lot of Sherman tanks and Halftracks.  The model quality and assembly methods are pretty consistent across all the different nations, and most of what you see will apply no matter the force you play.
The chassis and turret are separate pieces and come just as you see here.  All you need build is the tracks, gun barrel, cupolas, a machine gun, and the track guards.  In fact, these tanks are some of the most complex to build of most any tanks in the range.  Sherman tanks have even fewer parts.  One nice feature that Battlefront has been adding to all of its vehicles is magnets for the turrets!  Lots of FoW players realized how handy it was to magnetize the turrets to the chassis, especially to keep them together during transport.  The side benefit is that when the tank is destroyed you can simply pop the turret off.  Instead of making players buy a bunch of rare earth magnets themselves, Battlefront includes enough for every tank in the box.  They even have a recessed area cast into the chassis to glue the magnet in, you’ll have to drill your own holes for the turret, though. Building the tanks up to this point took only ten or fifteen minutes.  Some of the barrels needed a little cleaning with a sharp knife, but otherwise there’s very little flash.  The tracks are labeled L and R so you’ll know which side to glue them on.  Little metal nubs on each side also ensure they go on in the right place.  Simple, and for most nations’ tanks you’d be done already.  One trick for you new players, use the closed cupolas except on the platoon leaders’ tank.  It’ll make him easy to tell apart from the rest of the unit at one easy glance.

Now for the one tricky part of these models.  The Schurzen side armor.  The German tanks had one defining feature that separates them out on the battlefield, and that is the Schurzen plates that protected the tracks.  Assembling this part of the model is the most challenging part of the tank. First of all, the schurzen for each side comes in six separate pieces, and requires quite a bit of finesse to assemble.  The triangular parts must be glued onto the sides first, while the plastic rail is glued to the armor.  Then the armor is glued onto the triangular sections.  I spent more time working on these than on all the rest of the models combined.  What many FoW players do simply out of convenience: glue the schurzen straight onto the side of the tank.  It’d like to say that I did the same thing solely to show you the difference, but the reality is that I manged to lose several of the triangular pieces during construction and I was forced down that route. The Panzer on the left is the “official” build, the one on the right is the shortcut method.  There is a small difference, but not much of one, especially for a 15mm scale model from 4 feet away. Primed white and ready for painting!
Aside from the Schurzen, these are great models.  They are easy to assemble, and they are probably the most difficult of any in the FoW range.  Even then, the shortcut method of attaching the Schurzen means even that minor annoyance is easily overcome.  Look for an upcoming article where I show you just how quick and easy it is to have a fully painted unit on the table.