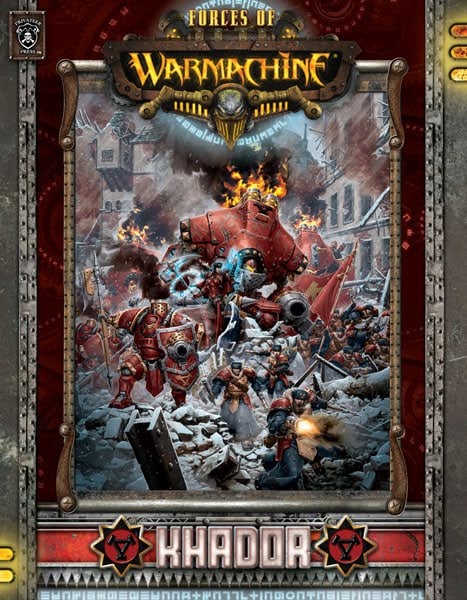 The Forces of Warmachine: Khador book arrived here at BoLS recently and this 144 page tome contains anything and everything a Khadoran player (or one of their rivals) could ever want to know about the icy Motherland.  Lets dive in. Each full color page is loaded with art, background, and fluff. Almost 90 pages of model entries give you all the rules a good Warmachine general needs to plan out their conquests while relaxing on the couch. Among these rules you will find information for all the Khador pieces released with previous books, plus the rules for all the 2010 releases which include a new warcaster, solo, two units, weapon attachment, and a unit attachment. The 20 page gallery section in the back includes a fantastic painting tutorial and gallery section devoted to the red swarthed Khadoran military. If you already own any Privateer Press Publications this should all come as no surprise, as they make a point of printing stunning books. The book contains the 12 new theme lists for the Khadoran Warcasters, including such gems as the Old Witch placing several forests on the board before deployment and Karchev granting Man-O-War units advance deployment to name just a couple. With that out of the way lets take a quick look at the new units. The book includes six new model entries. We will have a full tactical review of the new units soon but here are some quick notes to capture their abilities:
Kommander Strakhov: Khador Warcaster
His feat allows warjacks in his control area to charge and slam without focus, and grants +4 movement and pathfinder to friendlies in his control area as well. Some of his spells grant stealth and the ability to make full advance moves after destroying enemies.  With his affinity for Kommandos Strakhov is positioned to be the master of the sneaky special ops type of mission.

Widowmaker Marksman: Khador Solo
A solo with a bit of shoot and scoot ability can enhance both himself and nearby Widowmakers.

~ Hope you enjoyed this preview of the latest Forces of Warmachine book. It hits store shelves on Wednesday March 10th so go head down to your LGS and check it out. Make sure to be back in a month when we should have the info on the upcoming Protectorate book!