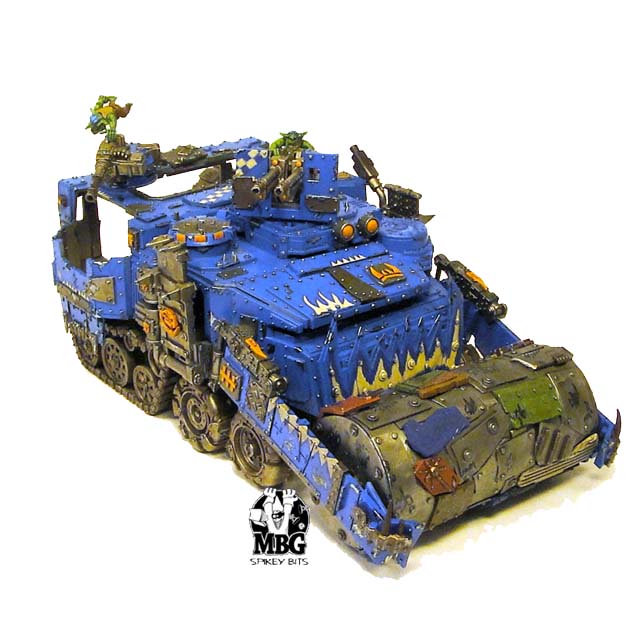 When the Ork Battlewagon kit came out I knew I had to have a few. I opened the box up and furiously started assembling it.   When I was done I have to admit I was a little let down, it was barely bigger than a Trukk.

While it’s a well made kit, with lots of options, I just didn’t like the size. You may remember back in the day everyone converted these things up from Land Raiders and Leman Russes etc. The next day I walked into work at TheWarStore, and my friend Mr. Don had done something extraordinary, he had made his Battlewagon bigger by combining two kits! There was much rejoicing, and I went home with two more kits and started anew. This time it took a little longer because you have to saw the two vehicles in half and then assemble them down the middle. The hatch over the driver compartment and the rear armored top, require even more work and dry-fitting to get right.  But when the main body is together it looks great!

You can see in some of the shots above how we made this conversion.  I eventually made a custom front gob out of plastic card cause the front plates tend to look a little janky when combined side by side.

Before I had the time to paint these guys, my friend Pete Burke put the idea in my head to make a custom Deff Rolla just out of various bits cobbled together. I kinda looked confused for a minute until he handed me a cylindrical plastic shelf leg, and then it was off to the bits box I ended up using a combination of plastic card, plastic rivits, and various armor plates from different 40k kits to make the two Deff Rollas. I magnetized them so I could actually store these monstrosities, and give them a little more support structure wise. Then I went to work giving the Battlewagons a little character.  I love having grots running around up to no good on my vehicles.  On one wagon I made a chain-gun big shoota from some defiler bits, and added a cheerful gunner. His buddy is in the back on another big shoota, but he forgot to strap in… The other Battlewagon has a gunner team, one to point and one to light the Kannon.  If I was the Boss I don’t know if I would trust them to get it right….. Here is a shot of the whole model. It breaks down nice and easy. I usually store the turrets in the cabin area, and take apart the Rollas for foam stowage separately. So here are my two finished Super Battlewagons, what do you think??

Author: Robert B
Robert is a veteran tabletop and miniatures gamer, and writer with over 20 years of experience. His specialtiesies are the worlds of Game's Workshop's Warhammer. He began writing for BoLS In 2010.
Advertisement
Conversions Orks Warhammer 40k
Advertisement 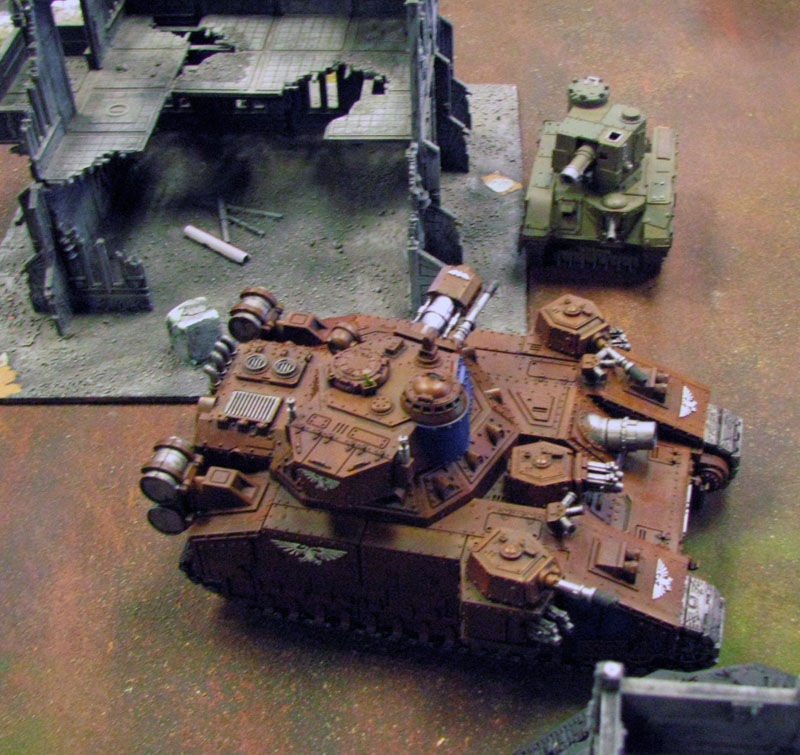