Warmachine Tactica: The Butcher of Khardov 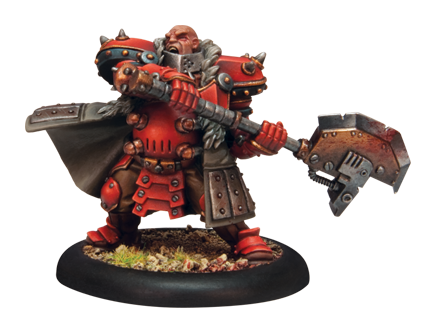 Hi guys, after 2 months straight of nothing but games with the Butcher I felt I would write up a small review based on my experiences!

Its well known that the Butcher is a beat stick. With a Mat of 9 and a P+S 16 axe that has Weaponmaster on it he is trashing almost everything in melee. Keeping this in mind it is very easy to get carried away taking axe to face to notice you’ve over extended him. I find that he really shines when used as a 2nd line caster throwing out his awesome buffs to his army and smashing anything that presents itself.

The Butcher supports a very nice set of stats that will keep your opponent wary of stray assassination attempts on him. It’s usually all or nothing when they are going for him and they know it. Use that to your advantage. As stated before he’s hefting Lola (a P+S 16 Weapon master, Reach, Magical weapon) with a Mat 9. Couple with 6 Focus he can tear apart anything he really wants to die (more on this later.) It’s also important to remember that he does have a Blunderbuss for the rare shot at some infantry. Don’t forget he does cause terror, rare but great when someone charges him and fails it standing there in front of him dumbfounded for a turn.

The Butcher’s feat is well known and rightly feared. I feel it is fairly straight forward but can be used in both a proactive manner or a reactive manner. I feel like his feat has really helped me personally to correct mistakes I have made while playing. For example if you don’t get the charge off it will help mitigate that, and let your 2nd line tear through their units engaging your first rank like tissue paper, thus leaving your front rank to charge the enemy. Obviously using it in a proactive manner is best as most of your units will be charging with 4 dice.. mmmm 5 Dice if they are a weapons master. Look out for those charging Manhunter’s! The Butcher himself will get 5 dice with Lola, which while spectacular I find is rarely used for more than one swing. The turn I’m using his feat I find that its more important I have full throttle up or fury (or both!) more on that later.

Ahhh good `ol fury. I find this spell to be fantastics on Jacks and infantry alike. It has a short range so remember to cast it early on what you want and to upkeep it. Our jacks make a great target for this simply because they are all def 10 already, the ding to def is negligible. With full throttle up this can turn an already power house jack into a one man wrecking crew. Don’t forget you CAN bounce this spell around if our close enough. Upkeeping it, then casting it on another unit after the said unit has activated and gained the benefit from fury.

One of my favorite support spells with the Butcher. It’s important to note this cannot be cast on Warjacks. I use this spell two fold. It will make some of your infantry extremely difficult to deal with. I find myself casting this on Ironfangs almost without thought. Shield walled with Ironflesh they become Def 16 Arm 18, extremely tough infantry. Remember when you have Ironflesh up that unit CANNOT charge so make sure you’ve activated them done their charging (mini feat if applicable) before putting Ironflesh up. It is also an upkeep spell if you don’t mind the ding to speed. Another important note here is that the Butcher himself is a great target for Ironflesh when the time arises. Sometimes you have those games where you are just out ranged by the enemy caster and simply cannot get the charge off on him without him getting a crack at you first. This is where I find Iron Flesh on the Butcher to be most useful. With a Wardog, full Focus, and Iron Flesh up the Butcher becomes a monster of a man sporting a Def of 19 and an arm of 21. Often the enemy caster will make his run and miss enough to let the Butcher do what he does best. If things are getting hairy Iron Flesh up and start swinging!

It’s no secret after looking at this spell that the Butcher loves Jacks.
this spell works particularly well with jacks such as the Kodiak which get all its attacks boosted including its chain attack. Also note the synergy between the Juggernaut and other ice axe wielding beasts 🙂 Given the extra die that crit stationary becomes more likely. Its important to note that this spell DOES benefit the Butcher himself (Mat 9 +3d6? Yes please!). This spell also helps jacks deal with infantry as they can trample for free and are rolling 3d6 to crush them. An all around great spell. A final note: don’t feel like you have to cast this every round just to get your jacks moving as it requires the Butcher to activate. Allocating focus works just as well when 3 jacks need to run 🙂

A pretty powerful AOE spell with a pretty hefty Focus price. I rarely cast it but remember you have it for dealing with infantry or the occasional ranged caster kill if you can’t get to melee. Boosted P+S 15 is nothing to sneeze at.

At first the Butcher seems like a one man wrecking crew, the ultimate Khadorian axe to face caster. While he [I]can[I] do this (and do this very well) I find that buffing your army and letting them take the axe to face works far better. I would call the Butcher a fantastic support caster that’s not afraid to get his hands dirty when the situation presents itself.

~ I plan on adding more articles similar to these as I get more experience under my belt with other casters. Keep an eye out for them! For more armachine goodness check out my blog First Rank, Second Rank.