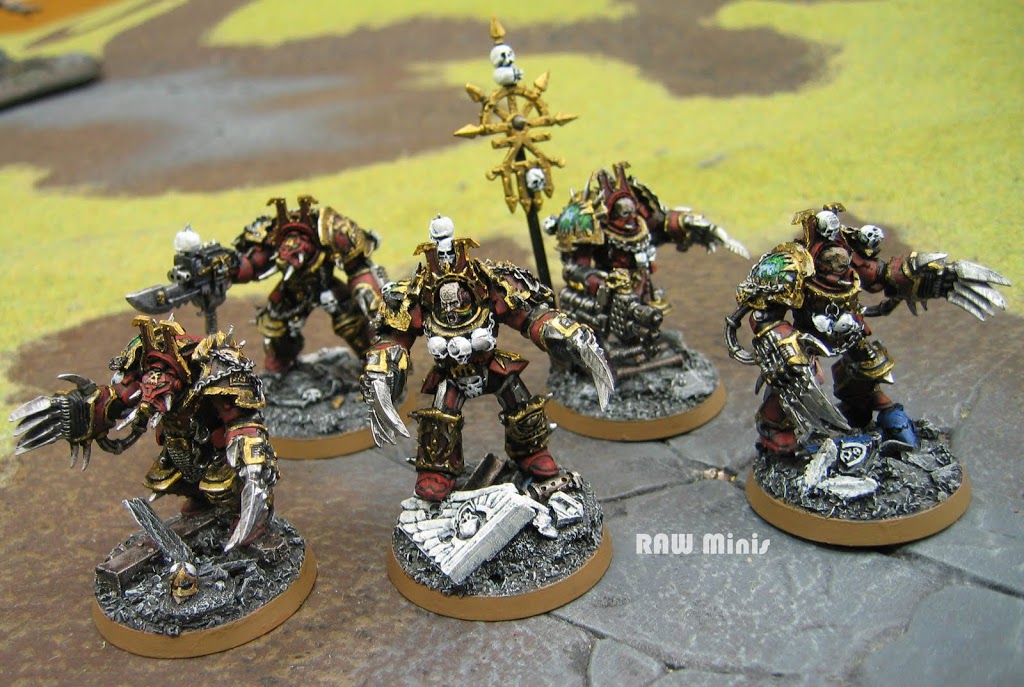 This is a simple hobby article about what I’ve been up to lately – the Ruinous Powers.

I’ve spent a lot of time updating my aged Eldar and Tyranids, adding armor to my Imperial Guard and creating my own Codex Space Marine chapter during the past year, but Chaos is my first Warahmmer love since my first trip to a GW store and I have managed to squeeze in a few Chaos Space Marine projects amidst all the other hobby projects the past several months. Years ago I began my own Chaos Legion and since I like to collect all things Chaos there are some large contingents of various cult troops of the major Chaos powers within the army going all the way back to the lead miniatures produced during the 40K Rogue Trader days. Of course, I continue to add the latest and greatest Chaos products to my army as they are released by Games Workshop and occasionally by Forge World as well. For those of you especially interested in the Chaos Terminator Forge World upgrades, the squad of five Khorne Terminators shown above was built using one set of the Khorne Terminator Conversion Set.

Most of the parts used on the models shown here that do not come from the Forge World conversion set come from the plastic Chaos Terminators set. The scenic basing was created from various bits including a few precious bits from the Cities of Death Urban Basing kit, some Imperial City bits, plastic rod and tubing,and slate basing material. The icon comes from the Chaos Space Marine Icon Sprue.

For nearly twenty years I wanted to create my own custom Codex Space Marines chapter. Last year I finally began working on that project. For those of you interested in a tiny peek at my Spears of Ares Space Marines, a few of the models for that army can be seen by visiting this link. The Venerable Dreadnought conversion for this army was also featured on the Games Workshop website in their March 22, 2010 “What’s New Today”.