This article is intended to help new players build effective army lists in 40K, over the course of a 4 part series.  This is the inaugural piece.  Lets forge ahead.

Each codex has a multitude of options in it and I often see new players simply taking units seemingly at random and are disappointed when they underperform. Please note that this article will often reference army strategy as in this game strategy predominantly takes place during list building. Tactics, the actual unit by unit decisions you make in game, will not be covered. After the theory is presented, we will examine actual lists and talk to the gamers that play them to gain their insights as to what makes them work. Lastly, as player skill is not a quantifiable, it will not be considered for the sake of this article.

Every army in the game has one basic function: to win games. Even a themed, fluff list still has one purpose on the table top and that is to defeat the other player (perhaps not ruthlessly), unless of course the fluff of your army is to lose. The game is played for fun of course, but it is not fun to be destroyed with no chance of victory because of list building errors.

So, any army, even an army that is not designed for tournament play, should still be able to win games with a reasonable degree of consistency or it will not be enjoyable to play or play against. In order to do this a player must first understand the basic principles of list building in order to construct an effective list.

The first and most important question you should ask yourself with any list is: how will it win the game (please note, this does not mean how can I be a WAAC player, or a jerk, only how will this list effectively achieve victory conditions in a given mission)? To answer this question you must look at the conditions for victory. In 5th edition standard missions you win 2/3’s of games by scoring more objectives than your opponent and 1/3 of games by destroying more of his units than he destroys of yours.

With that basic knowledge in place you can now begin to determine which units you will take to achieve these ends. Each army in the game is significantly different from the others but when boiled down to their most basic elements each army has three types of units in the context of 5th edition basic missions: scoring units, damage dealing units, and support units.

These types of units can appear in different force organization slots, and often times a unit may be a hybrid of the two or even all three, but these are essentially the roles all of the units available to you will fill.

Scoring Units have the following priorities in order of greatest to least importance:

Note: There is a sub category of the damage dealing unit that also fulfills the same basic function but is different enough to warrant note. This is the super unit, or Deathstar unit as it is sometimes called. These units primary function is to destroy enemy units but they are powerful and hard enough to kill that they require special attention or they can theoretically win games on their own if not dealt with. Their downside is that typically they are very expensive and neutralizing or destroying them often means you will win the game. Examples of this are Nob Bikers, full Thunder Hammer Assault Terminator squads, Swarmlord with full Tyrant Guard, etc.

Support Units have the following priorities:

You can then place each unit in your codex into one of these categories and its function on the table top will become clear. In order to achieve victory, you must choose units that best fulfill the requirements for their unit type. In a fluff oriented list or non optimized list you may have self imposed restrictions against taking the most efficient unit which is fine, but you must still try to achieve these objectives with your units or you will have very serious weaknesses in your list.

The next step to designing an effective army is to decide what your overall strategy is going to be. This is important because an army with a controlling strategy means that all of its units work in concert with one another and create synergy, as opposed to a collection of random units that operate independently, do not support one another and are easily destroyed. Again, there are a multitude of different types of builds, but in general what you have are the following:

Assault list. Whether through close combat or close range firepower, the army advances with the majority of its units to engage the opponent at close range.
Shooty list. This army destroys enemies at range and tends not to advance if possible, only doing so late game if necessary.
Hybrid list. This army can shoot and assault well, or contains a mix of both types of units. This army can advance if needs be, or sit back and shoot.
No matter which type of list you take you need to be able to do a number of things if you want to be able to take on all comers with your list.

Score objectives
Stop your opponent from scoring objectives
Destroy hordes of infantry
Destroy monstrous creatures and heavy tanks
Destroy large numbers of transport vehicles
If you can do all of the five things listed above, your army will be able to go toe to toe with any other and have at least a reasonable chance of achieving victory. The rest of this article will be focused on doing just this.

A Note on Redundancy and Efficiency

Before we dig into the nuts and bolts of unit selection, this is a concept that is important to understand. Redundancy is sometimes referred to as spamming, which has negative connotations. In reality, unit redundancy is hugely beneficial for a number of reasons. If you have multiples of a critical unit, the loss of one won’t devastate your force. For example, if you are facing an army heavy with Armor value 14 vehicles and you have only one unit capable of destroying them at range, the loss of that unit puts you at a tremendous disadvantage. Having two of these units makes them twice as destructive and twice as resilient, therefore you increase your effectiveness four fold. Redundancy also means that you can achieve what is called critical mass. If you have more of a certain unit type than your enemy has tools to destroy that unit, then you will achieve your goals without giving him the ability to stop you. For example, if you take an all infantry list, and your opponent has only a limited number of effective anti infantry units, he will be unable to destroy your units before your units destroy his ability to hurt them. Another example is taking more AV14 vehicles than your enemy has anti heavy tank weapons. He cannot possibly destroy them all in one turn thereby ensuring you have the ability to take away his ability to hurt you. You never want to have a situation in which a single unit is the lynch pin for your list strategy if you can avoid it. By having multiples of key units you ensure that your army will function even if it takes damage.

Counter to this is the concept of efficiency. Frequently new players will take too many upgrades available to a unit, bloating their points cost. More often than not, it is better to have more units than to spend points making units marginally better. Design units to fulfill a function in your army and then spend only enough points on them to achieve that end. For example, in a foot Eldar list it is usually better to have four units of Dire Avengers with no upgrades than to take three squads with an Exarch and Bladestorm. Why? Because four units means more bodies, another scoring unit, and they put out eighty shots a turn as opposed to the ninety every other turn that three units with Bladestorm put out.

Look for more next week, and I look forward to hearing your thoughts on the series so far and your philosophy on list building.

Author: Larry Vela
Dad, Gamer, Publisher, Pilot, Texan. All games all the time since junior-high. I started BoLS Interactive in 2006. I’m a lifelong tabletop & RPG gaming enthusiast, and internet publisher working to entertain and inform my readers every day. I've been playing RPGs and Tabletop Games since the 1970s. I'm been playing and covering Warhammer and Warhammer 40K for over 35 years.
Advertisement
Tactics Warhammer 40k
Advertisement 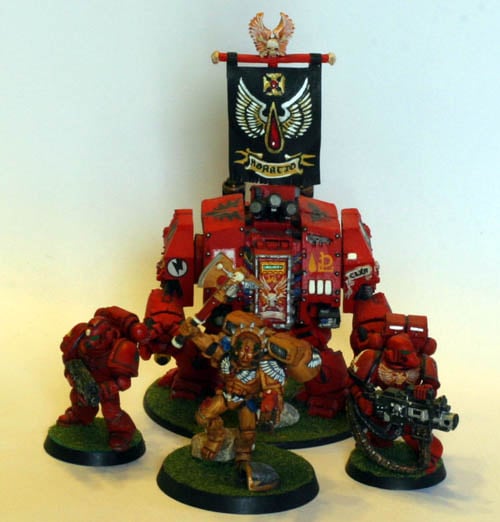