Tactica: The Butcher of Khardov pt. 2 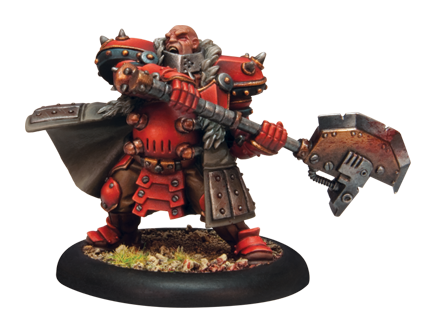 Col_Festus here! So I wrote an overview of the Butcher earlier. I wanted to complete the review with some synergy with `jacks and unit/solos.

I find the Butcher can run two ways when it comes to jacks. Either jack heavy, or running a self sustaining jack with something a bit more focus hungry. I usually run him the latter with a Kodiak and a Behemoth. The Behemoths sub cortex gets all the focus to pick out annoying support solo or infantry that are clogging my path. Then when its business time full throttle goes up and in he goes with some extra attacks. Anywho,
here are some neat combos with a few jacks.

Berserkers/Drago – I personally don’t run Berserkers but the Butcher loves them. You can take a whole slew of them and simply put up Full Throttle when the time to charge comes. This can achieve a very jack
heavy force for relatively cheap. When the do get to combat, or are swamped by an infantry unit simply allocate them a few focus, do some chopping and hope they explode taking everything with them. Juggernaut – The Juggernaut works very well with the Butcher. When you have Full Throttle up and 1 or 2 focus on them you can almost guarantee a critical stationary result. Fury is also extremely gross on them. P+S
21 +4d6 with 3d6 to hit on the charge? Yes please.

Beast 09 – The Big Daddy. He is a big of a focus hog so if you plan on taking him make sure you have other self sufficient Jacks to back him up (Kodiaks, Berserkers). If you have the focus to spare the simple combos this Beast can unleash with the Butcher are discusting. For example : Cast FT, and Fury, he charges and Threshes. Any jacks he hits have a good chance of going stationary and taking a P+S 21 hit. If he is attacking living targets such as warbeasts he can use 4 dice. Infantry? Forget about it.. they will be mowed down like a fat man in a straw hat riding a John Deer over them. Oh did I mention he has reach and a way to move faster? Yes please!

Behemoth – If Beast 09 is the big daddy this guys his father. He also works extremely well under the Butcher if you are taking focus efficient jacks to back him up. I personally use him over Beast 09 as he brings some accurate AOE’s to my army which I feel are great for popping those pesky solos and support elements that my Cygnar and Menoth enemies bring all the time. You can also cast Fury on him before you charge if you want something really dead… against a typical arm 18 jack you are halving their armor to 9, rolling 3d6 to hit with a P+S 15 + 4d6. Kerboom. For anyone who likes a little Math Machine that’s an average of 16 damage with one charge attack.. Youch… Pop the Butcher’s feat for icing on a redonk cake. Kodiak – This little guy is very welcome and is almost an auto include in any Butcher list I make. The big draw here, he has a chain attack that benefits from Full Throttle, and he has Pathfinder. Two very very useful things in the Butchers Battle Group. He is what I consider a “Focus Efficient” jack and requires almost no focus when under Full Throttle. Use him to charge through difficult terrain/wreck markers to hit that enemy jack and throw him to the mercy of the Behemoth, or Beast 09…. Don’t forget steam when you are near some high def infantry. Spriggan/Devastator – Two great jacks, but somewhat focus hungry. The utility the spriggan brings can be great and Bulldoze is an amazing ability. If you are gonna use them I suggest pairing them with something more focus efficient so you can get the most mileage out of them.
Units/Solos

Kayazy Assassins – Great infantry to run with the Butcher. Take them with the Underboss put Iron Flesh on them and run them into the enemy. They are Def 19 in melee at this point. Whatever’s left can pop their mini feat and go after the enemy caster. If the situation presents itself slap fury on them and watch them do what they do best, assassinate.

Ironfang Pikemen – Another staple in my Army. If you take them feel free to take a UA its well worth the mini feat they get. These guys can be used two ways under the Butcher. Keep em just out in front of your jacks with Ironflesh and Shield wall up. Advance at Def 16 arm 18 and watch your opponent cry. Once in range give them fury and charge something… anything, it will die.

Winter Guard – If you are going Winterguard with the Butcher buy them all the fixings. Give them Joe, UA, 3 Rocketeers and unleash the Grey Tide against your enemy. With their UA and Iron Flesh they are Def 17 to ranged attacks then for that little extra Joe makes them tough and fearless.. mmmmm. When they are close enough to charge you can give them Fury and the Bears strength from Joe resulting in P+S 14 Winterguard charging the enemy with combined melee attacks. Watch those ants take down elephants! A very very versatile infantry unit. Great to take with almost any caster, the Butcher just makes them even better. Manhunters/Yuri – Great for counter charges. Use AD to deploy them in your line somewhere good after the enemy has placed. With fury these guys can take down light jacks/warcaster no problem. Yuri gives you some anti infantry potential which is never a bad thing. Oh and Yuri in the woods with ironflesh on makes him def 21, in HTH Def 19… Swing and a miss! Wardog – Oh my lovely Dog. He is another auto include for me. He gives the Butcher an effective Def 16 in melee, with IF 19. Ever see the Butcher standing toe to toe with some things? Well with a Wardog, Iron Flesh and 4 focus hes def 19, Arm 22. Groovy.

M-o-W units – I personally find MOW extremely difficult to use. I usually leave them at home. One key thing to note about them is they are also on medium bases so they can screen for the Butcher.

Fenris/Doom Reavers – Great infantry/solos. They don’t benefit from any caster in particular simply because they have spell ward. I felt like I should mention them since fluff wise they are good `ol pals with the Butcher.

Advertisement
~ So there you have it! Thus completes my rundown on the Butcher of Khardov. I hope you took something away from the articles! Keep an eye out for more Warmachine stuff over the next few weeks! As always feel free to shoot me an email at [email protected]! Check out my blog First Rank, Second Rank for more Warmachine goodness!

Warmachine MKII: Thoughts One Month In