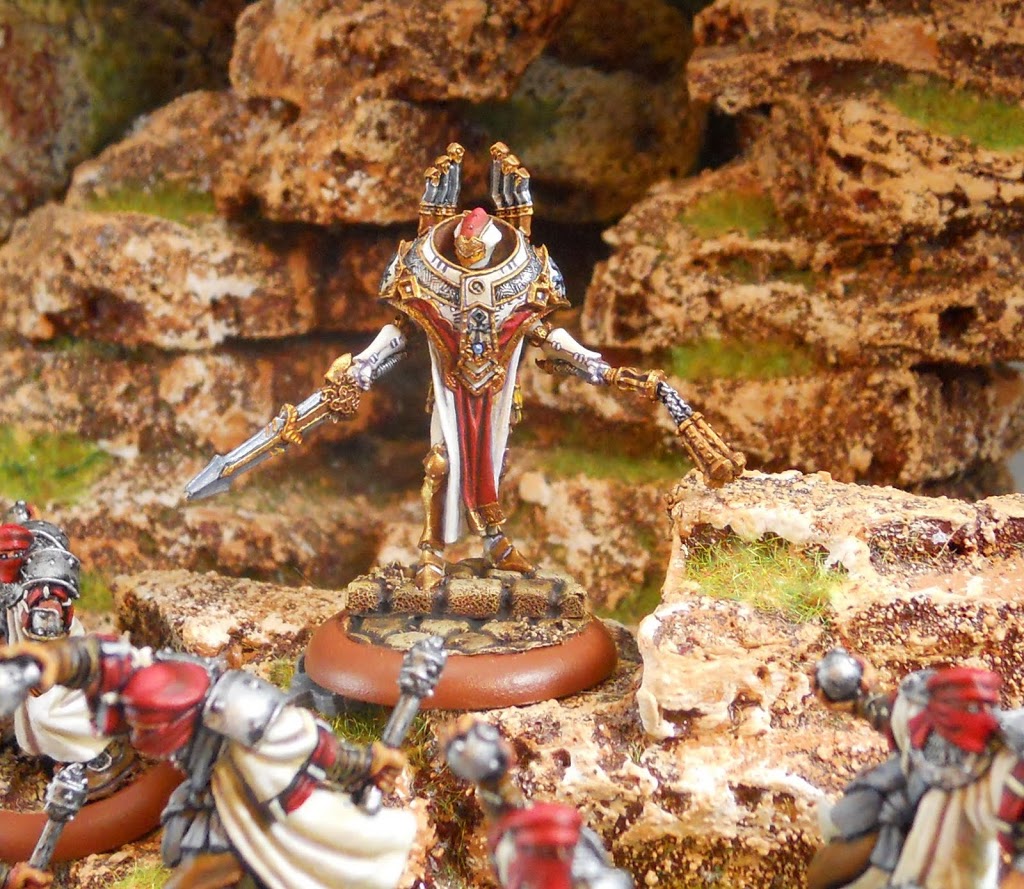 Gentleben here to give you my post battle review of the Protectorate of Menoth’s newest Warcaster. Lets get started:

As a Scrutator, Vindictus embodies everything dark and evil about the Protectorate of Menoth. It is the task of he and his fellow inquisitor-priests to root out heresy and unrest wherever it may lurk. To this end they are obligated under law to use whatever means necessary to ensure the safety of the Protectorate and torture is often considered the most optimum tool at their disposal. Their subjects predictably view these powerful individuals with equal amounts of fear and respect. While he no doubt enjoys the rank and opportunities afforded his station as a Scrutator, Vindictus is still foremost a priest. When he is not confronting the enemies of the Protectorate he still takes the time to minister to the faithless, converting them with honeyed words or burning iron.

It is no surprise then that a man of his talents is represented in-game with spells and rules that emphasize a troop heavy army. While he may not have a shiny rifle like Kara Sloan, or the ability to sling jacks across the field like Kommander Strakhov, Vindictus still has some powerful weapons in his arsenal. I am confident that when used by the right player the Vice Scrutator will prove to be a force to be reckoned with. He boasts a respectable statline both offensively and defensively, though none of his stats are particularly spectacular. The Sacrificial Pawn ability can make him more difficult to kill as it allows him to assign ranged attacks that hit him to nearby Holy Zealots. But don’t forget that it won’t protect you from incoming magic or melee attacks. And since Holy Zealots tend to die rather quickly, Vindictus can use the Death Toll ability to add a new zealot to any existing unit for every enemy warrior model he destroys with a melee attack. While its always handy to have extra troops join you on the battle mid-game, its never worth the loss of your warcaster. Exercise extreme caution when using this ability. Lets continue our examination with a look at his spells.

True Path is his signature spell granting an additional 2″ of movement to all warrior models in his control. While it does exclude warjacks, the bonus of a flat movement buff like this cannot be more profound. Its easy to look at the Harbinger’s similar spell Crusader’s Call and assume its superior as it affects ‘jacks as well. But there’s a utility to True Path that Crusader’s Call, which requires models to charge, lacks. True Path allows Temple Flameguard to maintain shield Wall and still move 8″. It gives greater mobility to units denied their orders or the ability to charge. It also allows Holy Zealots, which will no doubt play an important role in Vindictus’ armies, the ability to move up to 8″ and still throw their bombs. Finally the battlefield takes on a completely different feel when all warrior models have the ability to ignore all difficult terrain. The first time you use Vindictus, before you begin the game, stop and try to visualize your table with all forests, ruins, and other hindrances removed from your advancing troops. Then deploy your army with this new mindset.

Defender’s Ward is easily one of the best upkeep spells in the game. Granting an additional 2 points to both defense and armor can turn a mediocre unit into a force to be reckoned with or make an already tough unit into something an opponent may have to devote his entire army to deal with. You can also put it on Vindictus himself to help increase his odds for survival should you want to get him close to use death toll.

Rift is also a pretty amazing spell. Not only is it a pow 13, 4″ AoE , if your enemy doesn’t come with any pathfinder abilities the rough terrain this spell leaves can be a major hindrance to your opponent. Especially in scenarios where it might keep them away from control zones. Were this spell not in his arsenal, I would never consider taking an arc node with Vindictus. Just don’t think you can go putting it anywhere. As an offensive spell it will require a target, and you may not end up getting to put it exactly where you want to.

Sacrificial Lamb will go along way to getting some extra mileage out of what ‘jacks you do end up taking in a Vindictus force. With this spell, for sacrificing a friendly model you may place a focus on every jack in his control area. It can be a great deal but since the spell does cost a focus to cast I want at least 3 jacks around to justify the sacrifice. This has led me to want to bring Dervishes in a Vindictus army as their low points cost still gives me plenty of troops.

Immolation is the least interesting spell Vindictus brings, but a low focus pow 12 magic attack is always handy if there are incorporeal foes around.

Vindictus’ feat, Penitence, will inflict a single point of damage on any enemy model that damages one or more friendly models in Vindictus’ control area. This obviously means a great deal more against an infantry heavy force as a warjack will care little about taking a single point of damage. While it may not be the strongest feat in the game, Penitence can really come into its own in scenario games. If you can get your infantry into a control zone early on, you will have a turn in which any enemy attempting to uproot it can suffer some serious consequences. It also offers a strong counter to Cygnaran and Retribution ranged heavy armies, as any Long Gunners or Houseguard Riflemen will either have to leave your army alone for a turn or die.

This is the 35 pt. Vindictus force I came up with for my first game:

When under the influence of Battle Hymn the dervishes can hit hard, especially with Combo Strike. Or they can use their high Mat score combined with the Side-Step ability to reliably clear as many as five infantry per turn. The reason for the Zealots is obvious, but in addition to being targets for Sacrificial Pawn I’ve found they can cause a great deal of damage. I think the reason I like them so much is that they function a lot like a melee unit, but since they make a ranged attack rather than performing a charge they can maneuver in ways that melee infantry can’t. This will be even more true in a Vindictus force when they will be getting an extra 2″ of speed. The Temple Flameguard are inexpensive and with Defender’s Ward and Set Defense they can be incredibly difficult to clear out of a control zone. The two Exemplar units offer a hard hitting second wave that can easily take down even heavy ‘jacks. The Reclaimer is an obvious choice with so much infantry around to give him soul tokens. Finally the choir will probably end up being the most likely target for Sacrificial Lamb in addition to running their usual duties.

Finally here are some pics from my first battle with Vindictus. Some of you should recognize Nick’s Retribution army. I won’t recap the whole thing but there were a few key moments I can point out where I think Vindictus’ unique abilities ended up leading me to victory. You’ll have to excuse the quality of some of the close-ups which were cropped from much larger pics. Turn 1 close and the Zealots were able to move 8″ and still be able to throw a few bombs and take down Eiryss on a lucky roll. She was standing just outside the ruins where she thought she was safe due to the lack of long range weapons in my army. Turn 2. Clearly the Battle Mages are in danger, but with one of those Dervishes needed off camera to aid my collapsed left flank, Nick feels confident that the covering fire template will be enough to keep his mages alive and contest the objective. But the Dervish uses Side Step to kill more mages than Nick thought possible. Then the pathfinder advantage and extra speed granted by True Path lets the Flameguard charge through the woods, and at a far enough angle to the left to finish off the surviving mages giving me my second victory point. At the start of turn 4 both my Dervishes are still standing. Nick wasn’t wiling to sacrifice the Dawnguard who would have died trying to destroy the one in the center. He knows the Dervish can use sidestep to make a few attacks against his Phoenix, which is contesting an objective, but the warjack has had Polarity Shield cast on it, and it looks like none of the Knights Exemplar will be able to reach it without charging. With the other Dervish outside Vindictus’ control area the Phoenix should be able to survive long enough for him to mop up the rest of my army and get him the victory points he needs to win. With True Path the Exemplars don’t need to charge and are free to walk 7″ to the Phoenix and engage it. They won’t get a charge bonus but that’s two hits I wouldn’t get to make otherwise. I try to get Nick to take free strikes on the other exemplars by disengaging them. He kills one and then realizes I’m just trying to get them to hit harder with Bond of Brotherhood, so he lets the other 2 disengage unheeded. The knights do just enough damage to finish off the phoenix after the two dervishes have already had their way with it. With most casters the Dervishes would have been swinging at P+S 13 strikes being way up on the battlefield and far from the choir. But True Path had given the choir the extra 2″ of speed to put Hymn of Battle on the warjacks, despite their distance. The extra 2 damage on five separate attacks totalled 10 points to the Phoenix, without which the jack would still have been alive. As it is though the jack’s destruction gives me the third victory point I need for the scenario win. And for those of you wondering, Nick was using Rahn and did manage to level a lot of my infantry using Chain Blast.

~ I had a lot of fun with Vindictus my first game out, but I know I’ve still got a lot to learn about him. While his feat can be very situational I strongly believe his spells alone can win you some games. No warcaster is perfect all the time, but thats why Steam Roller format tournaments allow you to bring two lists, and Vindictus will completely shut down the right opponent. So if you have a Protectorate army he’s definitely worth giving a try, and if you don’t, underestimate him at your peril.

Author: Ben Williams
Ben Willimans is a Professional Painter and Columnist at Bell of Lost Souls. He has been involved in the hobby and art side of miniatures and the tabletop gaming industry for over 20 years. He has won multiple national painting awards.
Advertisement
Menoth Tactics Warmachine-Hordes
Advertisement 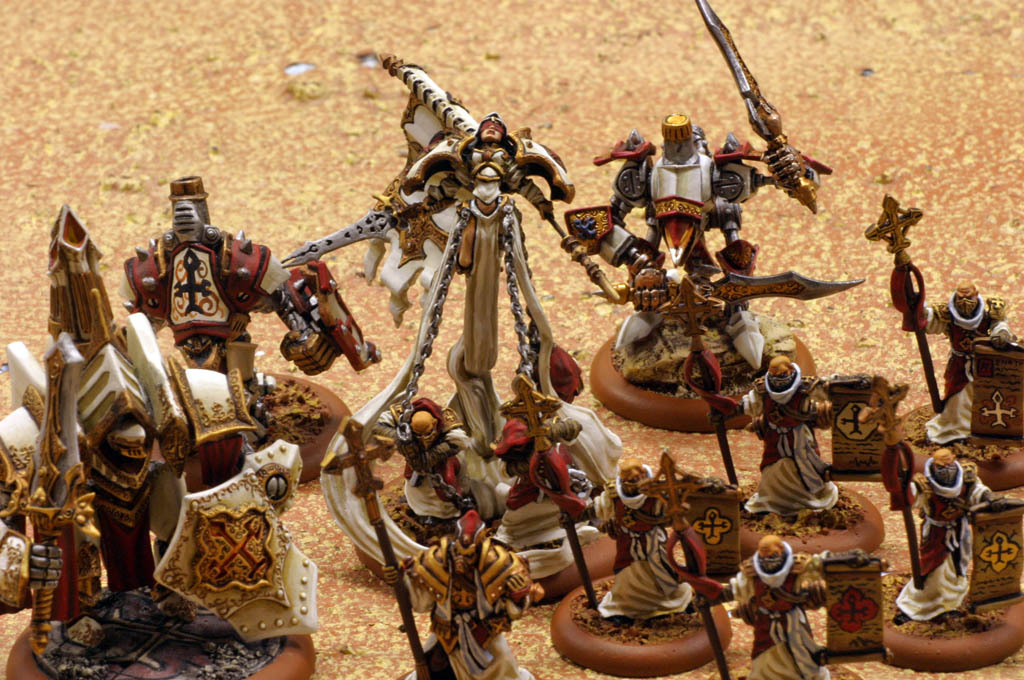