19th Hole
Outer Rim
For the 19th hole this week I have a simple Space Marine list at 1850 points. It’s a army list that gives you enough options for scoring missions, kill points and even attack and defend missions. In my eyes it’s also more forgiving for newer players all the way up to more of the competitive players.

Like before the list doesn’t rely on any gimmicks but options to complete certain task across the board. The list will be able to hold its own against other top tier list but even with mechanized Imperial Guard it’s going to be a slugfest.
Outer Rim 1850 list
Space Marine Librarian
Terminators armor, Epistolary, Storm shield
Powers: Gate and Null zone
Terminator assault Squad
5 thunderhammers
Land Raider Crusader: Extra Armor
Dreadnought: Multi-Melta, heavy flamer
Drop pod
Dreadnought: Multi-Melta, heavy flamer
Drop pod: locator beacon
Tactical Squad
10 man Melta gun, missile launcher, Combi-Melta and Powerfist
In Rhino
Tactical Squad
10 man Melta gun, missile launcher, Combi-Melta and Powerfist
In Rhino
Scout squad 5 man
Combat blades, Powerfist
Land Speeder Storm
Heavy flamer
Land Speeder
Multi Melta
Land Speeder
Multi-Melta, heavy flamer
Thunder Fire Cannon
Tactics
The basic idea is to run with your hammer/spear out in front which would be your thunderhammer terminators in the LRC flanked by two Rhino squads. Depending on who you are playing and mission objectives I would almost combat squad these every time so you are able to bring your missile launchers to bear on transports and alike. If you are playing mechanized IG you have to run these guys up as fast as you can, pop smoke and then hope next turn you can make it there to hit the lines. Behind the LRC I would hide the Land speeders so they would be able to come out from behind the Land Raider second turn and hit targets on the flanks or key targets that you want to either destroy or buy yourself time to get into the lines. examples are such things as going after Medusa, Leman Russ, Company Command squads with three or four plasma guns and Vindicators, whatever has a high AP 2 weapon or high strength value that can be dished out in high volume.

The Drop pods force your opponent to either reserve everything which allows you to buy time on getting closer to them, or deploy and risk his high value units and “fortified” positions. If you’re going against IG and they want to deploy everything on, first drop on the flank and have the pods be supported by the Land speeder storm squad. You buy yourself more time and either they have to deal with the force on the flank or the hammer unit coming straight for them.

The key with this list at least in my mind is forcing your opponent to make decisions he doesn’t want to make puts him in positions to make mistakes and capitalize on them. The Thunder fire cannon is just there to slow down units, root out people in cover or deal with horde size units.

Now, you’re not allways going to go first and depending on your opponent it might be a good thing. If your opponent doesn’t have a lot of shooting and only has two to four units that can even shoot at your army , then I would take the risk deploy everything and still follow above. Otherwise if they have 5+ units that could drop your line in the first turn its better to reserve off the board. If you can deploy certain units out of LOS do so with your Rhinos and Thunderfire Cannons. I would let your Storm flank and whichever side it comes in on won’t matter much with it having the ability to move 24 inches on arrival. Most likely you can move on 12 and assault a unit on either flank with the Storm and scouts. They are best used to go after key mechanized units in the back field though.

Have the Drop pods drop down to a flank with a locator beacon and get ready for the second turn deep strike with land speeders and your other drop pod. When the Land Raider comes in just push it down the middle and have the Rhinos join them to put added pressure on your opponents force. It’s going to come down to how well you can do in turn thee and four to see how you will win the game though.

That is this week’s list, now remember you can tweak and change it if you want for a softer game and there are things you can do to make it harder but its your choice at the end to use it… Otherwise I’d love to hear your thoughts on its design as well as you own tweaks and advice. If you have any special requests (next week will be a Xenos race) for next week’s lists, let’s hear them or you can message me on the BoLS Forum. Darkwynn out! 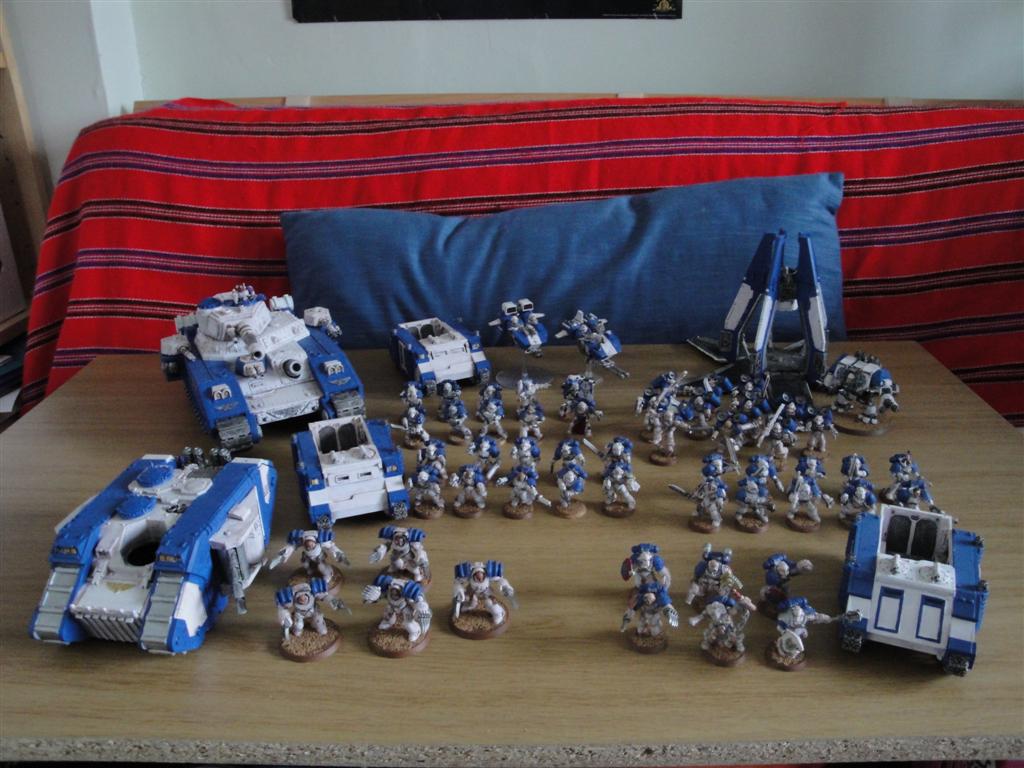