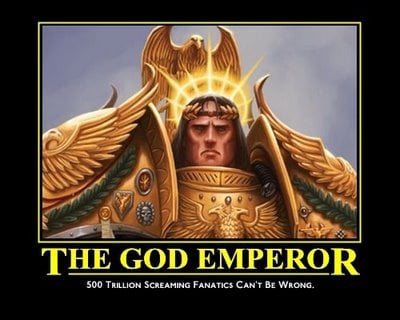 In the grim darkness of the far future we all know who the big guy in charge is, but what do we really know about him?

Despite being arguably the most single most important figure in the 40k universe, very little information has ever been given to us about the Immortal Emperor of Mankind. Because of his importance, and the mystery surrounding him, I will approach this topic slowly and in manageable pieces. As his origins in particular are shrouded in mystery, and it seems an appropriate place to begin, let us start here. Most of what we have ever been told about him dates from some of the very earliest incarnations of the 40k universe, and given how much has changed since then some of this is difficult to reconcile with our current understanding of 40k history.

For those of us who haven’t journeyed into the dark and terrible corners of the internet where ancient, out of print wargaming fluff dwells to this day, here is a brief overview of what we were once told about the origins of the God Emperor. In the ancient prehistoric past of Terra, humanity was guided by a group of psykers known as Shamans. These Shamans where humans gifted with prescient abilities through the Warp, and were able to use these gifts to shepherd the tribes of ancient man, protecting them from the worst of potential disasters and setting them on the dimly glimpsed path to what would eventually lead to human civilization. Along with this clairvoyance the Shamans had one other great gift; immortality. Though a shaman was essentially human, and lived and could die like any other human, this was not the end for them. When they died their consciousness and essence drifted in the serene Warp until it was reborn into a new body, with all of their knowledge, memory, and abilities intact.

For countless centuries of prehistory this continued, the reborn Shamans guided their race of fellow vulnerable hairless primates, destined in time to become the dominant species on the planet and perhaps the entire galaxy, through a world full of perils. Who can say how many times a devastating plague that might have ravaged the small human population was avoided or contained due to the shrewd council of a Shaman? Or how often a single promising individual (perhaps an early uniter of tribes, the inventor of agriculture or the first smelting of metal) was saved from some basic accident of life in these harsh times because a Shaman acted on his/her unique knowledge? Yet as time progressed a disturbing trend emerged, fewer and fewer Shaman were being reborn after their deaths. The Warp was becoming more turbulent than ever and incorporeal predators prowled this realm in greater numbers than ever. The remaining Shamans foresaw a time when none of their number would be reborn, and their fledgling race would surely perish or stagnate without guidance. The remaining Shamans set upon a desperate plan and those few thousand who remained gathered together in one location and took their own lives in the same instant. Upon their deaths their souls did not drift and await rebirth, but instead they merged together to create something… else. A new entity was born, far greater even than the potent sum of its parts, a being that would in time be known as The Emperor.

This being was far too mighty to be swept aside by eddies of the warp, or consumed by some paltry predator of the immaterium. And when it was born into the world, in the ancient Anatolian peninsula, its physical form was no less potent, an exemplar in both mind and body of all the potential that humanity might one day in the vastly distant future aspire to be. The Emperor set about the task that he had set for himself and guided humanity through the millennia in secret, a hidden hand that steered and shaped human destiny, until finally, during the depths of Old Night, the Age of Strife, he deemed that the time had finally come to reveal himself in full to his charges. If ever he had a name of his own, then it was now forever lost, from this point onward he would always be The Emperor of Mankind.

All of this is well and good, but in some ways it is difficult to reconcile with what we now understand about the universe of 40k, in large part because when it was written this universe was a much smaller place. The account is one limited to earth, and makes no allowance for the vast prehistory of 40k that we now understand, or the events of the rest of the galaxy at the time. And yet, some fragments of information that have surfaced in the recent literature seem to lend credence to this version of events. For one thing, one of the few things we now know for certain about the Emperor’s origins is that, as told to his favored son Horus, he was born in Anatolia. Furthermore, he spoke to Magnus of ancient now vanished human Shamans who could tap into and read the ley lines of Warp power that flowed through Terra.

If however, this is to be the true version of events, then can it be reconciled with what we now know of the history of the 40k universe. However, once we take a step back and look at this version again, we see that armed with our current information about the 40k universe, perhaps it isn’t so incongruous after all. For instance, the Shamans might well have been a sort of self guidance mechanism that the Old Ones built into their unfinished project (humanity) which continued to fulfill their role even long after they were no longer being supervised, eventually becoming something far greater than they were ever intended. Perhaps they are analogous to the Ethereal Caste among the Tau, another unfinished project of the Old Ones. Another important point regards the relative initial serenity of the Warp during the early years of the Shamans as opposed to the increased turbulence that spelled their doom. This was originally credited entirely to humanity’s influence, but would seem to run contrary to what we know of the warp, and of the Old One/C’tan War in Heaven that “spawned” the first three Chaos Gods. However, it is entirely possible that, with galactic civilization (indeed, life itself) recovering from near annihilation during the first Red Harvest and Enslaver Plague nearly 70 million years ago, the Warp was in fact relatively calm. It is also important that the rise of human civilization must have coincided with the eons long decline of the vast galaxy spanning Eldar empire, and the increasing unrest of the Warp were the echos of this, culminating in the birth of Slaanesh, collapse of the Eldar empire, and beginning of the Age of Strife.

Clearly much about the Emperor has yet to be revealed, and when/if it is we may well have to once again reevaluate what we know of him. But for now we can still examine some of the early material, and find that it is perhaps not as outdated and incompatible as it might have appeared.

What are your thoughts on the origins of the Emperor? Have any of you read vastly different stories? Do you think this old material can still fly, or should it join other unfortunates like the Squats in the waste heap of GW cast-offs?If you have a favorite corner of the 40k lore that would like to see featured, or just a lore question you think would interest the community, let me know, you can even PM me on the forum if you like. New ideas are always welcome. 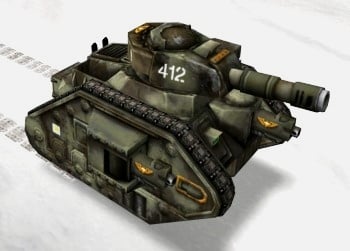