An Interview with Wyatt Traina

Reecius (Reece Robbins) here with some more interviews with our fellow wargamers.  I was able to catch them for some 40K talk and get their input into what makes them such effective tournament players and what aspects of the hobby they enjoy best.

All three of these gamers are well rounded hobbyists who are very skilled players, painters and all around nice guys. In upcoming interviews, we will be speaking with some of the better known painters and modelers of the 40K community to get another take on the hobby.  First up today is Wyatt Traina.

Reece: Thanks for taking the time to share your knowledge with the community, Wyatt.
Wyatt: Not a problem. I always like talking about 40k.

Reece: How long have you been playing 40K and what armies do you currently play?
Wyatt: I started playing 40k when I was in junior high school, so it’s been about 12 years or so. I started with the 3rd ed boxed set. You know, the one that comes with space marines and the losing army. I have managed to collect a slew of armies since then. I now have Black Templars, Orks, Tyranids, Sisters of Battle, Necrons, and a small Red Corsairs army. I have some rights to a Space Wolves army as well. My Adepticon team tournament team members and I are pretty generous with playing each other’s army.

Reece: Do you play competitively and if so what is your favorite tournament army these days?
Wyatt: I would say I play pretty competitively. I have been doing pretty well these days with Space Wolves. It’s a really strong list. I think the most fun I have is with my Sisters of Battle.

Reece: What made you choose Sisters?
Wyatt: All metal models. Kidding. I like playing Sisters because I went to Da Boyz GT this past year, and out of something like 70 players, I was the only Witch Hunter. Immediate street cred. Also, Sisters are a fun army because they have special rules like imperial guard orders that function outside of the normal 40k rule set. This means that they are really a finesse army. Sure they have power armor, but T3 and no AV above 11 (except Exorcists) means they are still pretty fragile.

Reece: What was your overall strategy when building this army?
Wyatt: Since I have been playing them for a long time, I would probably build the army differently. I’m also a far better player than a list builder. If I was to do it all over again, I would make sure to pay more attention to the squads’ roles and the acts of faith they can be called upon to perform. This is a key for a solid Sisters army. Having 4 flamers in a smaller Dominion squad is a bad idea on account of their ability to perform Divine Guidance. Furthermore there are some list building decisions that were made which proved to be much more/less effective than I expected them to be. For example, I had 2 Canonesses in the list, and one was on foot riding in a Rhino/Repressor, and the other was solo flying around with an Eviscerator. The one on foot frequently got rocked early on because it was hard to use acts of faith on her since she was with a squad. An over performing unit has been a 10 girl sister squad with a Veteran with eviscerator and a book. These girls are cheap and I can’t count the times they have won a game for me.

Reece: What do you feel are its strengths, and what armies do you hope to draw in a tournament setting?
Wyatt: Like all Sisters armies, the strength is medium range firefights. As a result I do pretty well against assault armies. Chaos is a good army to draw, as are Space Marine armies. I have the flamers to stomp Orks usually, and Daemons are also a pretty easy game.

Reece: What do you feel are its weaknesses and what armies do you hope to avoid in a tournament setting?
Wyatt: The army really has no strong assault troops. Even Straken Guard is better at assaults than I am. This makes some games a lot harder than they should be. Necrons is actually a hard match up for me. I have no answer to a Monolith, and I can’t assault and sweep Warrior units. Luckily no one plays Necrons. Mech IG is a problem, but they give almost everyone problems. I also had a really hard time against Greg Sparks’ Footdar. Units which are resistant to small arms fire, like fortuned Wraithguard, are a real headache. Plague Marines are another unit I typically have a hard time with.

Reece: Roughly, what would you say your win/loss/draw record is with your Sisters?
Wyatt: I win more than I lose, but as the ghetto boys say “real gansta ass ****** don’t flex nuts, cuz real gangsta ass ****** know they got’s em”

Reece: Would you mind sharing some of your gaming accomplishment?
Wyatt: Sure. Best Hybrid Army Adepticon ’09. 8th place Gladiator Adepticon ’10. 3rd place team Adepticon ’10, and Best Team Sportsman. Best Overall Boston Brawl ’10. Best Sportsman Da Boyz GT ’09. Gold sci-fi single mini Boston Brawl ’10. Those are the big ones. I got some for beating people, some for painting, and some for being a good sport which is important to me.

Reece: You got to play BoLS’ Darkwynn on the top table for all the marbles at the Adepticon Gladiator, how did that game go?
Wyatt: He gave me a sound beating. I had some bad luck early game, and I got discouraged and foolishly started forgetting things. I didn’t think to move a rhino on my far right flank around turn 3 or 4 which set me back. Rookie mistake really. Near the end of the game, Nick was sweating a little, but it was too little too late. I would relish a rematch. I would like to see how he would do if my land raiders weren’t destroyed turn 1.

Reece: You were selected to represent team America at the European Team Championships, that must be really exciting.
Wyatt: Yeah it is exciting. It’s also daunting, because I honestly think that we have the best players in the world, and I don’t want to sell us short.

Reece: Who else is on the team and how have you guys been preparing for this international show down?
Wyatt: The team is: Ben Mohlie, John Wilmington, Greg Sparks, Nick Rose, Shaun Kemp, Paul Migliano, Mike Mutscheller, and I. To prepare we have a grueling regimen involving consumption of raw eggs and running up the stairs of American monuments, and several training montages. Also, we have a private forum set up for us, and a website is pending.

Reece: Since each team member must have a different army, what will you be playing?
Wyatt: Orks probably. If any Ork pros out there want to help me out and give me some secret Ork advice for the list I use, I would be happy to hear from you. Do it secretly, we already caught a foreign spy trying to create an account on our forums.

Reece: Have you been to Europe before? It is a great place, and definitely worth exploring. Will you be able to get out and see some of it while you are there?
Wyatt: I lived in England for a year and already got my Eurotripping out of the way. I also am already taking time off from Dental School to go, so I really will be going just for the tournament, and then coming back. Victorious.

Reece: If you had one piece of advice for a new player in regards to either list building or tactics, what would it be?
Wyatt: Play against people who are better than you. Ben (Mohlie) is an excellent player and I would be nowhere near as good as I am now if I didn’t play against him frequently. It’s gotten to the point now that I give as good as I get. But I also learned a bunch playing against Greg Sparks at the DA BOYZ GT.

Reece: Thanks for taking the time to answer my questions. Good luck at the ETC, all of us back home will be rooting for you guys! This should be quite the event; even Australia is sending a team this year.
Wyatt: Honestly the Australians should just save their money and stick to what it is they are good at. Which is giving birth to Flight of the Concords and letting people film J.R.R. Tolkien adaptations on their land. Also, Shameless plug, I am selling Team America T shirts. If you don’t buy one, the terrorists win. If anyone wants one, let me know. You bought one, and can testify that it looks pretty BA. (I do own one of the shirts and I must say they are pretty awesome.

Reece: I hope at a tournament in the not too distant future I find you across the table form me as we have not had the pleasure of getting a game in as of yet.
Wyatt: Yeah, I hear you reckon you are a veteran now. We will test that at some point. Hi everybody.  this is the first in a series of interviews with veteran wargamers, and I would like to thank both Reece Robbins for putting it together, and Wyatt Traina for volunteering his time and list for the piece.  have at it guys.

Author: Larry Vela
Dad, Gamer, Publisher, Pilot, Texan. All games all the time since junior-high. I started BoLS Interactive in 2006. I’m a lifelong tabletop & RPG gaming enthusiast, and internet publisher working to entertain and inform my readers every day. I've been playing RPGs and Tabletop Games since the 1970s. I'm been playing and covering Warhammer and Warhammer 40K for over 35 years.
Advertisement
Armylists Interview Tournaments Warhammer 40k Witch Hunters
Advertisement 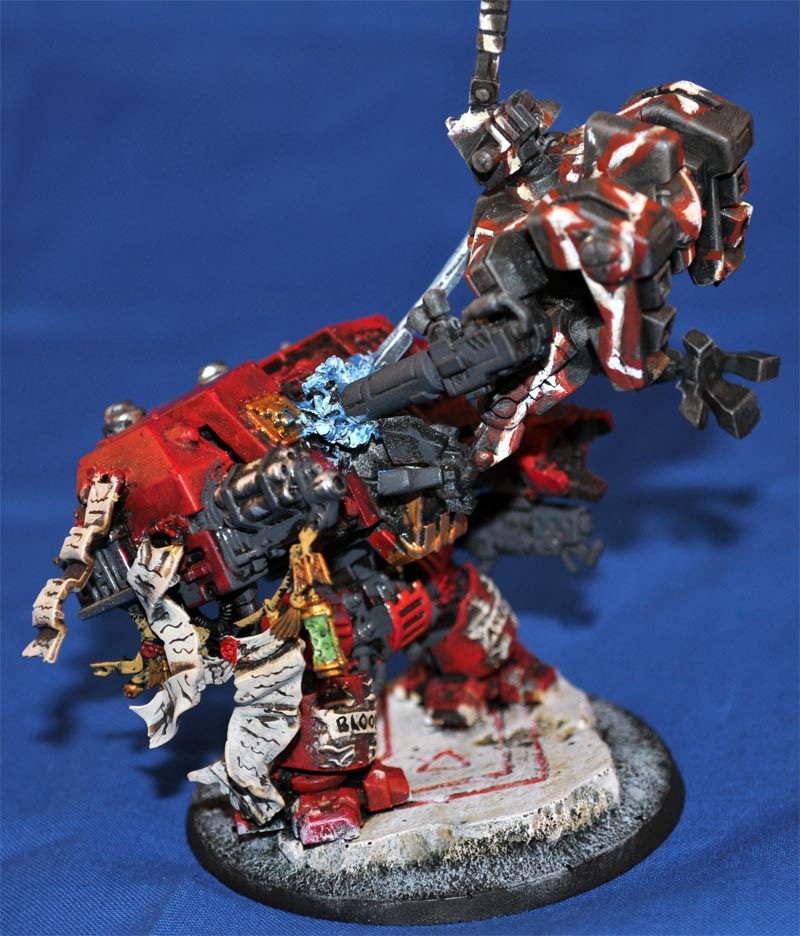