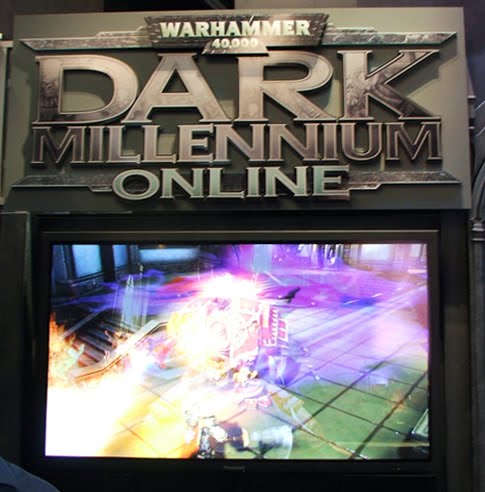 Now lets continue with part two of our E3 coverage, a Dark Millennium interview with THQ shared with us by our friends at Game Kudos.  Lets get to it:

The first thing to understand about the E3 Expo is that it is nothing if not utter chaos, and not the good kind we like to depict on the tabletop with our miniatures in 40K battles.

When I walk up to the THQ press desk on Wednesday to confirm a 3:30 p.m. appointment, not only do they have no record of an appointment for my website, Game Kudos, but getting someone to confirm that takes inside of twenty minutes as the PR reps behind the desk dart back and forth between THQ employees and members of the press.

I finally get the attention of a senior PR rep and she grabs onto a guy with a shaved head and a cup of coffee in his hand and says “This is Dennis, he’s supposed to be doing an interview with us.” The guy looks at me and I extend my hand. “I’d like to interview someone about the Warhammer 40,000 MMO.”

It turns out I’d just met Tim Holman, Director of Online Production for THQ. He takes me by the shoulder and says “Come here, I’ll find someone for you to talk to.” While I wait, I get to watch someone suiting up in the Ultramarine costume that ran on the photo gallery yesterday.

Tim comes back and says “Here, head up the stairs.” Suddenly I’m standing over the entire South Hall of the E3 floor show. I’d have stopped to take a picture but it would have been exceptionally rude and unprofessional considering Tim had not only made the time for this impromptu interview but also brought Tim Campbell, Executive Producer of Vigil Games, and Georgina Verdon, THQ’s Director of Global Brand Management.

As Tim makes the introductions and we all exchange our credentials, I’m struck by how huge this is. The only Dark Millennium material in the entire THQ pavilion is a trailer playing on a screen and a really cool sculpture next to it. The press kit DVD Tim gave me later had some screenshots which I’ve embedded in the article here for you, but that was it. Discussing Dark Millennium was clearly not on THQ’s agenda for the E3 expo – but these three people spontaneously made the time to do so. It doesn’t take long for me to figure out why. They love 40K. The game is a couple of years out, so the press embargo is extremely tight. I am not going to walk away with information about classes, combat mechanics, vehicles, or the number of worlds in the game. This is made very clear to me from the outset. “We have a lot to talk about with this game,” Tim Campbell says. “We want to make sure we can let the conversation unfold. We have to be very guided and smart about it.”
One of the big questions I’ve seen everyone ask online is whether or not we’re going to have to play as a member of the Imperium in one form or another. Are we all going to have to be Imperial Guardsmen, Space Marines, or Inquisitors? I press gently on this point and Georgina Verdon is willing to break the embargo just a little. No, we are not going to have to play as a human from the beginning. When I ask her which brand of Xenos would be available to us, for instance the Orks or Eldar, she grins and says “We won’t be making all the races playable at first. We have to leave something for expansions.” The fact that the press kit has pictures of what looks like an Ork camp might be a hint in this direction. Part of the reason why they aren’t willing to share many details with me is because there are so many details to be worked out during the production of this game. Having identified myself as a 40K player, Tim Holman says “You know that if we laid all the 40K lore on top of one another the stack of books would hit the ceiling.” Considering the height of the ceiling of the Expo’s South Hall, it’s an appropriate image.
“When you’re making a game like this the IP owner has usually exited the building, but Games Workshop is an important party in our development. We’re friends with them,” Tim says. “It’s a great working relationship. It’s not all business when we call them, but more like ‘Hey! What’s going on!?’”

“Games Workshop calls the shots per changes,” Verdon says. “If they tell us to change something, it doesn’t matter if we’ve already dropped the code. It gets changed or comes out. It’s a testament to the way GW values and protects their IP.” In other words, extreme attention to detail is being paid. That paid off big in games like Dawn of War and Dawn of War II, and if that’s the target being set for an MMO we’re likely to get a product that truly steeps us in 40K lore. I raise this point about how well DoW and Dow II conveyed the universe of 40K to the point where, on a personal note, playing the first game was directly responsible for my getting involved in the tabletop version. Georgina Verdon’s face lights up as I tell her the story.

“I had never even heard of 40K before I played Dawn of War: Winter Assault,” she says. “I wasn’t even an RTS player, but I fell in love with the gameplay. The game drew me in and exposed me to a new universe.”
“But do you play 40K, now?” I ask her. “I play Space Wolves,” she answers without missing a beat.

When I follow up with a question as to how much more challenging it is to adhere to the same level of canonical detail that DoW and DoW II presented in a game the scale of an MMO, Georgina doesn’t seem concerned in the least. “That’s just it,” Verdon says. “With the technology we have available to us now, we can finally do justice to the world of Warhammer 40,000.” The trailer for the game is all in-game assets, and Verdon is quick to point out how good the game already looks this early into production.

I spend a good deal of time listening to Tim Holman geek out on 40K while Tim Campbell watches with guarded amusement. Considering Campbell is leading the actual development team from Vigil Games, I couldn’t blame him for perhaps being a little concerned about what might be said about Dark Millennium at this meeting, considering it was really his baby we were discussing; or perhaps he hadn’t had the chance before to really soak in the level of 40K devotion that exists among its fans.

“When I was over at Relic [the developers of the Dawn of War and Space Marine],” Tim Holman tells me excitedly, “one of the engineers was actually molding his own parts for 40K models. They had a room that someone walked into one day and said ‘This is the 40K room,’ and they’d play the tabletop game in there. Now, we must have at least a hundred guys on the Dark Millennium team who paint armies. I paint armies. The Executive Vice President of THQ paints armies!” At this point things are beginning to feel downright chummy, so I decide to test the limits of the embargo once more. I ask whether they can tell me anything about the PvP aspect of the game, whether battles will be limited to instanced zones, or whether confrontations will have a larger effect on the game world.

“Details about PvP will be answered later,” Georgina Verdon says, “but we have playable code for battleground scenarios already.”
“People in California are fighting people in Austin,” Tim Holman says. “We have over 40 hours of gameplay footage that we had to boil down to about 30 seconds for the trailer.”
“A battleground is in there, it’s working, and it’s [email protected]&#ing awesome,” Verdon laughs. When I ask about a rough anticipated release date, Tim Campbell’s answer is immediate. “We’ll ship when it’s done,” he says. “You can’t invest the kind of money we’ve invested into this game and then rush the ship date.”

“The long partnership with THQ has really raised the bar on the quality Games Workshop expects,” Tim Holman says. “That’s a tall order, because Dawn of War set the bar very high for any Warhammer 40,000 game to come after it.” It isn’t just about what Games Workshop expects, however. The respect for the 40K universe among the staff at THQ serves as a metric by which projects are judged even before they get put under the critical lens of the IP holder.

“We’ve stopped production on 40K games we’ve prototyped because they weren’t good enough for us,” Holman says. “Those weren’t GW decisions. Those were internal.” The clear love of the universe that I felt during the interview reminded me of sitting at a table with some of my wargaming friends and discussing 40K. Vigil and THQ are looking at the details, concerning themselves with the little things and making sure they get them right not only for Games Workshop, but also for themselves as fans of the tabletop game.

If they don’t want to give details right now, I don’t think it’s entirely on account of a press embargo levied by the PR department. I think they want to give themselves the necessary leeway to make fine-tuned adjustments before releasing announcements. As a journalist, it’s frustrating. As a 40K fan, it’s downright encouraging.

I thank everyone for their time, and Tim leads me back down the stairs and through the press area. As we part company, Tim tells me the one thing he really wants the fans to know: “The game’s already fun.” If that’s a sign of things to come, then we’ll all be pleased. If not, I may have to send Tim to talk to this guy: Dennis Scimeca is the Editor in Chief of the English gaming website Game Kudos. He has been playing Warhammer 40,000 for four years.

Author: Larry Vela
Dad, Gamer, Publisher, Pilot, Texan. All games all the time since junior-high. I started BoLS Interactive in 2006. I’m a lifelong tabletop & RPG gaming enthusiast, and internet publisher working to entertain and inform my readers every day. I've been playing RPGs and Tabletop Games since the 1970s. I'm been playing and covering Warhammer and Warhammer 40K for over 35 years.
Advertisement
Video Games Warhammer 40k
Advertisement 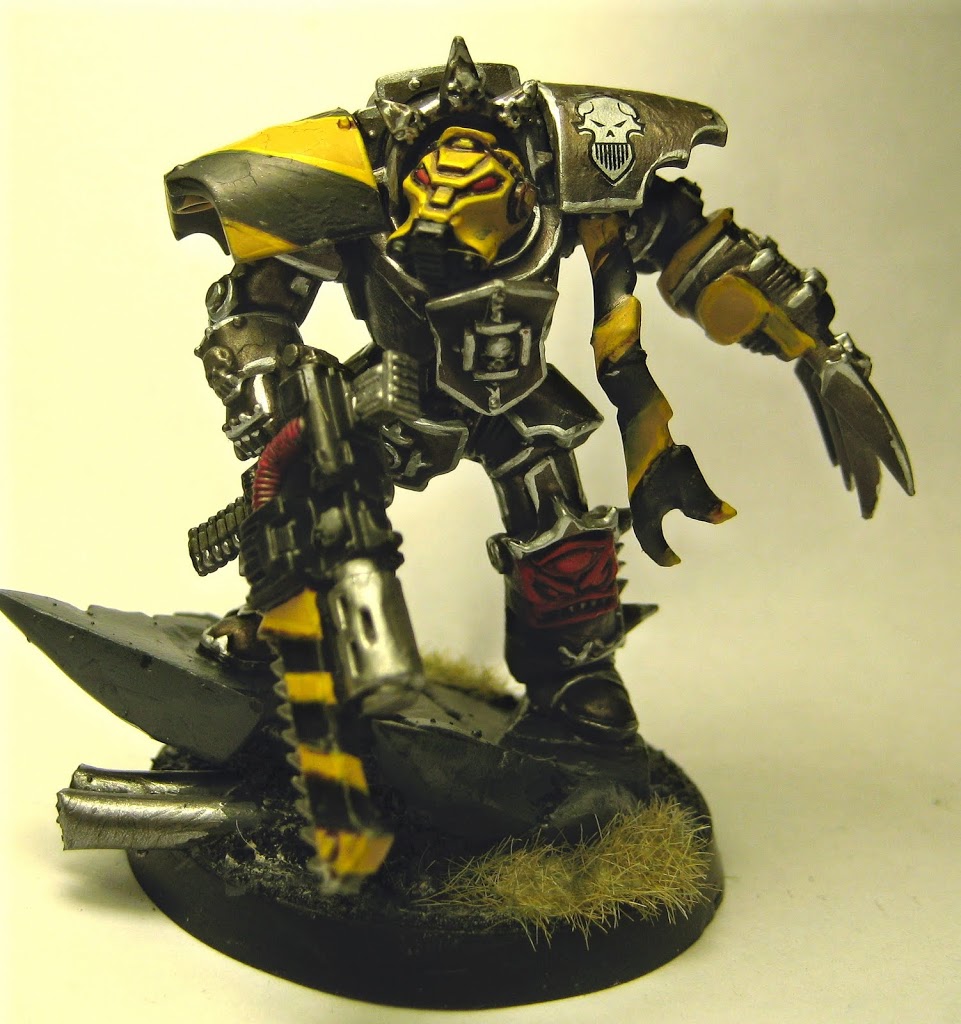