Goatboy here as usual with some 40k thoughts. So what I want to talk about today is, is spam really that bad?

We all know that everyone has a different opinion on making a hard list. We also know everyone has different opinions on what makes for a fun game. That could include crushing all spirit from the game as well as being that screaming Ork player who has drank too much mushroom brew and can never quite win a game.

So let’s look at some of the things that spam does for the opposite player beyond frustrate the internet with splitting the group into Ardcore internet bad guys and fluff bunny kiddie pool criers.

1. Spam lists do one thing, and usually only that one thing.

When you see a spammed army, you can see exactly what your opponent is planning. If they have a ton of guns, then you know that most likely they are going to stay back and shoot. Now I know this is a viable strategy and a way to win the game, but if you know this is all the army is good for, you know what your opponent is planning. Now of course, your army could not make use of that knowledge advantage, but it is still there. Copy and pasted units and lists are pretty easy to figure out and if you can stop their route of victory you could create your own victory dance.

2. Spam has a plan, so if you disrupt that plan the spam will fall like a house of (salty) cards.

I have seen a lot of spam lists eat it when a true assault unit gets into their midst. I know this doesn’t happen all the time as when you have enough guns in the list you could still roll a 1, 2, or 3. But there are times, when the stars aren’t aligned and the guns just don’t have the heat they should. So you come in, get in their face and slap the crap out of them. If you break their one sided plan you can easily control the game and put the player on their back as their supposed gun or maybe assault superiority should have won them the game.

When you see spam lists, there are no surprises hidden in there. When you see 3 of the same unit, you know that unit is going to do one thing. Without any kind of tactical surprise you will know how the game goes with some practice. Now this isn’t very interesting in my own opinion, but is something you can guarantee on. That big pile of spam is always going to be a big pile of it.

Goatboy learns to put down the Spam
So there are some things that Spam will always do. Of course I have been known to write a lot of Spam heavy lists. The new 5th edition codexes have created a lot of jack of all trade style choices that can really push the idea of spamming. Which I don’t think is always completely boring. An army would normally take what works, so why deviate from that.

As I have started to play more and more I have really tried to push away from a lot of copy paste lists as I just find them rather, well uninteresting. This game is really about having fun and creating a boring game where I can figure out the outcome by turn two is not that exciting. Now if you want me to bring the pain I will bring it, but lately I think we have become a little bit to obsessed with trying to figure out the paper to the rock.

I really enjoy seeing lists that make me think the player is insane for throwing that on the table and somehow winning. These “WTF” type of lists bring a lot of nerd rage, and internet spite. I wonder if things would be better if there was an actual highlander style tournament. Something that stressed strategy over list superiority. I personally know some players who win with lists I find rather revolting and other players that could probably win with a paper sack, a worn sock, and maybe some Necrons on the side.

So today – I want you to post in the comments a “Highlander list”. You can only duplicate 2 troop units with the exact same set up. You can have two of the same troops, but the gear needs to be different in the squad and the points need to be different by at least 20 points (so no meltabombs on one sergeant etc). 1500-2000 point limit. I want to see what people come up with and the chance for synergy with all the different options in a codex. I know not all the codexes will be as easy to do as some of the new ones, but give it a shot, and come up with some cools lists that will keep the spammers on thier toes. As usual Questions? 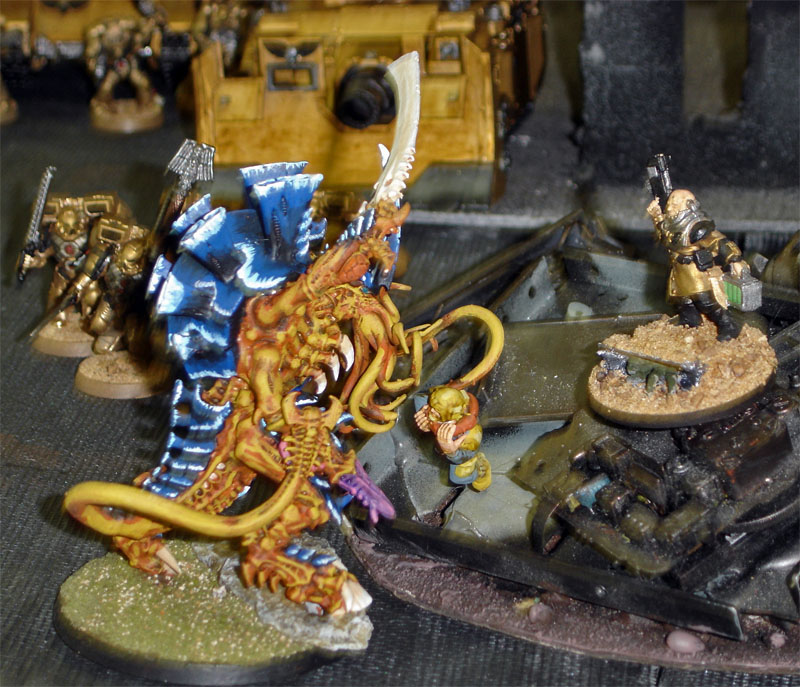