++Airbrush Types++
Posted by: Grey_Death
Last week was Airbrush Week at The Painting Corps.  Head over and check out a full week’s worth of articles dedicated to Airbrushing.
All around the web people in the wargaming community are getting more and more interested in adding an airbrush to their repertoire of tools.  To help aid those still in need of an airbrush decision, we’re going to go over some of the options, and then opening the floor to everyone to add in their two cents on each!
So where do you start?  First you need to know your needs.  What will you be using your airbrush for?  Do you just want something to help you throw down a quick base color on a squad or army?  Have plans to do some color modulation on some armor?  Want to be able to highlight and shade a single figure?  If you’re wishing to be able to grow as an airbrush user, you’ll want to start off higher up the quality scale.  As a newer airbrush user, I can attest to the wanting more airbrush soon after I started!
Single Action Siphon Fed Airbrushes The most basic of airbrush kits and usually the cheapest of the bunch, single action airbrushes only give you control over the airflow, not your paint flow.  When you press the trigger down, you’re getting the full blast of paint coming full force from the airbrush.  Being siphon fed, you end up using far more paint than you would like if you were trying to do smaller areas or models that should only use a few small drops, instead, you’re forced to waste paint in order to get it to the airbrush tip.  Siphon fed airbrushes do allow for a lot more paint to be sprayed in one batch as compared to a gravity fed brush which are usually limited in their paint capacity.  Using pots instead of a cup allows for you to spray nearly your entire force in one go.  If you’re in the need for an army base-coating tool, and not much else, this type could do the trick.  Examples: Paasche Model H | Iwata SAR
Double Action Siphon Fed Airbrushes Double action airbrushes are really the main entry point for many people, and while it’s still siphon fed and susceptible to the same issue of waste as the single action, you gain much more control.  Double action airbrushes give you control over the air (pressing down on the trigger) and the amount of paint coming out (pulling back on the trigger).  While you do gain a good amount of control over your spray/spread/lines there is still issue with control from the style of feed.  On occasions I find myself waiting for the paint to feed through the siphon, even when using the metal paint cup, only to have a large blast of paint once the paint catches up again.  But again, siphon feeds do excel in batch painting.  I am currently using one to good effect. But with the noted pitfall of having a siphon feed, I’m looking to upgrade in the near future.  Examples: Paasche VL | Iwata’s  HP-BCS
Double Action Gravity Fed Airbrushes For all the needs of a wargamer, military modelers, model train enthusiasts, double action gravity fed airbrushes are the gold standard.  Many of these tend to be at the high end of quality for their respective manufacturers.  Consistency is the big seller for these.  The paint being brought to the needle by gravity instead of pulling the paint from the pot or cup.  This allows better control, finer lines, more detail.  Examples:  Paasche Talon | Iwata Eclipse HP-CS
This guide is far from complete, but it hits many of the most important aspects for many wargaming modelers looking to make a first buy.  I’ve included the links as examples from two well known companies, don’t think that this is all that’s out there!  Be sure you compare and contrast your airbrush choice and find the one that will meet all of your needs at the price you can afford.
Be sure to visit The Painting Corps for great advice and experience that our readers are leaving in the comments. Head over and join the conversation! 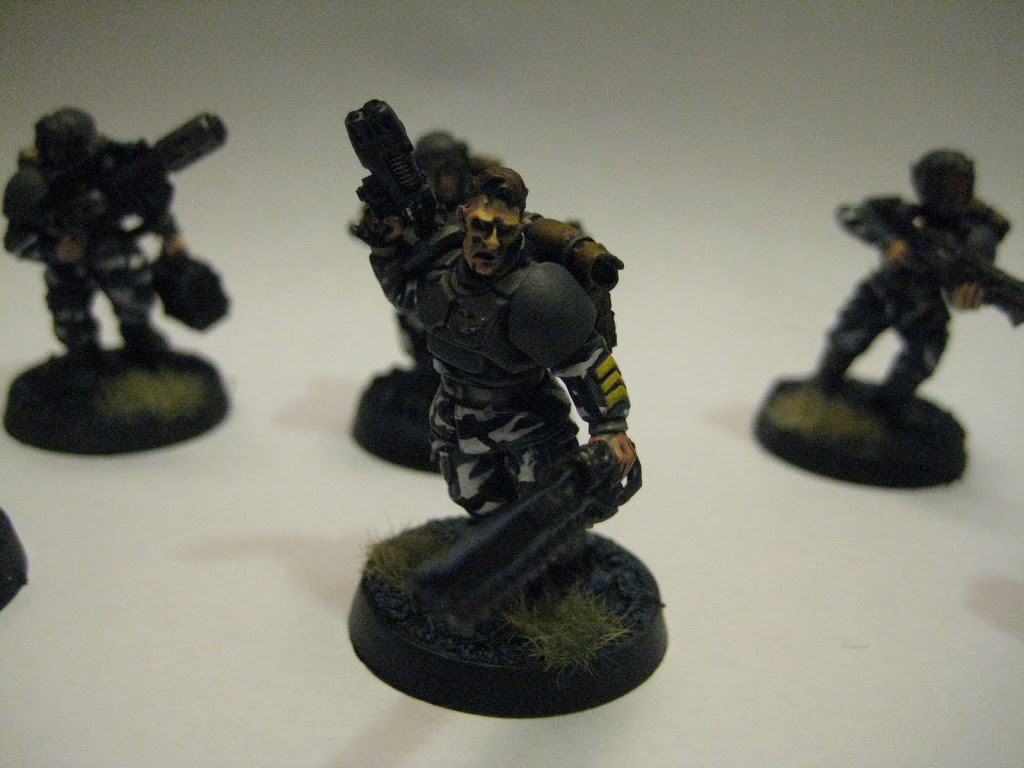