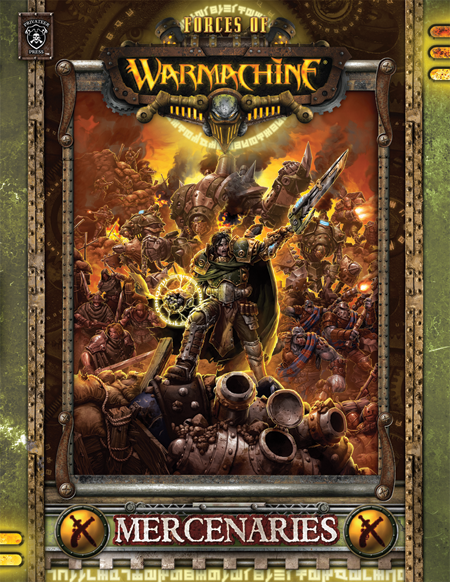 The new Mercenaries book has just hit store shelves, so here’s the low down on the latest for the sell-swords of the Iron Kingdoms.

It continues the high quality we’ve come to expect from the force books with their gorgeous art and impressive miniature galleries. This one, perhaps more than the others, stands out as one for those who love to read about the Iron Kingdoms world. All the various character units and solos have their own entries and background to read. In addition, the sheer number of mercenaries means that this book is a full 32 pages longer than the previous force books. Also unlike the other books we’ve seen, this one’s opening fiction piece does not continue the previous storyline, but instead is a self contained short story about Immoren’s newest action hero Drake McBain. Its one no Mercenary player should miss as it gives a very entertaining account of what a typical few days on the front are like for a Warcaster for hire. The background section also contains far more information about the Mercenary tradition than has ever seen print. In addition to general knowledge that ties these forces into their world’s history, we also get more specific tidbits about things like the Steelhead Company and Four Star Syndicate.

This book also has a somewhat different format from the previous volumes in its series. Not surprising since Mercenaries don’t function quite the same as the more coherent armies of the actual nations of Immoren. The model entries are divided into three sections: Mercenaries of the Iron Kingdoms, Pirates of the Broken Coast, and the Mercenaries of Rhul, with each section getting its own background description. The Pirate section explains how the Mercenary Privateer’s function in relation to the various nations on the Iron Kingdoms. The Mercenaries of Rhul section gives a good deal of information about the Dwarven people themselves in addition to explaining their own Mercenary traditions, and how they came to fight for the kingdoms of men.

Finally there are the tier lists. One of the things those of you familiar with a Mercenary force may be wondering is how those tiers will interact with pre-existing contracts like Highborn, Searforge, and so on. The simple answer is that they don’t. You have to decide when building your army whether you will pick a tier or a contract. With that out of the way, the Mercenary tier lists seem on a whole more balanced than some of the other books, with most of them offering a fair give and take of benefits over selection while maintaining the feel and character they should. Here are a few bits and pieces. Shae’s Tier, which was already shown in the May issue of No Quarter Magazine, sticks out to me as the best of the bunch offering many useful benefits including discounts on the solos a privateer force wants to take anyway, while only removing a few choices from the table in exchange. And while we’re on Privateers, Bartolo Montador’s tiers also offer very useful benefits (such as a discount on Mariner’s for Tier 1) provided you stick to privateer units and only take ‘jacks with ranged weapons. Searforge players should be happy as well. Gorten Grundback’s tier gives a free High Shield UA, and even better deployment advantages to those willing to bulk up on High Shields and forgo the Ogrun solo Gudrun the Wanderer. Durgen Madhammer gets cheaper Avalancher warjacks and an extra Artillery Corps for each Forge Guard unit he takes. Toss on Herne and Jonne and they and the Artillery Corps get advanced move. Unfortunately he can only take heavy warjacks meaning Gunners and Blasters are off the table. Ashlynn’s tiers are very Gun Mage friendly and include models with notable ties to Cygnar and Llael along with a few others who I guess are just there for the coin. McBain’s “Soldiers of Fortune” tiers give discounts on character units though lacks one of my favorites, Boomhowler’s, as a potential choice. All in all they definitely reflect the flavor of their Warcasters and look to be a lot of fun to play.

Finally those few inevitable disappointing bits. First off, all the models contained in the Mercenary book have already been released, Drake McBain being the last to hit store shelves. With no new Mercenary releases in sight through to September it seemed very unlikely that there would be anything new, but that hadn’t stopped me from keeping my fingers crossed right up until the end. Secondly, there are no pictures of plastic mercenary ‘jack resculpts in the gallery section. Since Privateer Press has never said we should expect them this was also predictable, but I had been hoping to see them nonetheless. And lastly, for those fans of allies, there is still no sign of any Cephalyx or their Drudges in Mercenary contracts. Just leaves me wondering what Warcaster we’ll eventually see on the horizon that finally gets to bring these guys along. They must have the Ally rule for a reason right?

~ Hope you enjoyed this preview of the latest Forces of Warmachine book. While a few stores managed to get their hands on it already, for those of you haven’t spotted a copy in your LGS the official release date is Wednesday July 7th. Hope this stuff was still news to you!

Author: Ben Williams
Ben Willimans is a Professional Painter and Columnist at Bell of Lost Souls. He has been involved in the hobby and art side of miniatures and the tabletop gaming industry for over 20 years. He has won multiple national painting awards.
Advertisement
Mercenaries Review Tabletop News Warmachine-Hordes
Advertisement

A Tale of Two MMOs