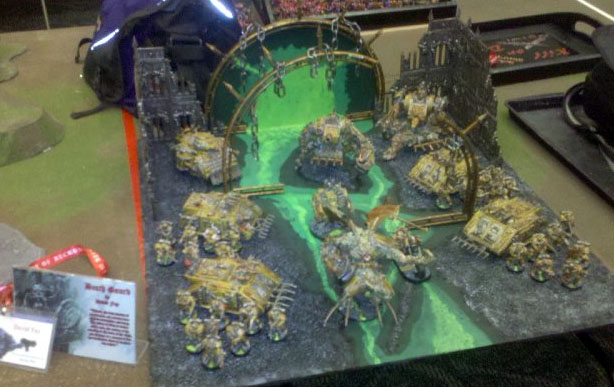 Reecius (Reece Robbins) here with some more interviews with our fellow wargamers. I was able to catch them for some 40K talk and get their input into what makes them such effective tournament players and what aspects of the hobby they enjoy best.

Reece: How long have you been in the hobby and what armies do you currently play?
Dave: I guess I’ve been on and off again with the hobby for the past 15 years. Some kids in High School introduced me to Warhammer Fantasy back in 4th edition. We got a lot of snow days where I used to live and that led to a lot of mega battles with silly army builds that would last the whole weekend. My first real taste of 40K was back in the 3rd edition. I started the Tau when they were first introduced, built a small force, painted it well and lost a lot of games. The people I played left a bad taste in my mouth so I sold the army with no intention of playing again. Life carried on and I was fortunate to become roommates with John Hegner , he had a spare Tyranid army and taught me how to “really” play. You can blame him for unleashing me onto the scene.

Reece: I have always been impressed by the fact that you will take a themed list to a tournament with heavy hitters and perform at such a high level. Your Death Guard, while certainly not weak, are not what most would consider to be a go for the throat tournament list. It seems that you generally like to stick to a theme but still manage to perform well. I remember you winning consistently with a pure Thousand Sons army last edition. Why do you think you are able to do this when so many others fall short?
Dave: I’m a huge fan of themed lists, I miss the sacred numbers and craft world lists but theme is quickly disappearing with each new codex. Theme is also very subjective and can sometimes border on “Broken”. For me it’s fun showing up with something no one would consider competitive and winning with it. I’m currently debating a Biovore, Venomthrope based list b/c no one takes them. My caliber of play is attributed to my close friends who share the hobby and being able to plan ahead for each worst case scenario. Reece: Would you mind sharing some of your accomplishments in the hobby with the community?
Dave: The one I’m proud of is having a fully painted army that people admire. Getting an army built and decently painted is a pretty big deal. It also encourages other people to get their stuff built and painted. In terms of tournaments this year:

Reece: What do you feel are the strengths of your Death Guard? What armies do you hope to draw in a tournament setting?
Dave: Durability and rerolls to counter my luck with dice. I hope to draw good players and that’s it.

Reece: What do you feel are the list’s weaknesses and what armies do you hope to avoid in a tournament setting?
Dave: Honestly it’s a pretty good all comers list. There are some rock, paper, scissor situations but it’s all situational based on the mission.
Lists that make it tough:

1. A lucky player: I’m known to have bad luck with dice and if they are having a lucky game there’s no counter for that.
2. Leafblower: I don’t have enough antitank and what I do have they will kill first.
3. Horde Orks: Nothing in my list can stand up to a unit of 29 Boyz and a Nob with a Power Klaw let alone 4+ units.
4. Dual Lash Max Obliterator list: That’s a lot of AP 1 & 2 and they can put me where I don’t want to be.
5. Dark Eldar Raider Spam: Toughness 5 and feel no pain is nice but Agonizers and Disintegrators negate that.
6. Lots of AV 14: relying on one Lascannon Predator makes it tough.

Reece: Roughly, what would you say is your win/loss/draw ratio with your Death Guard?
Dave: “Roughly” it’s decent. I think 85/10/5 would be a good guesstimation. Against Geoff Zatkin or Shane Hebard-Massey I tend to lose/draw a lot (They play Horde Orks or 4 Battle Wagons)

Reece: I know you play a lot of chess; do you feel that this helps you on the 40K table?
Dave: Very much so, it helped me with how much time I spend on my turns. Seeing the next turn’s moves and forcing my opponent’s moves as well. I like to trade “pieces.”

Reece: Do you try and memorize opening moves as one would in chess, or is 40K simply too dynamic to apply these tactics?
Dave: Unfortunately the 40K board is never the same and there are no set tiles to which a piece has to end on. I do however have some memorized deployments based on mission types and armies I play against.

Reece: You were the first player I knew to devise the dreaded Nidzilla list that was one of the dominant tournament lists of 4th edition. What do you look for in a new army book to pull out the effective combos?
Dave: Was it dreaded? I know that I built it right after the 4th edition codex and someone posted it on Dakka Dakka but I make no claims on being the first. When I first look at a new army book I devise what everyone else will see. Then try to build a list that bucks the curve. My brain just picks out flaws and exploits and I acknowledge them but try not to exercise them. Usually if it has a lot of fine print or special rules then I’m sure it’s effective. I’m waiting to see more Tyranid Gargolyes with a Parasite attached escorting a flying Hive Tyrant with Old Adversary to become popular. Mathhammer is fine to an extent but after all the theorizing it usually boils down to can I make a cool model and paint it.

Reece: If you were to give one piece of advice to a new player about tactics in game, what would it be?
Dave: Memorize the rules of your chosen army and everyone else’s. Reece: Thanks again, Dave, and I wanted to congratulate you again on sneaking the win over me at the Slaughter in Space GT. We tied for best overall, but you won the tie breaker by getting more favorite opponent votes than I did which shows that you are not only a skilled opponent, but a pleasure to play as well. You definitely earned that win as you played against some cut throat lists. Hopefully I will earn my Golden Ticket to the Vegas GT next month so we can get a rematch of our last encounter at the Broadside Bash GT!
Dave: Thank you Reece for taking the time to listen to my rambles. I’m sure you’ll secure a ticket and then I’ll get you round 1 in Vegas. ;-p.

Hi everybody. I hope you enjoyed the interview, and I would like to thank both Reece for putting it together, and Dave for volunteering his time and list for the piece. have at it guys.

Author: Larry Vela
Dad, Gamer, Publisher, Pilot, Texan. All games all the time since junior-high. I started BoLS Interactive in 2006. I’m a lifelong tabletop & RPG gaming enthusiast, and internet publisher working to entertain and inform my readers every day. I've been playing RPGs and Tabletop Games since the 1970s. I'm been playing and covering Warhammer and Warhammer 40K for over 35 years.
Advertisement
Chaos Marines Interview Warhammer 40k
Advertisement 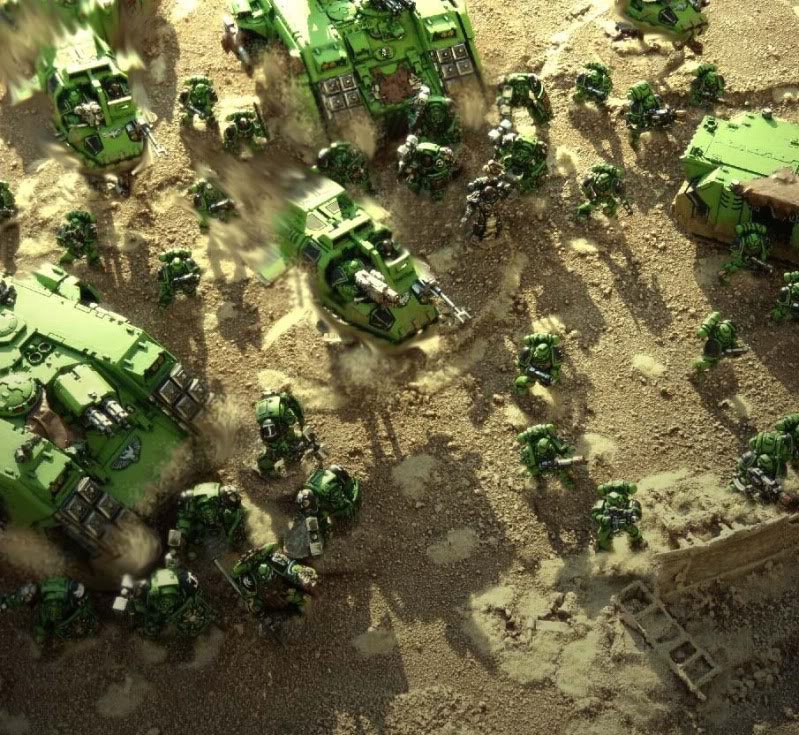