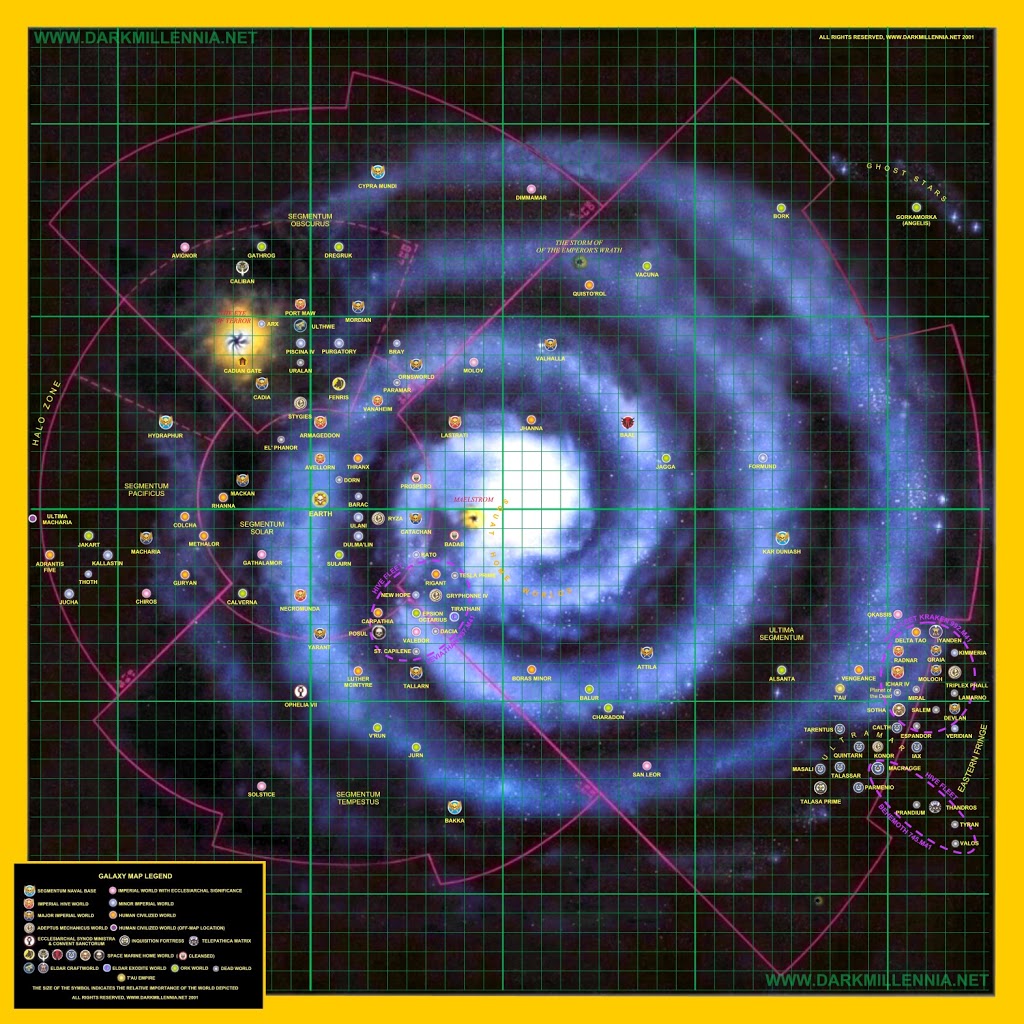 Hey everyone, it’s been a while, so without further ado let’s look at the great factions of the 41st millennium with the question “which ones constitute a superpower.”

First off it might be useful to define the term “superpower.”  In this case we of course are not referring to x-ray vision or invulnerability, but instead to the political concept of global (in this case galactic) superpowers.  The dictionary defines a superpower as:

1 : excessive or superior power
2 a: an extremely powerful nation; specifically : one of a very few dominant states in an era when the world is divided politically into these states and their satellites b : an international governing body able to enforce its will upon the most powerful states

I think we can all agree that all of the playable factions of 40k wield considerable power, but which ones actually meet the above criteria of a galactic superpower?

Imperium of Man:  Despite being rife with internal factionalism it would be hard to argue that the Imperium is NOT a superpower, and indeed it very easily meets the definitions.  It occupies or controls the single largest proportion of the galaxy (even if it is spread thinly enough that it does not actually control the overall majority of it), and it’s military might is sufficient to reliably exert its will upon almost any other single power.  Furthermore, the mere presence and historic and continued existence of this entity has shaped the development of other galactic powers, holding some in check, dictating the strategic goals of others, and even indirectly shaping the very culture of still others.  It is safe to say that the Imperium is a true galactic superpower in the 41st millennium.

Forces of Chaos: At first glance the collective Forces of Chaos would seem to represent an obvious galactic superpower.  However, upon consideration one realizes that Chaos is not possessed of any collective “political” will.  Rather it is a grouping of factions only barely united by the common derivation of their power.  In fact, as any Chaos buff knows, the Ruinous Powers and their servants (both mortal and daemonic) probably spend more time fighting each other than they do any other faction, vast ongoing daemonic wars almost constantly plague the depths of the Warp far removed from mortal comprehension, and many of the daemon worlds of the Traitor Legions and the Lost and the Damned are continual warzones as warlords vie with each other for favor and patronage of their dark masters, or simply out of petty spite.  On those occasions when the greater part of Chaos does become united, such as during the Heresy or one of the Black Crusades, it does seem to collectively meet the criteria of superpower., indeed, at such times even the mighty Imperium has to exert almost all of its power to check the spread of Chaos.  Chaos is best described as an intermittent or conditional superpower.

Orks: Again, it might be tempting to consider the Orks as a superpower, after all it has been said many times that were they to unite they would sweep all other races before them if only through sheer numbers.  Unfortunately for their candidacy, the key phrase there is “were they to unite,” classifying Orks as a superpower suffers from the same issue as Chaos and in some ways they have it worse.  Orks as a race are so scattered, divided, and organizationally unstable that the very idea of their uniting in any meaningful sense is laughable.  Indeed it might even be utterly impossible for them to do so on a fundamental level as concepts like a “national identity” are utterly alien to their purely impulse driven and utilitarian mindset.  There are of course examples of relatively stable Ork empires, the Orks of Charadon and the Empire of Octarius for instance, but these for all their significant concentrated might are too small and too isolated to exert their power over the broader galactic stage.

Tau Empire:  The Tau certainly demonstrate the unity of purpose and sense of collective national identity that are lacking in the previous two factions, indeed they are if anything more united than the Imperium.  The factors that stops the Tau cold from becoming a superpower are twofold; scale and reach.  For all their undeniable tactical capabilities and their formidable military and political clout in their immediate area of space they remain, on the grand strategic and political stage, a joke.  The Tau Empire is small and isolated, it simply does not have the manpower (or should that be taupower?) or resources to affect change on the broad galactic scale.  Further hampering their ability to overcome these issues is their lack of reach, the relatively slow (if reliable) rate of interstellar travel available to them when compared to that of the other great players seriously curtails their expansion and the length of their political arm.  Indeed, in many ways it has only been a series of lucky (some might argue suspiciously so) coincidences that have prevented the Tau from being ground from existence by one or more of the great powers of the galaxy.  In the millennia to come it remains to be seen if they Tau can overcome their hurdles and take their place on the galactic stage, but for now they are firmly relegated to the position of minor power.

Eldar: While in the past the Eldar unquestionably held a position of primacy that could only be compared to that now held by humanity the Eldar of the 41st millennium are a more difficult case from this perspective.  At first glance their race is few and would seem to lack the sense of collective identity and purpose that would be required of a true superpower, for the most part the Craftworlds are self-contained and isolationist, both from the larger outside galaxy and even from each other.  Furthermore they also seem to lack the sense of manifest destiny that drives humanity, having lost their own empire they mostly seem to feel only either the fatalistic view that humanity is welcome to the galaxy and let them reap the fruits of their own folly and hubris, or a bitter haughty resentment of all other beings for their own fall from former greatness.  For the most part they are a race of individuals united only through the drive for survival.  Some of them (Biel Tan for example) have retained the requisite drive and unity to become major players on the galactic scale, and are quite formidable, they are in the minority.  However, their unparalleled ability to manipulate the flow of future event towards a course that favors their interests is a potent force for the exercise of political will, and the broad view of the Farseers who orchestrate ensures that the goals they seek are for the good of both the individual Craftworld and the Eldar species as a whole.  It might be best said that the Eldar are in the unique position where they do not constitute a superpower militarily, but do meet the criteria in a political sense.

Necrons: It is difficult to give an appraisal of the power wielded by the Necrons on the grand stage, if only because there are too many unanswered questions.  For one thing the full extent of their power is not yet at their command, for another their unity is debatably at best.  In the past we know that the C’tan were prone to rampant infighting, and how united they are now (or even how complete their control over their minions is) remains a mystery.  For the time being it would seem safe to say that they are not a true superpower but represent the potential to become one.

Tyranids:  Of all the factions in the 40k universe the Tyranids are (unsurprisingly) the most united in purpose, sharing as they do a single overwhelming collective will.  While their (or perhaps more properly “its”) goals seem to be relatively simplistic they are undeniably set and at odds with those of every other power in the galaxy.  They also have the numbers and power to back up these goals, and exercise against the other great powers, them even in the face of staunch resistance by other superpowers, and even coalitions of powers.  While the sheer alien-ness of their methods, goals, and mindset are difficult to understand it they undeniably seem to meet all the criteria of a superpower on the galactic stage.

There you have it, my personal military-political breakdown of the 41st millennium, what are your thoughts?  Do you strongly agree or disagree?  Does anyone feel that their own faction was not given proper consideration and would like to make their own case? 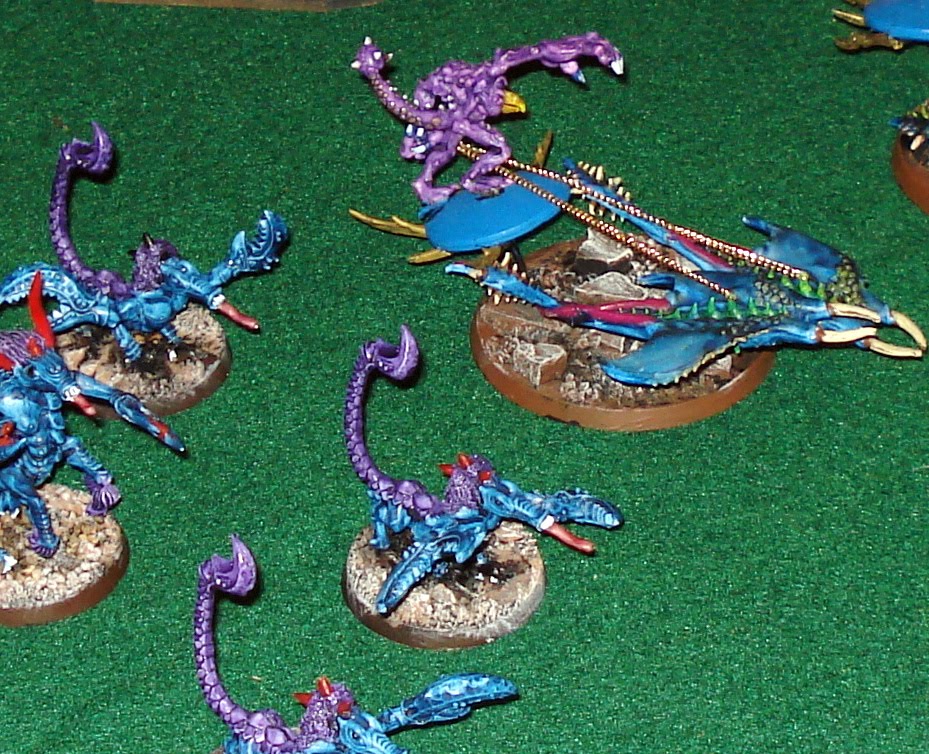