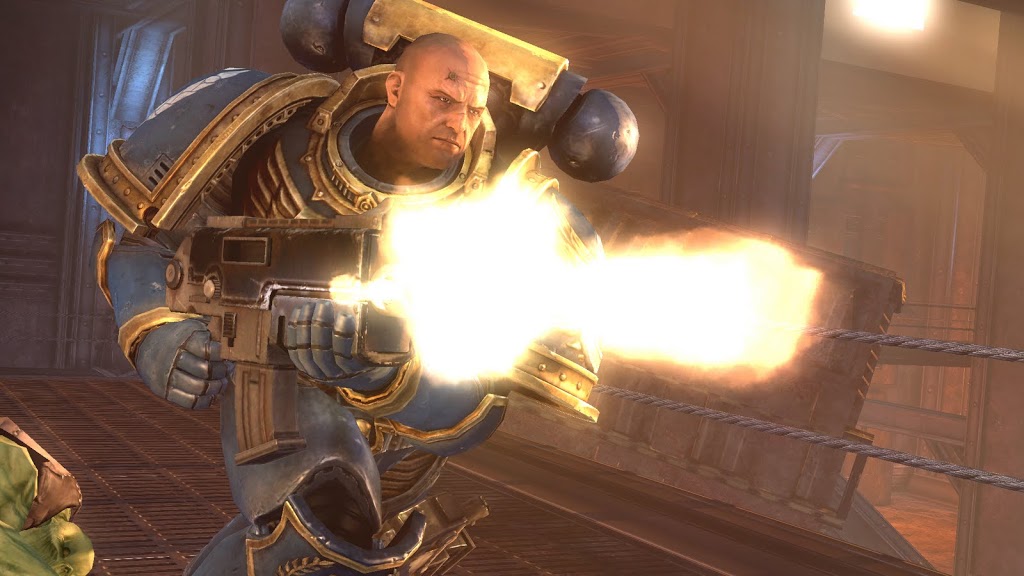 THQ just pulled back the curtain a bit on their upcoming Warhammer 40000 Space Marine video game, and boy do you want to see this.  Good stuff after the jump:

Relic Entertainment’s Warhammer 40,0000: Space Marine seems like it will be just about everything the 14 year old you has ever wanted from a Warhammer 40k video game. From the distinctive buzz saw sound of the chainsword to the cries of “For the Emperor”, this game in progress practically drips with 40k Authenticity. The game is set on an Imperial Forgeworld that has been invaded by an Ork Waaagh and due to its sensitive production abilities (it makes Warlord titans) the Ultramarines have been dispatched to keep the Orks from capturing this valuable technology until the gigantic bureaucratic gears of the Imperium turn and send a relief force of Imperial Guard. Other traditional video game reviews will say the same thing about this game – it feels very much like “Gears of Space Marine 40k”. But that is not to say that is a bad thing. Relic has fundamentally captured what it means to be and play a Space Marine for unlike many other 3rd person shooters Space Marine does not have a cover system nor does it shy away from melee. We were told that the studio felt that, “a cover system didn’t really deliver the satisfying experience of being a 7’ tall superhuman that we wanted the player to experience”. I could not agree more. The game THQ showed off had a Space Marine wading through Orks shrugging off slugga rounds left and right while he blazed away with his bolter and chainsword. The game has an excellently implemented melee system with flowed seamlessly from mowing down Orks with bolter rounds and finishing off the survivors with a few quick swipes from chainsword. Those chainsword blows usually ended with a cool finishing move of either sawing them in half or curb stomping them into death’s sweet embrace, both of which I found to be nice touches to emphasize the brutality of the game and the setting. The game begins with a your Space Marine riding in the back of an Imperial Guard Valkyrie amongst a massive flotilla of Valkyries who you are hitching a ride with to help blunt the Ork attack. You are called upon to man the door heavy bolter and help shoot down the flight of Ork stormboyz that are attacking you at several hundred miles an hour at several thousand feet. Now, first you may be asking yourself, WHAT? A MARINE WOULD NEVER RIDE IN A VALKYRIE WAAGHRBL! I asked one of the producers that exact question and he answered in the video you will see in this article but suffice to say I was more than pleased just to know that they had the debate before deciding to proceed. Anyway, your marine is cruising along gunning down Stormboyz left and right watching other Valkyries fall from the sky in flaming ruins until your ammo runs out. Being a marine you simply pull out your bolter and continue to blaze away, bring the body count to 50-60 Orks in no time. Eventually a few get on your Valkyrie and before you can say “THRONE!” you begin to plunge to your death. A mere guardsmen would be kissing his butt goodbye and praying to the Emperor but true to the fluff your Marine calmly rides the Valkyrie down and does and simple tuck and roll right before the crash comes up on his feet ready to fight all within first 5 minutes of the game. The landing gave us our first look at the backdrop and scenery of the game which is right on the mark. Buildings are impossibly large, blocky and dripping with High Gothic detail. Grimdark infects every corner of this game with statues and grandiouse archways. It felt like 40k, rubble and war everywhere along with the beginnings of Ork construction which was expertly and wisely copied from Ork structures in Dawn of War. We were shown Imperial sewers, streets and a train (in the grim darkness of the far future there is HIGH SPEED RAIL?). Anytime someone tries to translate your childhood imagination into a video game or onto the silver screen you instinctively cringe. You assume that they will change your favorite part or worse ignore it, leaving you forever crying foul over what is now considered to be the “official” way that everyone now sees your favorite story. Having now seen what I have seen I feel safe with THQ and Relic being in charge of my very favorite pastime. While watching the game play on the screen I found myself having a hard time not forming the Aquila over my chest and screaming, FOR THE EMPEROR and if that is not a ringing endorsement of a product I don’t know what is. Go check it out and be prepared to feel that same rush the first time you flamed a whole squad of orks in 40k. We would like to extend a special thank you to THQ and Relic Studios.  So who’s ready for this game after looking at those shots and videos?